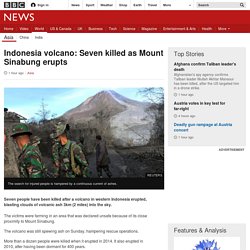 The victims were farming in an area that was declared unsafe because of its close proximity to Mount Sinabung. The volcano was still spewing ash on Sunday, hampering rescue operations. More than a dozen people were killed when it erupted in 2014. Japan earthquake of 7.4 magnitude comes 24 hours after country was hit by smaller quake. Japan has been rocked by a devastating earthquake just 24 hours after a powerful tremor killed nine people in the same part of the country. 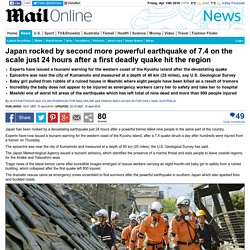 Experts have now issued a tsunami warning for the western coast of the Kyushu island, after a 7.4 quake struck a day after hundreds were injured from a tremor on Thursday. The epicentre was near the city of Kumamoto and measured at a depth of 40 km (25 miles), the U.S. Geological Survey has said. Fears of the 'big one': Volcano explodes 1.8 miles high hours after massive earthquake.

The Karymsky volcano in Russian Kamchatka's eastern volcanic zone spewed ash up to 3km into the air, according to the Regional Emergencies Ministry. 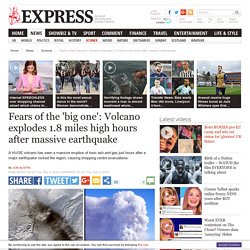 Airlines have been placed on an "orange" warning to avoid the area following today's eruption. It came less than 48 hours hours after a magnitude 7.3 earthquake tore through the region, followed by a series of at least seven less powerful aftershocks. Terrified shoppers fled from a shopping mall after feeling the tremors inside. The epicentre of the earthquake was within about 20 miles of the 1,486 metre-high magma mountain, prompting fears seismic activity is on the rise and there could be a catastrophic earthquake, volcanic eruption or both. Scientists fear 'the Big One' as four major earthquakes strike Asia in 48 hours. There have been three large earthquakes recorded in recent days, including a major one in southern Japan which destroyed buildings and left at least 45 people injured, after Myanmar was rocked on Wednesday. 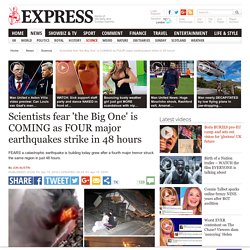 Tremors were also felt as far as 500 miles away at the national park in India where the Royal couple Kate and William were visiting. Yesterday, The Japanese Red Cross Kumamoto Hospital confirmed 45 were injured, including five with serious injuries after a quake of magnitude 6.2 to 6.5 and a series of strong aftershocks ripped through Kumamoto city.

Several buildings were damaged or destroyed and at least six people are believed to be trapped under homes in Mashiki. Real life Mordor as volcano shots resemble Lord Of The Rings scenes. These spectacular pictures show a volcano erupting in the India Ocean amid scenes resembling the fiery landscape of Mordor in Lord of the Rings. 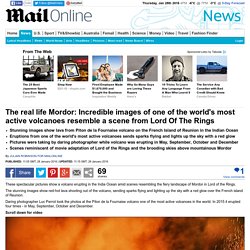 The stunning images show red-hot lava shooting out of the volcano, sending sparks flying and lighting up the sky with a red glow over the French island of Reunion. Daring photographer Luc Perrot took the photos at the Piton de la Fournaise volcano one of the most active volcanoes in the world. In 2015 it erupted four times - in May, September, October and December. Scroll down for video. Experts work to determine what's causing all the earthquakes. NORMAN, Okla. 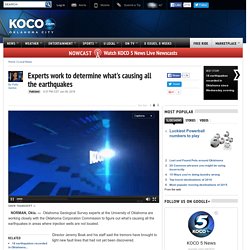 —Oklahoma Geological Survey experts at the University of Oklahoma are working closely with the Oklahoma Corporation Commission to figure out what’s causing all the earthquakes in areas where injection wells are not located. Director Jeremy Boak and his staff said the tremors have brought to light new fault lines that had not yet been discovered. “We’ve been working hard to delineate as many faults as we can in Oklahoma," he said. 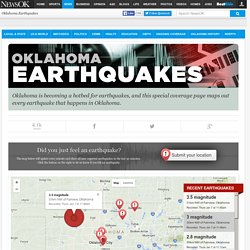 Several more over 3.0 magnitude have been reported Thursday. By Matt Dinger Staff Writer mdinger@oklahoman.com | Updated: 6 hr ago Two sizable earthquakes were recorded within seconds of one another late Wednesday, with a pair of weaker quakes on their heels. FROM STAFF REPORTS | Updated: Tue, Jan 5, 2016 Did you know earthquake insurance may not cover masonry and may not go into effect until 10 percent of the cost of your house is affected? Today's Earthquakes in Oklahoma, United States. Water injected underground in OK causing 'quakes. Earthquakes today. 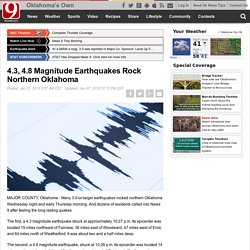 And dozens of residents called into News 9 after feeling the long lasting quakes. The first, a 4.3 magnitude earthquake struck at approximately 10:27 p.m. Earthquakes in Oklahoma. Pictures of Mount Sangean Api's 12-mile-high ash cloud over Indonesian island. Mount Sangean Api erupted on Friday, sending ash spewing an estimated 12 miles into the sky above IndonesiaStunning images of the massive ash cloud were captured by a group of tourists on a yacht 10 miles awayFallout of ash from Sangean Api has caused major disruption to flights in Indonesia and northern Australia By John Hall Published: 03:02 GMT, 2 June 2014 | Updated: 10:46 GMT, 2 June 2014. 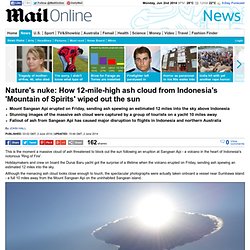 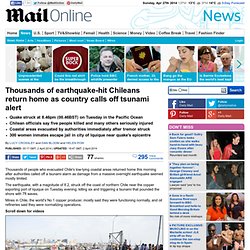 The earthquake, with a magnitude of 8.2, struck off the coast of northern Chile near the copper exporting port of Iquique on Tuesday evening, killing six and triggering a tsunami that pounded the shore with 7ft waves. Mines in Chile, the world's No 1 copper producer, mostly said they were functioning normally, and oil refineries said they were normalizing operations. Scroll down for videos. First Images of the Tolbachik Fissure Eruption. I’m in California now, but I thought I’d write a brief post with an image of the Tolbachik eruption in Kamchatka. KVERT posted a few images today, including a show of the two fissures with accompanying ~3 km / 9,800 ft ash plumes.

The description of the eruption indicates that it is centered in the southern cone area. The reports from observations on the ground suggest that it started as a series of discrete eruptions that coalesced into the two fissures — a common occurrence for this style of eruptive activity (see Kilauea). This seems to suggest that Tolbachik is having an eruption similar in style to the 1975-76 eruptions — however, the magnitude of this new eruption is still very unclear. There appears to be significant SO2 from this eruption as well, according to reports from the USGS/AVO.

Terra/MODIS image of the Tolbachik eruption, seen on November 29, 2012. 10 Most Active Volcanoes. Pressure in Mount Fuji is now higher than last eruption, warn experts. The pressure in Mount Fuji's magma chamber is now higher than it was in 1707, the last time the nearly 4,000-metre-high Japanese volcano erupted, causing volcanologists to speculate that a disaster is imminent. The new readings, taken by the National Research Institute for Earth Science and Disaster Prevention, reveal that the pressure is at 1.6 megapascals, nearly 16 times the 0.1 megapascals it takes to trigger an eruption.

This, lead volcanologist on the case Eisuke Fujita told Kyodo News, is "not a small figure". Don't miss: Geologists find fault system that could be first signs of future supercontinent. Japan Today: Mt Fuji may erupt by 2015, says Ryukyu University professor. Jan. 09, 2013 - 03:00PM JST Since the Great Tohoku Earthquake of March 2011, scientists have been anxiously watching the massive volcano known as Mt Fuji for signs of activity. In September of last year, a report was released stating that Mt Fuji’s magma chamber pressure had risen to a worrisome 1.6 megapascals, which is estimated to be higher than when it last erupted.

According to retired professor Masaki Kimura of Ryukyu University, this and other recent phenomena indicate an eruption of Mt Fuji should have taken place in 2011 with a four-year margin of error ending in 2015. First, a little background on Mt Fuji. Mount Sakurajima eruption: Impressive ash cloud reaches for the sky as Japanese volcano erupts for the 500th time this YEAR. By Rebecca Seales Published: 15:36 GMT, 18 August 2013 | Updated: 18:05 GMT, 19 August 2013 These ominous pictures show volcanic smoke billowing from one of Japan's most active volcanoes, Mount Sakurajima, captured as its erupted for the 500th time this year. At 5000m, this is the highest plume of ash recorded from the mountain since 1955, and caused darkness and ash falls over the centre of nearby Kagoshima city. Mount Bromo spews red smoke. By Mail Foreign Service Published: 11:41 GMT, 7 May 2013 | Updated: 16:40 GMT, 7 May 2013 Billowing brilliant red smoke over the blanched plain, it is the only sign of life in this otherworldly landscape.

And Mount Bromo, on the Indonesian island of East Java, is such an extraordinary site thousands of tourists visit every year to enjoy breathtaking vistas across the Tengger massif to the misty peaks beyond. Amazing time lapse video shows dramatic moment one of the world's most dangerous volcanoes explodes into life. Copahue Volcano Threatens Eruption as Chile, Argentina Towns Evacuate. Officials in Chile and Argentina ordered more than 2,500 people to leave their homes as Copahue volcano threatened to erupt on Monday (May 27).

The volcano is at red alert status, meaning an eruption could be imminent, according to Chile's Geological Survey. The volcano has erupted several times in the past 100 years, and has been spewing steam and ash on and off since Dec. 22, 2012. Towns near the 9,833-foot (2,997 meters) summit could be hit by fast-moving lahars (a debris flow of water and volcanic rock), volcanic bombs and lava flows. Mount Etna eruption: Italy's night sky lit up as volcano spews lava. By Hugo Gye Published: 08:31 GMT, 7 March 2013 | Updated: 10:13 GMT, 7 March 2013. Mt Tongariro has erupted, again: New Zealand's 'Mount Doom' volcano from Lord of the Rings erupts. State TV: Three dead after quake hits Iran, near nuclear site.