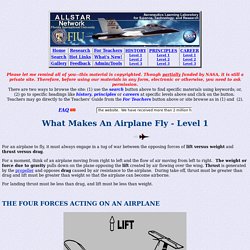 Though partially funded by NASA, it is still a private site. Therefore, before using our materials in any form, electronic or otherwise, you need to ask permission. There are two ways to browse the site: (1) use the search button above to find specific materials using keywords; or, (2) go to specific headings like history, principles or careers at specific levels above and click on the button. Teachers may go directly to the Teachers' Guide from the For Teachers button above or site browse as in (1) and (2). For an airplane to fly, it must always engage in a tug of war between the opposing forces of lift versus weight and thrust versus drag. For a moment, think of an airplane moving from right to left and the flow of air moving from left to right. 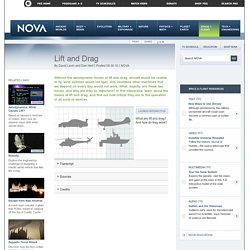 And how do they work? Explore how these two aerodynamic forces are created, and learn how engineers factor them in when designing all kinds of machines. Lift and Drag Explained In order for an object to fly in a stable manner, it needs to balance four forces: lift, drag, thrust, and weight. Weight, of course, comes from gravity pulling down on the object. But lift and drag can only arise as air moves past an object. Lift: The Bernoulli Effect A Difference in Pressure At least two forces combine to cause lift--the Bernoulli Effect and Newton's Third Law of Motion. As an airfoil moves, its shape and angle force oncoming air to curve as it passes the airfoil's top side.

As the speed of air increases, its pressure drops. The curved airflow generates more pressure below the airfoil than above, and the airfoil is pushed upward. Lift: Newton's Third Law of Motion Opposing Forces An airfoil also creates lift by "bending" or redirecting airflow. Drag Airfoil Design. Exhibitions. Exhibitions. Smithsonian X 3D. The Smithsonian X 3D Explorer is a modern 3D web application. 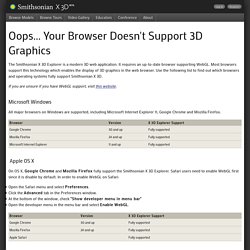 It requires an up-to-date browser supporting WebGL. Most browsers support this technology which enables the display of 3D graphics in the web browser. Use the following list to find out which browsers and operating systems fully support Smithsonian X 3D. If you are unsure if you have WebGL support, visit this website. Microsoft Windows All major browsers on Windows are supported, including Microsoft Internet Explorer 11, Google Chrome and Mozilla Firefox. 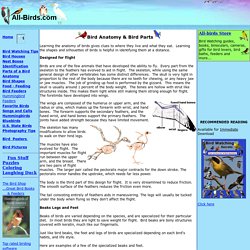 Learning the shapes and silhouettes of birds is helpful in identifying them at a distance. Designed for flight Birds are one of the few animals that have developed the ability to fly. Every part from the skeleton to the feathers has evolved to aid in flight. The skeleton, while using the same general design of other vertebrates has some distinct differences. The wings are composed of the humerus or upper arm, and the radius or ulna, which makes up the forearm with wrist, and hand bones. The skeleton has many modifications to allow birds to walk on their hind legs. 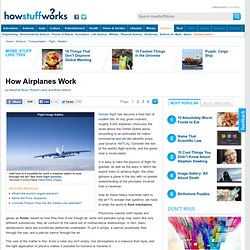 At any given moment, roughly 5,000 airplanes crisscross the skies above the United States alone, amounting to an estimated 64 million commercial and private takeoffs every year [source: NATCA]. Consider the rest of the world's flight activity, and the grand total is incalculable. It is easy to take the physics of flight for granted, as well as the ways in which we exploit them to achieve flight. We often glimpse a plane in the sky with no greater understanding of the principles involved than a caveman.

How do these heavy machines take to the air? Physicists classify both liquids and gases as fluids, based on how they flow. The core of the matter is this: Even a clear sky isn't empty. In this article, we'll walk through the basic principles of aviation and the various forces at work in any given flight.