The Cirrus G2 Vision Is the World’s Most Popular Jet for a Second Year. As broadly expected with the global pandemic, the 2,399 airplanes delivered around the world in 2020 fell short of 2019’s output of 2,658 by almost 10 percent, according to a recent report by the General Aviation Manufacturers Association (GAMA). 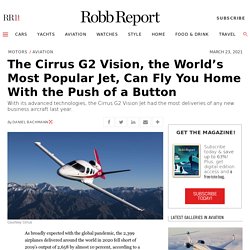 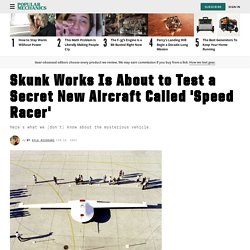 Lockheed Martin’s famous “Skunk Works” division will soon begin testing a secret new aircraft, according to Aviation Week. Lockheed designed the uncrewed vehicle, nicknamed “Speed Racer,” using an all-new digital engineering process known as StarDrive. The P-47 may not have been the sexiest American plane of World War II, but it was certainly the toughest. On the morning of June 26,1943, forty-eight P-47 Thunderbolts took off from from their base of operations in Eastern England. 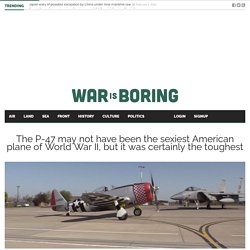 Slated to escort returning bombers heading away from occupied France, Lieutenant Robert S Johnson was doing his best to stay with the formation, being both a novice pilot and one with a tendency to do his own thing. Before arriving at the rendezvous point, the “T-bolts” were intercepted by 16 Fw 190s, striking from above with a hail of machine gun and cannon fire. Scattering to avoid being ripped up by the initial ambush, many of the Thunderbolt pilots found themselves isolated from their comrades.

Aircraft were flying in every direction, the roar of radial engines deafened by cannon fire and tracers streaking every which way. Before Johnson could even communicate with his flight, he was hit. 20mm cannon shells ripped through his plane, smashing the canopy and ripping holes through various parts of his plane. Unfortunately, it was far from over. Dassault Introduces Ultrawide-Body Falcon 6X Jet. The pegasus vertical business jet blends jet performance with helicopter convenience. Why the F-14 Tomcat Is Such a Badass Plane.

August 1981 opened with a massive show of American force in the Mediterranean Sea, just north of Libya. 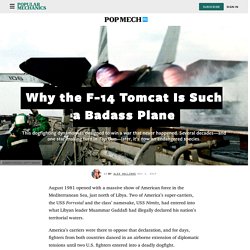 Two of America’s super-carriers, the USS Forrestal and the class’ namesake, USS Nimitz, had entered into what Libyan leader Muammar Gaddafi had illegally declared his nation’s territorial waters. America’s carriers were there to oppose that declaration, and for days, fighters from both countries danced in an airborne extension of diplomatic tensions until two U.S. fighters entered into a deadly dogfight. "The left side of the lead Libyan aircraft lit up with a big flame as the missile motor ignited," recounted Lieutenant Larry "Music" Muczynski, one of the two F-14 pilots.

That missile banked up, missing both planes and giving the American fighters all the impetus they needed to see what the Navy’s newest air superiority fighter could do. "He fired an AIM-9L off of station 1A (left glove pylon, shoulder station)," Music said of his fellow airman's first shot. HistoricalGetty Images U.S. F-22 Raptor Videos: Watch This F-22 Fly Insane Maneuvers in 4K. The U.S. 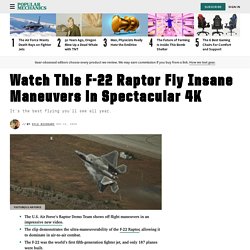 Air Force’s Raptor Demo Team shows off flight maneuvers in an impressive new video.The clip demonstrates the ultra-maneuverability of the F-22 Raptor, allowing it to dominate in air-to-air combat.The F-22 was the world’s first fifth-generation fighter jet, and only 187 planes were built. In a stunning new video, the U.S Air Force Air Combat Command’s F-22 Raptor Demonstration Team shows the fighter jet strutting its stuff in the skies over Alaska. Piloted by team pilot Maj. F-4 Phantom for Sale: Buy a Flyable McDonnell F4H-1F Phantom Jet. The F-4 Phantom was built in 1959 for the U.S. 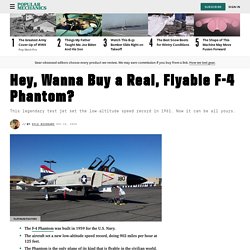 Navy.The aircraft set a new low-altitude speed record, doing 902 miles per hour at 125 feet. The Phantom is the only plane of its kind that is flyable in the civilian world. Now, you can own one for $3.25 million. Massive Soviet Ekranoplan Rises From The Caspian Sea. The Ekranoplan is one of the coolest machines designed to demonstrate the technological innovation of the Soviet Union. 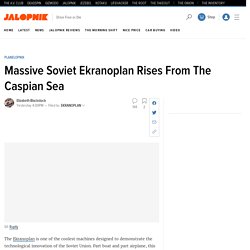 Part boat and part airplane, this massive machine kicked ass. And now an Ekranoplan is being pulled from the Caspian Sea in order to be part of a theme park attraction. Here’s a little history for those of you who need to get caught up: Ekranoplans as a general idea weren’t originally intended for military use, but in the Soviet Union, the best way to gain funding was to demonstrate a new technology’s use in battle. Aside from being able to potentially carry nuclear missiles, Ekranoplans had other benefits. Air Force Pilot Lands C-17 With Nose Gear Up. YouTube/Country Living With MD A C-17 transport plane made an emergency landing at an airfield in Afghanistan last week.In video footage, the plane lands with only the rear landing gear down.U.S. military forces in Afghanistan have confirmed the incident took place at Kandahar Airfield. 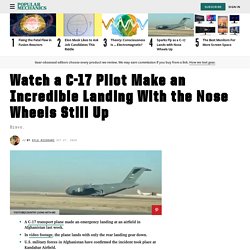 A U.S. military transport conducted an impressive emergency landing last week at an airfield in Afghanistan. The heavy lift aircraft landed with its nose gear up and tail gear down, resulting in a shower of sparks that was captured from a nearby vehicle. The incident took place on October 18 at Kandahar Airfield in southern Afghanistan. Watch Russia Fly New Fighter Jet with Top Down: Sukhoi Su-57 News. A test pilot in Russia has flown the country’s new Su-57 fighter jet without its protective canopy. 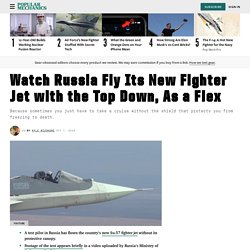 Footage of the test appears briefly in a video uploaded by Russia’s Ministry of Defense to YouTube.The test was likely to ensure there were no issues in case the canopy accidentally ... went away. Russia’s Ministry of Defense has dropped a new video that includes some very unusual flying. Airbus unveils concept for world's first zero-emission commercial aircraft. Aircraft manufacturer Airbus has revealed three concepts for zero-emission commercial aircrafts that would be powered by hydrogen and could be in service by 2035. 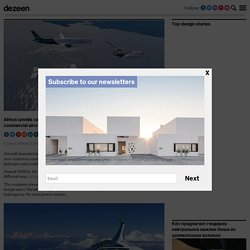 Named ZEROe, the concepts were each designed to show a different way Airbus could achieve zero-emission flights. The company revealed visuals of a turbofan design, a turboprop design and a "blended-wing body", which would all rely on hydrogen as the main power source. Airbus' created the concepts to demonstrate how the aviation industry could reduce its environmental impact. "I strongly believe that the use of hydrogen – both in synthetic fuels and as a primary power source for commercial aircraft – has the potential to significantly reduce aviation's climate impact," said Airbus CEO Guillaume Faury. Airbus is aiming to develop the aircraft and put them into production by 2035. CELERA 500L — OTTO AVIATION. Messerschmitt Me 262. World's first operational jet-powered fighter aircraft.

Watch the World's Most Advanced F-15 Execute an Amazing 'Viking Takeoff' Eric Shindelbower / Boeing A new video shows a brand new F-15 made for Qatar fly straight up immediately after its first takeoff from St. Louis's Lambert International Airport.The F-15’s two engines provide enough thrust to give it a max speed of Mach 2.5.Overseas orders like Qatar’s in many ways made the U.S.

Air Force’s new F-15, the F-15EX, possible. A video surfaced late last week of an F-15QA executing a remarkable 'Viking Takeoff.' The jet, built for Qatar, takes off like a normal fighter jet but immediately enters a steep climb, to the point where it looks like it is accelerating straight up. A Virtual Demonstration Of Why Pilots Hate Landing At The Georgetown Municipal Airport.

" (USAF photograph/released) Imagine, as a fighter pilot, being able to see your enemy without them knowing you’re even in the area. TAGC - The Aviation Geek Club. F-104C Vs MiG-19: the story of the only air-to-air shoot-down of a Starfighter during the Vietnam War - The Aviation Geek Club. Flight dynamics (fixed-wing aircraft) Flight dynamics is the science of air vehicle orientation and control in three dimensions.

The three critical flight dynamics parameters are the angles of rotation in three dimensions about the vehicle's center of gravity (cg), known as pitch, roll and yaw. Control systems adjust the orientation of a vehicle about its cg. A control system includes control surfaces which, when deflected, generate a moment (or couple from ailerons) about the cg which rotates the aircraft in pitch, roll, and yaw. For example, a pitching moment comes from a force applied at a distance forward or aft of the cg, causing the aircraft to pitch up or down. Allies’ WWII fighter engine used to make droid from “The Mandalorian”

As the year 2019 draws to a close, one cannot cruise along the internet superhighway without seeing something related to Disney’s The Mandalorian. Telling the tale of a helmet-wearing bounty hunter and the childlike creature known to the internet as “Baby Yoda,” the show has reached critical acclaim for its creativity, production values and vast characters- including one suicide-happy bounty hunter droid named IG-11. [Spoiler Warning: If you’re easily hung up by spoilers, you should probably go watch the first season before continuing] THE SCOUTING FORCE. WWII Aircraft Performance. Comparitive Performance of Fighter Aircraft. This is the first article of a series by former O.C. F4 Phantom News, Facts. Terry FincherGetty Images. Why ISIS Built These Mad Max-Style Moving Fortresses. Lessons Learned From 737 MAX Crashes.

Aviation has become dependent on technology with the net benefit of an increase in safety. But tragedy can strike when there’s a lack of communication between pilots and their sophisticated airplanes. This seems to be the case in the two Boeing 737 MAX airline crashes since December 2018, which killed 346 people. Romanian Engineers Have Created a Fully Functional Flying Saucer. So, you can Buy an old Soviet Fighter Jet or a Boeing 747 just like a Used Car on the Internet.

The Longest Flight: Watch a WWII Silver Spitfire Fly Around the World - InsideHook. These days, many of us take flying for granted. The Air Force's “Spooky” Gunships﻿ Have Flown Overseas for the Last Time. This Weird Plane Could Be the Prius of the Skies. Watch 43 Marine Corps Aircraft Take Off Together in an Elephant Walk. Why the DC-3 Is Such a Badass Plane. D-Day 75th Anniversary. Watch Four Air Force Transports Thread Through a Valley. What it takes to keep the B-2 bomber flying. Font Font Size Font Edge Font Color. How to build the ‘Mr. Potato Bomb’ for the B-2. Font. Look Inside the Cockpit of a B-2 Bomber for the First Time. Calif. firm builds a jet-powered flying motorcycle. JetPack Aviation says its aircraft could be used by emergency responders to quickly reach and transport injured people to hospitals, especially in difficult-to-reach areas. (COURTESY OF JETPACK AVIATION) Honda Jet Elite test flight, photos - Business Insider. Capt Zoe SiS Kotnik new leader of Air Force F-16 Viper Demo Team.

Gizmodo. 5 Creepiest Sounds of War Ever Recorded - Dark5. Stuka (siren sound) 12 Monster Planes That Dominate the Skies. This electric jet can take off vertically and travel almost 190 miles per hour — and it's already being prototyped. Ehang flying taxi shown lifting passengers into the air for the first time. Review: The Brand-new HondaJet Business Jet. NASA's New Plane Design Could Save Fuel and Money. A Florida Company Is Selling Soviet MiG Fighter Jets in Prime Condition. America’s Worst World War II Fighter Was the Star of the Russian Air Force. Watch This F-14 Tomcat Spin Out of Control. U.S. Airman Forced to Belly-Land A-10 Warthog After Canopy Blows, Landing Gear Fails. Economist. Why the DC-3 Is Such a Badass Plane. Watch an Airbus A400M Make a Near Vertical 'Combat Takeoff' 5 Incredible Jet Stunts That Are Barely Even Possible.

The Beast By Rico Kerste Was designed for Allegorithmic. Inverted Flight Fun. Here's an Air Force C-17 Threading a Canyon. Future - The 1950s jet launching tiny satellites. Why the F-22 Raptor Is Such a Badass Plane. Future - The Spitfires that nearly broke the sound barrier.