Top 10 Things to Know About Mesh BEFORE Having Surgery for POP or SUI – Mesh Me Not. What if I could go back in time to before I had my mesh implant for SUI? 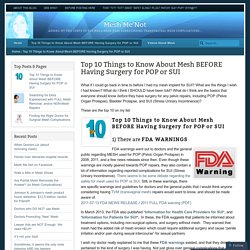 What are the things I wish I had known? What do I think I SHOULD have been told? What do I think are the basics that everyone should know before they have surgery for any pelvic repairs, including POP (Pelvic Organ Prolapse), Bladder Prolapse, and SUI (Stress Urinary Incontinence)? These are the top 10 on my list: Top 10 Things to Know About Mesh BEFORE Having Surgery for POP or SUI 1) There are FDA WARNINGS FDA warnings went out to doctors and the general public regarding MESH used for POP (Pelvic Organ Prolapse) in 2008, 2011, and a few news releases since then. In March 2013, the FDA also published “Information for Health Care Providers for SUI“, and “Information for Patients for SUI“.

I wish my doctor really explained to me that these FDA warnings existed, and that they directly pertained to the kind of surgery I was having. Right. . –3) Complications are “NOT RARE”. I feel the need to repeat this. Bags here people! Is it your Doctor’s fault if you have mesh complications? – Mesh Me Not. There is the argument that it’s not the mesh, but it is the skill of the doctor that does the surgery that determines if your mesh surgery will be successful or not. 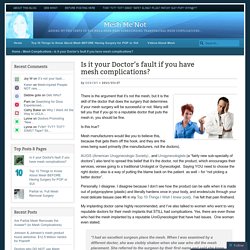 Many will tell you that if you go to a reputable doctor that puts the mesh in, you should be fine. Is this true? Mesh manufacturers would like you to believe this, because that gets them off the hook, and they are the ones being sued primarily (the manufacturers, not the doctors). AUGS (American Urogynecologic Society) , and Urogynecologists (a “fairly new sub-specialty of doctors”) also tend to spread this belief that it’s the doctor, not the product, which encourages their services, verses going to a traditional Urologist or Gynecologist.

Saying YOU need to choose the right doctor, also is a way of putting the blame back on the patient as well – for “not picking a better doctor”. Personally, I disagree. “I had an excellent surgeon place the mesh. So, the doctors blame the manufacturers. =========== Related links : AUGS – Addressing mesh complications and helping patients? or just defending mesh? Pro-mesh doctors and advocates repeatedly refer to the AUGS (American Urogynecologic Society) website, claiming AUGS is addressing the problems of mesh. 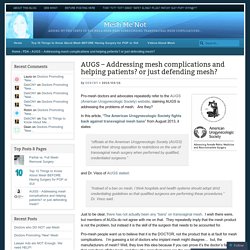 Are they? In this article, “The American Urogynecologic Society fights back against transvaginal mesh bans” from August 2013, it states: “officials at the American Urogynecologic Society (AUGS) voiced their strong opposition to restrictions on the use of transvaginal mesh surgery when performed by qualified, credentialed surgeons.” and Dr. Visco of AUGS stated: “Instead of a ban on mesh, I think hospitals and health systems should adopt strict credentialing guidelines so that qualified surgeons are performing these procedures,” Dr. Doctors Promoting “New” Mesh. I keep finding videos, and websites, where doctors are still promoting the use of mesh, for POP (Pelvic Organ Prolapse), and especially for SUI (Stress urinary incontinence) and for Hernia repairs. 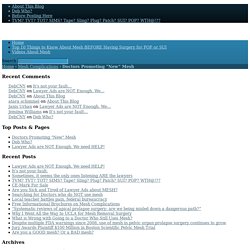 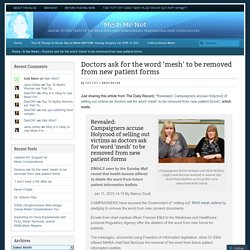 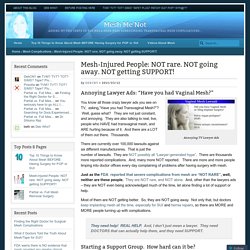 Annoying TV Lawyer Ads You know all those crazy lawyer ads you see on TV, asking,”Have you had Transvaginal Mesh?”? Well, guess what? They are not just constant, and annoying. FDA warns there is NO evidence that mesh provided any greater clinical benefit than non-mesh surgeries. I recently saw a new post on the APOPS (Association for Pelvic Organ Prolapse Support) blog titled, “POP MESH SURGERY: TIPS FOR THE BEST OUTCOME“, where Sherrie Palm continues to promote using surgical mesh for pelvic repairs, telling people that, “Without mesh, surgery often fails in one to five years because our tissues are not strong enough to hold the repair long term.” 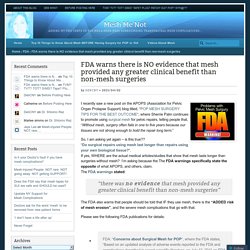 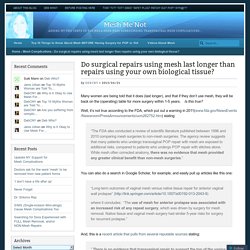 Is this true? Well, it’s not true according to the FDA, which put out a warning in 2011(www.fda.gov/NewsEvents/Newsroom/PressAnnouncements/ucm262752.htm) stating: “The FDA also conducted a review of scientific literature published between 1996 and 2010 comparing mesh surgeries to non-mesh surgeries. The agency review suggests that many patients who undergo transvaginal POP repair with mesh are exposed to additional risks, compared to patients who undergo POP repair with stitches alone.