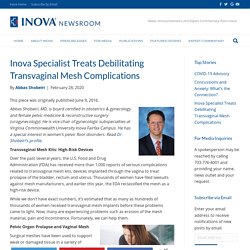 Abbas Shobeiri, MD, is board certified in obstetrics & gynecology and female pelvic medicine & reconstructive surgery (urogynecology). He is vice-chair of gynecologic subspecialties at Virginia Commonwealth University Inova Fairfax Campus. He has a special interest in women’s pelvic floor disorders. Read Dr. Shobeiri’s profile. Transvaginal Mesh Timeline - CEBM. December 7, 2017 The Mesh Story The above timeline sets out the major landmarks for transvaginal surgical mesh since its first approval in 1996 In 2014 an Oxford scientist, Carl Heneghan, joined an undercover investigation to expose how the regulation of medical devices is so lax that mesh packaging for fruit could be approved as a medical device to be implanted in people’s bodies. 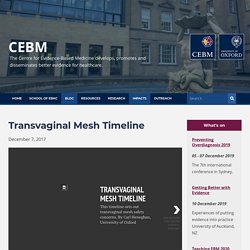 Here is what has been happening since the Scandal of fruit netting ‘approved as surgical implant’ was reported in The Times. Long-term risk of reoperation after synthetic mesh midurethral sling surgery for stress urinary incontinence. Researchers sought to determine the long-term reoperation risk following synthetic mesh midurethral sling surgery via conducting retrospective cohort study of 17,030 patients treated with primary midurethral slings for stress urinary incontinence (SUI) (2005–2016) within a large managed care organization of 4.5 million members. 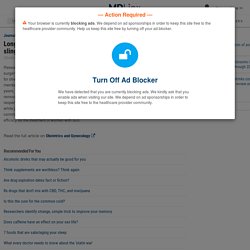 This cohort exhibited the overall reoperation rate of 2.1% (95% CI 1.9–2.4%) at 1 year, 4.5% at 5 years, and 6.0% at 9 years. Findings here indicate a low long-term risk of reoperation for mesh revision or removal, and recurrent SUI in correlation to midurethral slings. Race was identified affecting the risk of reoperation, with Asian or Pacific Islander patients having a lower reoperation rate when compared with white patients.

New Zealand white rabbit: a novel model for prolapse mesh implantation via a lumbar colpopexy. Acknowledgments We are grateful for the financial support from the Department of Defense (DOD) (grant no. 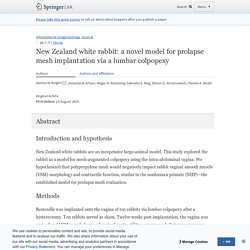 W81XWH-16-1-0133). The DOD did not provide any assistance with the study design, the collection, analysis and interpretation of data or in the writing of this report or in the decision to submit the article for publication. Research reported in this publication was also supported by the National Center for Advancing Translational Sciences of the National Institutes of Health under award no. TL1TR001858. Funding This study was funded by the Department of Defense (grant no. Mesh complications in female pelvic floor reconstructive surgery and their management: A systematic review.

NTOG 2013 6. Investigation exposes 'scandal' that has left thousands of women irreversibly harmed. An investigation by The BMJ reveals how vaginal mesh implant manufacturers "aggressively hustled" their products into widespread use, how regulators approved them "on the flimsiest of evidence" and how the medical profession failed to set up registries that might have picked up problems far sooner. 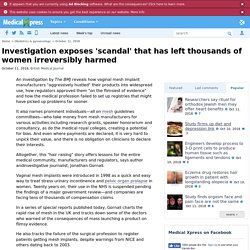 It also names prominent individuals—all on mesh guidelines committees—who take money from mesh manufacturers for various activities including research grants, speaker honorarium and consultancy, as do the medical royal colleges, creating a potential for bias. And even where payments are declared, it is very hard to unpick their value, and there is no obligation on clinicians to declare their interests. Altogether, this "hair raising" story offers lessons for the entire medical community, manufacturers and regulators, says author andinvestigative journalist, Jonathan Gornall. The UK trails far behind the US in putting the relationship between doctors and industry in plain sight, he writes. 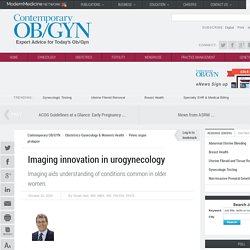 He reports receiving salary/honoraria and fees from Covidien and Boston Scientific, and performing contracted research for Cooper Surgical, Covidien, and Stryker. Empr. February 10, 2016 Lower rates of awareness of prolapse, reoperation for prolapse; higher rates of de novo incontinence HealthDay News — For women with vaginal prolapse, mesh repair is associated with mixed outcomes, according to a review published online February 9 in The Cochrane Library. 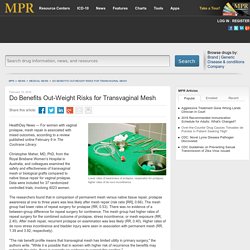 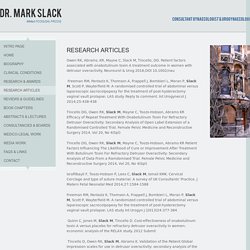 Trials of transvaginal mesh devices for pelvic organ prolapse: a systematic database review of the US FDA approval process. Women’s Pelvic Floor Surgery Innovation – ARMS Medical. First do no harm: surgical mesh. Last week, I learnt with great sadness of the death of Eileen Baxter, who died in an Edinburgh hospital in August. 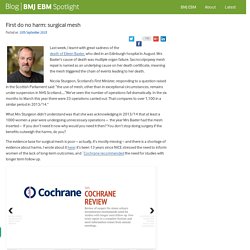 Mrs Baxter’s cause of death was multiple organ failure. Sacrocolpopexy mesh repair is named as an underlying cause on her death certificate, meaning the mesh triggered the chain of events leading to her death. Nicola Sturgeon, Scotland’s First Minister, responding to a question raised in the Scottish Parliament said: “the use of mesh, other than in exceptional circumstances, remains under suspension in NHS Scotland…..”We’ve seen the number of operations fall dramatically. In the six months to March this year there were 33 operations carried out. That compares to over 1,100 in a similar period in 2013/14.” What Mrs Sturgeon didn’t understand was that she was acknowledging in 2013/14 that at least a 1000 women a year were undergoing unnecessary operations – the year Mrs Baxter had the mesh inserted – If you don’t need it now why would you need it then? Year : Problem. Trials of transvaginal mesh devices for pelvic organ prolapse: a systematic database review of the US FDA approval process.

Should we use meshes in the management of vaginal prolapse? - PubMed - NCBI. New vaginal mesh material could help thousands of women affected by life changing complications - Latest - News. Trials of transvaginal mesh devices for pelvic organ prolapse: a systematic database review of the US FDA approval process. - PubMed - NCBI. To mesh or not to mesh: a review of pelvic organ reconstructive surgery. 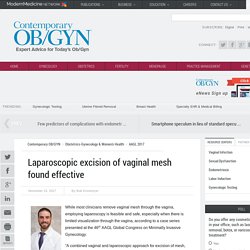 ElkattahWhile most clinicians remove vaginal mesh through the vagina, employing laparoscopy is feasible and safe, especially when there is limited visualization through the vagina, according to a case series presented at the 46th AAGL Global Congress on Minimally Invasive Gynecology. “A combined vaginal and laparoscopic approach for excision of mesh, in my opinion, is superior because you can observe the bladder, the rectum and the structures that these mesh kits are attached to more clearly than a transvaginal approach would allow,” said principal investigator Rayan Elkattah, MD, assistant professor and associate program director of the Obstetrics and Gynecology Department at the University of Illinois College of Medicine in Peoria.

To be successful, though, “one needs to identify the pelvic surgical landmarks, and particularly understand the margins of the planned dissection, and the anchor points of the mesh,” Dr. Elkattah said. What Dr. Dr. Dr. 1. 2. 3. 4. Dr. Dr. [Implants for genital prolapse : Contra mesh surgery]. - PubMed - NCBI. Sexual function in women following transvaginal mesh procedures for the treatment of pelvic organ prolapse. - PubMed - NCBI. The Disability Impact and Associated Cost per Disability in... : Female Pelvic Medicine & Reconstructive Surgery. What is the future of vaginal meshes - WeBSurg, the e-surgical reference of Laparoscopic surgery. Vaginal surgery for pelvic organ prolapse using mesh and a vaginal support device. Mesh, graft, or standard repair for prolapse surgery? - The Lancet. As reconstructive pelvic surgeons sought to reduce anatomical and symptomatic recurrence of transvaginal prolapse, the concept of incorporating an augmenting material was adopted.

Patient demographics and surgical data were retrieved from electronic medical records. Outcome measure included POP-Q exam as objective outcome and validated Pelvic Floor Distress Inventory questionnaire (PFDI) to assess subjective outcome. Editor: RK Lee, UNITED STATES Received: July 9, 2016; Accepted: April 16, 2017; Published: May 4, 2017. In Vivo Ultrasound Characteristics of Vaginal Mesh Kit Complications. Transvaginal Mesh Kits-How "Serious" Are the Complications and Are They Reversible? To mesh or not to mesh: a review of pelvic organ reconstructive surgery. Management of Mesh Complications after SUI and POP Repair: Review and Analysis of the Current Literature. Transvaginal mesh: let's not repeat the mistakes of the past - Mowat - 2017 - Australian and New Zealand Journal of Obstetrics and Gynaecology.

Over the last decade the premature introduction of transvaginal meshes for the surgical treatment of pelvic organ prolapse has had a negative impact on women who have experienced unexpected suffering and morbidity. The resulting litigation has seen the voluntary removal of most of these products from the market[1] and several international regulatory bodies, including the Food and Drug Administration (FDA),[2] the Medicines and Healthcare Products Regulatory Agency,[3] the Scientific Committee on Emerging and Newly Identified Health Risks, (a committee that advises the European Commission),[4] an Independent Scottish review committee[5] and the New Zealand Accident Compensation Corporation,[6] issuing cautions regarding use of transvaginal mesh for the management of pelvic organ prolapse.

After transvaginal mesh placement, one in ten women undergo reoperation for mesh exposure.[12] The number who undergo reoperation for, or live with, chronic pain is poorly defined. Do we need meshes in pelvic floor reconstruction? Vaginal reconstructive surgery: A case for and against mesh use. Zipper Urogynecology Associates. Mesh doesn't up cure rate for vaginal prolapse repair.

Native tissue is superior to vaginal mesh for prolapse repair, two studies report : OBG Management. Prd ctrb094968. Joint Recommendations Issued on Use of Vaginal Mesh for POP - ACOG. Washington, DC -- Due to concerns about the safety and efficacy of synthetic mesh placed vaginally for the treatment of pelvic organ prolapse (POP), its use should be reserved for high-risk women for whom the benefit may justify the risk, according to The American College of Obstetricians and Gynecologists (The College) and the American Urogynecologic Society (AUGS).

In a joint Committee Opinion issued today, the groups also say there is an urgent need for the development of a national registry to track outcomes for all current and future patients who receive vaginal mesh implants. The uterus, bladder, urethra, small intestine, rectum, and top of the vagina are held in place by the pelvic floor muscles and connective tissues. “When these muscles become torn or stretched, pelvic organs can drop down and bulge into the vagina causing pelvic organ prolapse,” said Cheryl B. Co513. Innovations in mesh kits: elevate 2010. Consider alternatives to risky transvaginal mesh. It seems like every day there is a lawsuit for some form of medical product. Pelvic Organic Prolapse Procedures With Mesh Increase, Leading to Age-based Complications. FVVinObGyn-3-VII-IX.