Diving booster. Everwind 10kw vawt wind turbine. New solar thermal tower power plant being built that requires only sun and air. Although electrical devices have evolved rapidly over the last few decades, the plants used to generate the electricity that power these devices are still dominated by the use of steam turbines that convert thermal energy, usually from the burning of fossil fuels, into mechanical energy. 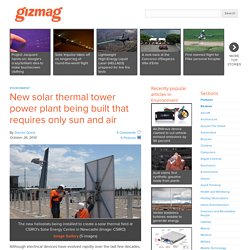 Even newer solar thermal power plants concentrate the sun’s rays to heat water into high-pressure steam to drive a turbine. But with water not always readily available in locations suited to harnessing solar energy, such as deserts, a new type of solar thermal field, tower and research facility is being built in Australia that requires only air and the sun, making it ideal for parts of the world that receive minimal rainfall. The technology, developed by Australia’s national science agency the Commonwealth Scientific and Industrial Research Organisation (CSIRO), functions in much the same way as a conventional solar power tower plant.

RideAir takes the hard work out of roadside bike tire-pumping. Ping-pong gun fires balls at supersonic speeds. The fastest serve ever recorded by a ping-pong player moved at about 70 mph (113 km/h). 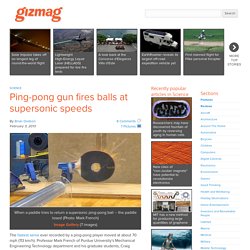 Professor Mark French of Purdue University's Mechanical Engineering Technology department and his graduate students, Craig Zehrung and Jim Stratton, have built an air gun for classroom demonstrations that fires a ping-pong ball at over Mach 1.2 (900 mph or 1,448 km/h). As the picture above shows, that's fast enough for the hollow celluloid balls to blow a hole through a standard paddle. Low-cost system uses passing vehicles to generate electricity. Over the years, various researchers have developed systems in which the weight transferred through cars' wheels onto the road – or through pedestrians' feet onto the sidewalk – is used to generate electricity. 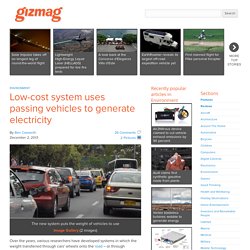 These systems utilize piezoelectric materials, which convert mechanical stress into an electrical current. Such materials may be effective, but they're also too expensive for use in many parts of the world. That's why Mexican entrepreneur Héctor Ricardo Macías Hernández created his own rather ingenious alternative. In Macías Hernández' system, small ramps made from a tough, tire-like polymer are embedded in the road, protruding 5 cm (2 in) above the surface. When cars drive over them, the ramps are temporarily pushed down. When this happens, air is forced through a bellows that's attached to the underside of the ramp. TROMPE - Powered Passive Aeration of Mine Water. Thursday December 12, 2013 (Revision of video posted Tuesday, June 18, 2013) PITTSBURGH, PA — In the 1600s, Italian engineers discovered a way to compress air using only gravity and water. 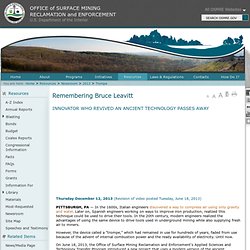 Later on, Spanish engineers working on ways to improve iron production, realized this technique could be used to drive their tools. In the 20th century, modern engineers realized the advantages of using the same device to drive tools used in underground mining while also supplying fresh air to miners. However, the device called a "trompe," which had remained in use for hundreds of years, faded from use because of the advent of internal combustion power and the ready availability of electricity. Until now. On June 18, 2013, the Office of Surface Mining Reclamation and Enforcement's Applied Sciences and Technology Transfer Program introduced a new project that uses a modern version of the ancient technology to clean up pollution from 20th-century mining. Air-powered cars unveiled at Paris auto show. No one can accuse Peugeot-Citroen of being full of hot air. 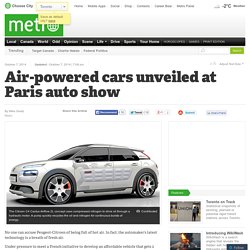 In fact, the automaker’s latest technology is a breath of fresh air. Under pressure to meet a French initiative to develop an affordable vehicle that gets 2 L/100 km fuel efficiency by 2020, the company’s engineers took a deep breath, exhaled, and then got to work on a potential hybrid system that combines a gas-powered engine with a hydraulic motor running on compressed air. The technology was officially revealed last year, but got another airing at this week’s Paris auto show, where two concept vehicles are showcasing the airy goods — the Peugeot 208 Hybrid Air 2L and the Citroen C4 Cactus Airflow 2L.

It’s no coincidence that both feature 2L in their names. As currently configured, with a plethora of fuel-saving technologies, both vehicles are said to be capable of achieving that fuel-efficient holy grail of 2 L/100 km. Here’s how it works: A storage tank holding compressed nitrogen is connected to a hydraulic motor. The Mechanical Engineering Project. TorpedoMotor - Torpedo. Torpedo. The modern torpedo is a self-propelled weapon with an explosive warhead, launched above or below the water surface, propelled underwater towards a target, and designed to detonate either on contact with its target or in proximity to it.

While the battleship had evolved primarily around engagements between armoured ships with large-caliber guns, the torpedo allowed torpedo boats and other lighter surface ships, submersibles, even ordinary fishing boats or frogmen, and later, aircraft, to destroy large armoured ships without the need of large guns, though sometimes at the risk of being hit by longer-range shellfire. Today's torpedoes can be divided into lightweight and heavyweight classes; and into straight-running, autonomous homers, and wire-guided. They can be launched from a variety of platforms. Etymology[edit] History[edit] Fridge Motor conversion to Steam Generator idea. FREE ELECTRICITY USING THE ALL AIR MOTOR! FREE ELECTRICITY - COMPRESSED AIR MOTOR TECHNOLOGY. Compressed Air Go-Kart Engine. Compressed Air V8 N1. Compressed air motor #2.