Vowel Sounds /a, ^, ae/ - Pattern - Authentic American Pronunciation. Listen & Repeat: 33 Words with “R” /ɔːr/ American English Pronunciation Practice (For ESL/EFL) Phonological change in spoken English. English pronunciation test. While most of you non-native speakers of English speak English quite well, there is always room for improvement (of course, the same could be said for every person for any subject, but that is another matter). 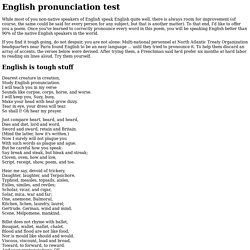 To that end, I'd like to offer you a poem. Once you've learned to correctly pronounce every word in this poem, you will be speaking English better than 90% of the native English speakers in the world. If you find it tough going, do not despair, you are not alone: Multi-national personnel at North Atlantic Treaty Organization headquarters near Paris found English to be an easy language ... until they tried to pronounce it. To help them discard an array of accents, the verses below were devised. After trying them, a Frenchman said he'd prefer six months at hard labor to reading six lines aloud. Dearest creature in creation, Study English pronunciation.

Just compare heart, beard, and heard, Dies and diet, lord and word, Sword and sward, retain and Britain. Factoids > English > pronunciation. God, who is Gawd, who is Gad. Is “God” a name? 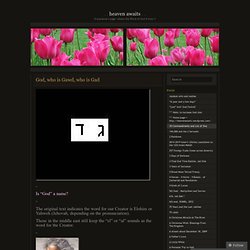 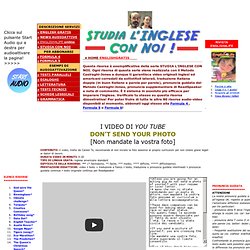 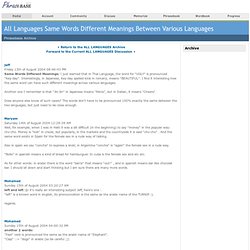 Interestingly, in Japanese, Key-day spelled kirai in romanji, means "BEAUTIFUL". I find it interesting how the same word can have such different meanings across various languages. The Chaos - Gerard Nolst Trenité. The Spelling Society. [Journal of the Simplified Spelling Society, 1994/2 pp27-30 later designated J17] Introduced by Chris Upward A number of readers have been urging republication of The Chaos, the well-known versified catalogue of English spelling irregularities. 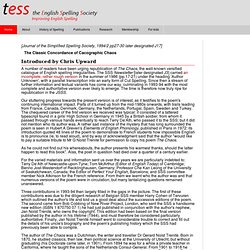 The SSS Newsletter [later designated J3] carried an incomplete, rather rough version in the summer of 1986 (pp.17-21) under the heading 'Author Unknown', with a parallel transcription into an early form of Cut Spelling. Since then a stream of further information and textual variants has come our way, culminating in 1993-94 with the most complete and authoritative version ever likely to emerge.

The time is therefore now truly ripe for republication in the JSSS. Our stuttering progress towards the present version is of interest, as it testifies to the poem's continuing international impact. As he could not find out his whereabouts, the author presents his warmest thanks, should the latter happen to read this book". Gerard Nolst Trenité. Mind! No. Attenction. Minimal Pairs /əʊ/ and /ɔ:/

Below are lists of words that vary only by one having the sound /əʊ/ and the other the sound /ɔ:/. 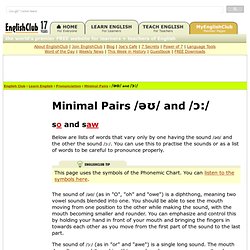 You can use this to practise the sounds or as a list of words to be careful to pronounce properly. The sound of /əʊ/ (as in "O", "oh" and "owe") is a diphthong, meaning two vowel sounds blended into one. You should be able to see the mouth moving from one position to the other while making the sound, with the mouth becoming smaller and rounder. You can emphasize and control this by holding your hand in front of your mouth and bringing the fingers in towards each other as you move from the first part of the sound to the last part. Attenction. Vowel qualities. The following is a list of the most common one-syllable words in English, grouped according to what vowels they contain. 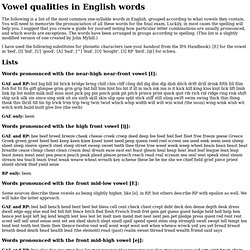 You will need to memorize the pronunciation of all these words for the final exam. Luckily, in most cases the spelling will help you. I suggest that you create a guide for yourself noting how particular letter combinations are usually pronounced, and which words are exceptions. Vowel qualities. Open Resources for English Language Teaching (ORELT) Portal. As you are aware, English words containing more than one syllable have fixed stress patterns. 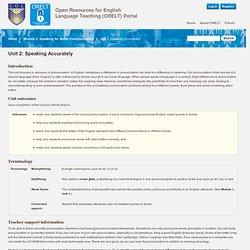 Module 1 — Better Listening contains an activity on words of two syllables that are pronounced differently when used as a noun, adjective or verb. A poem about pronunciation. The poem below is called "The Chaos" and was written by G. 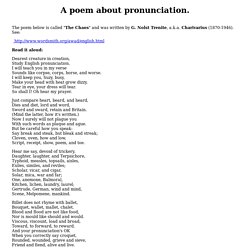 Nolst Trenite, a.k.a. Pronunciation of Latin For Dummies - MusicaSacra Church Music Forum. Practice for Vowel Contrast. This material can be used as additional phonetic exercises for practicing contrasting vowels in short words and phrases. 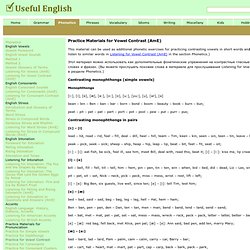