Publication (PDF): Mesh-Related SIN Syndrome. A Surreptitious Irreversible Neuralgia and Its Morphologic Background in the Etiology of Post-Herniorrhaphy Pain. Surgeons Debate Core Causes of Chronic Pain After Hernia Repair. By Christina Frangou Michael Kavic, MD, a hernia surgeon and editor-in-chief of the Journal of the Society of Laparoscopic Surgeons, is calling on practicing surgeons, surgical educators and medical device manufacturers to re-evaluate their approach to inguinal hernia repair, recommending less reliance on synthetic mesh repair as the go-to method for repairing inguinal hernias. 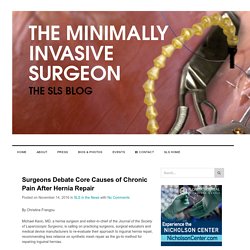 In a presentation at Minimally Invasive Surgery Week, Dr. Kavic called the incidence of chronic pain after mesh hernia repair a “potential time bomb for the surgical community and medical device suppliers. “The surgical community, as well as the industry that garners huge profits from the use of synthetic materials, must address this troubling issue,” said Dr. How The Use Of Surgical Mesh Changed Hernioplasty, Maybe Not For the Better. Some 30 years later, a new problem emerged. 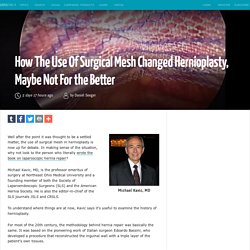 According to tracking data, anywhere from 11 to 16 percent of patients were reporting chronic, disabling abdominal pain beginning several months after the procedure. Kavic says inherent qualities of surgical mesh might be the culprit, calling attention to research conducted by Robert Bendavid, MD. “What Bendavid found out by looking at explanted mesh — removed — was that it became distorted,” Kavic says. “We knew that. Mesh-related infections after hernia repair surgery - Falagas - 2004 - Clinical Microbiology and Infection. Abstract Clinicians have been challenged in the past few years by an increasing variety of novel non-infectious and infectious complications following the widespread use of meshes after open or laparoscopic repair of hernias. 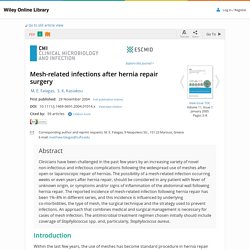 The possibility of a mesh-related infection occurring weeks or even years after hernia repair, should be considered in any patient with fever of unknown origin, or symptoms and/or signs of inflammation of the abdominal wall following hernia repair. The reported incidence of mesh-related infection following hernia repair has been 1%–8% in different series, and this incidence is influenced by underlying co-morbidities, the type of mesh, the surgical technique and the strategy used to prevent infections. 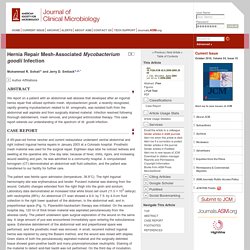 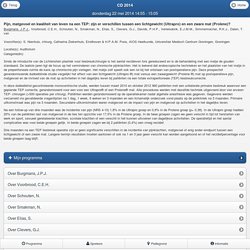 Final repair of groin involves a strip of patients own muscle. No Mesh used in his repair. All under IV sedation. Onderwater-W.-350832. PubMed Central, FIG. 1.: Surg Infect (Larchmt). 2015 Feb 1; 16(1): 45–53. doi:  10.1089/sur.2014.026. Evolution of Hernia Repair Leading the Way in Resorbable Implantable Solutions. To overcome some of the challenges with biologic grafts, while maintaining their significant advantages in the treatment of complex hernia, synthetic resorbable mesh has emerged on the market in recent years. 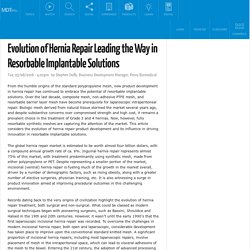 There are three companies currently offering solutions, Bard - Phasix mesh, WL Gore – BioA, and Novus Scientific - TIGR surgical mesh. Both Phasix and TIGR resemble conventional mesh, but use resorbable fibers, while BioA features a fibrous non-woven matrix. The most significant challenge for synthetic resorbable mesh, similar to biologic grafts, is to offer sufficient strength and support throughout the time it takes for tissue to integrate and heal around the implant. 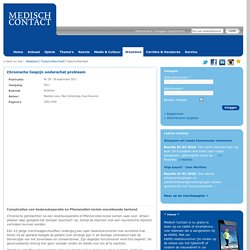 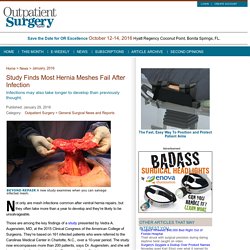 Not only are mesh infections common after ventral hernia repairs, but they often take more than a year to develop and they're likely to be unsalvageable. Those are among the key findings of a study presented by Vedra A. Augenstein, MD, at the 2015 Clinical Congress of the American College of Surgeons. They're based on 161 infected patients who were referred to the Carolinas Medical Center in Charlotte, N.C., over a 10-year period.

The study now encompasses more than 200 patients, says Dr. Effective Techniques For Preventing Incisional Hernias Revealed - General Surgery News. By Christina Frangou Chicago—Two large randomized trials from the Netherlands have demonstrated that surgeons can substantially reduce a patient’s risk for developing an incisional hernia after a midline laparotomy by using either a mesh-layered reinforcement or a “small bites” suture technique to close. 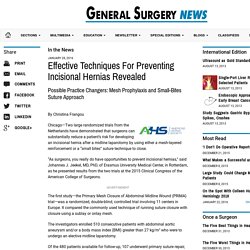 “As surgeons, you really do have opportunities to prevent incisional hernias,” said Johannes J. Jeekel, MD, PhD, of Erasmus University Medical Center, in Rotterdam, as he presented results from the two trials at the 2015 Clinical Congress of the American College of Surgeons. The first study—the Primary Mesh Closure of Abdominal Midline Wound (PRIMA) trial—was a randomized, double-blind, controlled trial involving 11 centers in Europe. It compared the commonly used technique of running suture closure with closure using a sublay or onlay mesh. Insightra Medical Announces FDA Clearance of The Freedom Octomesh Ventral Hernia System. (PRWEB) May 28, 2015 Insightra Medical, Inc., a leader in the field of fixation-free hernia repair, announced that FDA cleared its ventral hernia system for use in the United States. 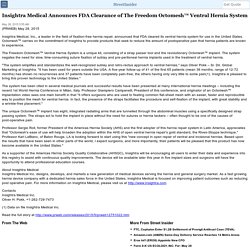 Octomesh™ carries on the commitment of Insightra to provide products that seek to reduce the amount of postoperative pain that hernia patients are known to experience. The Freedom Octomesh™ Ventral Hernia System is a unique kit, consisting of a strap passer tool and the revolutionary Octomesh™ implant. The system negates the need for slow, time-consuming suture fixation of sublay and pre-peritoneal hernia implants used in the treatment of ventral hernia.

"The system simplifies and standardizes the well-recognized sublay and retro-rectus approach to ventral hernias," says Oliver Pokk – Sr. PaperDownload. Surgery field growing due to continuous reinvention process. Frontiers Science Hero: Ferdinand Köckerling from Frontiers on Vimeo. Prof. Ferdinand Köckerling has been from very early onwards in his medical studies captivated by surgery. “It is a combination of intellectual and handicraft capabilities, and you can see the immediate success of what you are doing. That fascinated me very early in my career and that is when I decided to become a surgeon,” he said. Prof. Technological innovations in surgery One of the highlights of Köckerling’s clinical career was his involvement in the development of minimally invasive surgery. Because of these new procedures and innovations, the field is growing quickly.

In order to keep up with these changes and innovations, scientists (including surgeons) attend conferences, require good instructors and regular courses, but they also need professional medical journals to allow scientists to publish their new ideas. Köckerling says research is not something that can be done by a single person. Global Hernia Repair Devices Market to Grow at 6.4% CAGR during 2013-2019. A new market report published by Transparency Market Research is Hernia Repair Devices Market (Polymer and Prosthetic Mesh, Biologic Materials, Surgical Instruments and Endoscopy Equipments) - Global Industry Analysis, Size, Share, Growth, Trends and Forecast, 2013 - 2019 Posted via Industry Today. Follow us on Twitter @IndustryToday The global hernia repair devices market was worth US$3,578.21 million in 2012 and, due to the rising number of hernia repair surgeries, the overall market is expected to grow at a CAGR of 6.4% between 2013 and 2019.

General Surgery News Mobile. Progress in synthetic materials for abdominal wall repair. Less Complex Inguinal Hernia Surgery Without Mesh Getting Popular. Hernias are abnormal bulges developed by a weakness or hole in the abdominal wall tissue called fascia. Inguinal hernia is one of the most common types of hernia and they represent approximately two-thirds of adult hernias. It can affect anyone from their childhood to old age but it is much more common in men than in women.

Around 2 million inguinal hernia cases are reported every year in India. Numerous repair methods have been introduced for inguinal hernia in the country, but mesh repairs such as laparoscopic procedures are also used widely. In the laparoscopic procedure, anesthesia is usually given, and a small incision is made in or just below the navel. International Hernia Mesh Registry - Full Text View - ClinicalTrials.gov.