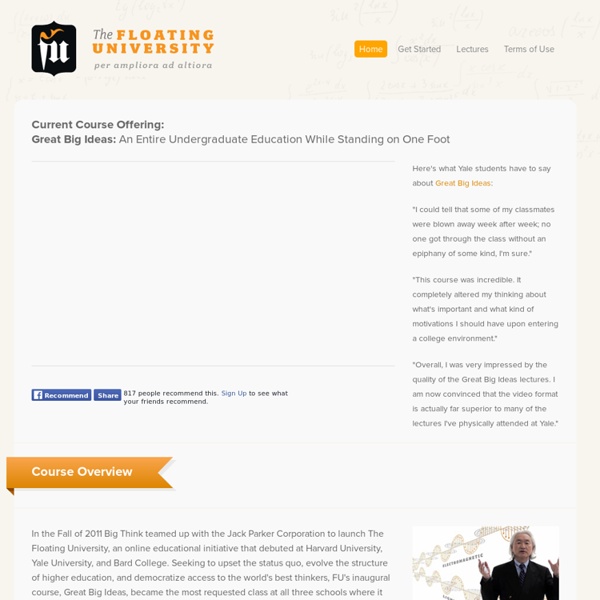 In the Fall of 2011 Big Think teamed up with the Jack Parker Corporation to launch The Floating University, an online educational initiative that debuted at Harvard University, Yale University, and Bard College. Seeking to upset the status quo, evolve the structure of higher education, and democratize access to the world's best thinkers, FU's inaugural course, Great Big Ideas, became the most requested class at all three schools where it was offered. FU spearheaded the movement toward open-access higher education, with a focus on professional production values, ease-of-use, top academic talent, and online collaboration between individual learners and participating institutions. Since that time we've seen Harvard, MIT, Stanford, and many more of our best universities take the leap forward, and now, one year after our beta launch, we're pleased to present portions of the Great Big Ideas course offering to all comers.

Information Philosopher - Introduction Introduction The Information Philosopher has established that quantum mechanics and thermodynamics play a central role in the creation of all things. This finding has enormous implications for philosophy and metaphysics. Instead of a closed universe that is winding down deterministically from an initial state of high information, we find the universe is open and increasing information indeterministically from an initial state of relatively high entropy and low information. Information is being continuously created in the universe, not least by human beings who are just learning that they are part of the cosmic creative process.

Quickly Improve Your Handwriting with These Fantastic Resources If you’ve always wanted to improve your handwriting but never got around to it, here’s your chance. If you’re a firm believer in graphology — the study of handwriting and its relation to character traits — you may believe that your handwriting is as fixed as your character. But you’d be wrong.

Lectures: Pinker Linguistics as a Window to Understanding the Brain. STEVEN PINKER, Psychologist, Cognitive Scientist, Linguist, Johnstone Family Professor, HC Professor, Harvard University Lesson Overview Diagramming sentences in junior high is a tedious process, so at first glance studying the particulars of language in-depth might not seem so exciting. But in "Say What?

One Teacher's Quest To Build Language Skills ... And Self-Confidence : NPR Ed Bridging Gaps Between ESL And Native Speakers Thomas Whaley teaches second grade at Canaan Elementary in Patchogue, N.Y. Several students in his class are ESL students. Christopher Gregory for NPR Whaley collects library cards from students. Before he was a second-grade teacher, he worked at a public relations firm in New York City. Christopher Gregory for NPR Whaley and his class recite the Pledge of Allegiance. Facts about Ecstasy MDMA (3,4-methylenedioxymethamphetamine), commonly referred to as ecstasy or molly, is a drug that is sold either as a pressed pill taken orally, or as a powder that is snorted or swallowed. MDMA’s effects resemble those of both stimulants and psychedelics. A typical dose of 100 to 125 mg lasts four to six hours. People who use MDMA describe themselves as feeling open, accepting, unafraid and connected to people around them.

Read These Books Instead of Getting an MBA I don’t blame people for wanting to get an MBA. It’s not their fault they’ve been duped into believing it’s the best way to further their career in business. But, as we all know, (and Goldman Sachs agrees) spending over $100,000 for a useless education — and putting yourself in debt for the next 10 years — is the wrong move for 95% of people. So how are you supposed to learn what you need to get ahead? Books.