The Careless Language Of Sexual Violence 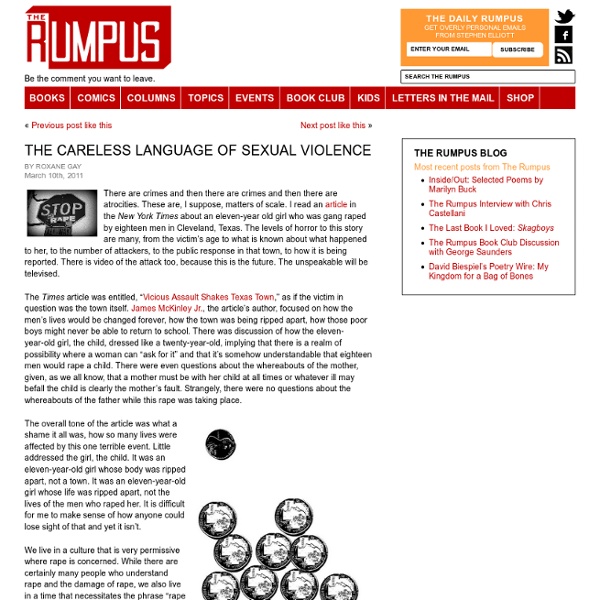 There are crimes and then there are crimes and then there are atrocities. These are, I suppose, matters of scale. I read an article in the New York Times about an eleven-year old girl who was gang raped by eighteen men in Cleveland, Texas. The levels of horror to this story are many, from the victim’s age to what is known about what happened to her, to the number of attackers, to the public response in that town, to how it is being reported. There is video of the attack too, because this is the future. The Times article was entitled, “Vicious Assault Shakes Texas Town,” as if the victim in question was the town itself. The overall tone of the article was what a shame it all was, how so many lives were affected by this one terrible event. We live in a culture that is very permissive where rape is concerned. The casual way in which we deal with rape may begin and end with television and movies where we are inundated with images of sexual and domestic violence. Related:  Culture du viol • A Room of Her Own...

Roxane Gay is Spelled With One "N" : What Empathy Is tim | Impostor Syndrome: Part 1 of 4 This is the first post in a 4-part series about impostor syndrome. I'll be posting one installment per day. "Compare the best of their days With the worst of your days You won't win..." -- Morrissey I can't remember exactly when I first encountered the term "impostor syndrome", but I know I was less than ten years old at the time, and I know where I read about it: a book called The Gifted Kid's Survival Guide. This essay is about my experiences with impostor syndrome. Ideally, I would like to change how historically male-dominated institutions -- specifically in this essay, computer science graduate programs -- try to integrate and welcome women as full participants. Beginnings I didn't go to elementary school, middle school, or high school. That same year -- 1995 -- I started taking classes at U/Mass Boston, and I got access to the Internet. This was, by the way, not that long after I had decided that math and science were tools of the Man and definitely not me. College To be continued!

Steubenville teens are found guilty but rape culture remains alive and well *Trigger warning* Yesterday, the verdict was handed down in the Steubenville rape case. The defendants, Trent Mays and Ma’lik Richmond, were found guilty. I feel great relief that I’m not writing about a “not guilt” verdict today. But it’s hard to hold on to that sense of relief–to realize that this ending was the best one possible in this particular case–when the problem is so much bigger. I don’t want to live in a world in which a mainstream media outlet reporting on the verdict barely mentions the victim in their rush to lament the fact that the “promising lives” of the defendants have been ruined and that this “will haunt them for the rest of their lives.” I don’t want to live in a world in which girls are so well-schooled in the consequences they’re sure to face for speaking up about a sexual assault that the victim immediately tried to assure people that she “wasn’t being a slut” and initially didn’t want to name the defendants ”because I knew everyone would just blame me.”

#280: “How do I get rid of my Facebook stalker without being mean about it?” The “H” in Jesus H. Christ stands for Hulk. QUIT FUCKING STALKING PEOPLE WHO DON’T WANT TO TALK TO YOU. Aw fuck, people. Dear Captain Awkward, For a few months now, I have what would be defined as a “Facebook stalker” – he likes all of my pictures, all of my statuses, all of my photos, all of my comments on other people’s statuses… you get the idea, and it increases with each day. Not only is it infuriating, it’s also creeping me out – it’s reached the point where he likes or comments on something within seconds of my posting it. He’s not a particularly close friend, – in fact, I don’t really know him that well at all – but he’s someone I’ve spent time with in group outings, and all in all, he’s kind of fun to be around – however, in the viral world, he’s not so much fun. Cap’n, what do I do? xo Socially Confused Astronaut Dear Socially Confused: The guy is making you uncomfortable because he is badgering you and territorially pissing in all the corners of your life. *P.S. Like this:

Steubenville and the misplaced sympathy for Jane Doe's rapists | Megan Carpentier The victim in the Steubenville rape case, known in most (but not all) of the media coverage of the case as "Jane Doe", was taught by her rapists, her then-friends and much of her hometown that she doesn't matter. She didn't matter to the boys who made use of her unconscious body to satisfy their own sexual urges and desire for power; she didn't matter to her friends who sided with those boys; and she didn't matter to the football boosters in her hometown, who were unwilling to see their pride in the team tarnished by the actions of two of its players. She learned that a lot of people around her, including some in positions of power, thought that the futures of her rapists were more important than what they'd done to her and what she'd have to learn to live with. It wasn't enough that ABC aired a rosy profile of one of the now-convicted rapists before the trial, emphasizing his happy mood the night of the rape and his football career.

Responses to the Steubenville Verdict Reveal Rape Culture Yesterday two juvenile men were convicted of rape, one was convicted of distributing a nude photo of a minor (NPR). The response by a segment of society reflects rape culture: ”an environment in which rape is prevalent and in which sexual violence against women is normalized and excused in the media and popular culture” (source). Below are a series of concrete examples. Trigger warning for rape apologists and victim blaming. CNN coverage of the verdict spends six minutes on how sad the conviction is for the rapists: It was incredibly emotional… to watch what happened as these two young men that had such promising futures, star football players, very good students, literally watched as, as they believed their life fell apart. MsCongeniality: A selection of tweets collected by Public Shaming: A selection of tweets collected by Mommyish: A selection of tweets collected by Persephone Magazine: Tweets collected by The Inquisitr: Ms. Great coverage from around the web:

TRK - Lighten Up 21 March 2012 Recently, I was asked why a woman that loves coding would ever leave the field. It's true: at one point in my life, I decided that coding would be something I'd do only in private. Let me tell you, I love coding. In short, I got tired of being told to 'lighten up.' This industry is one of subtle sexism. Lighten up. The barbs aren't always jokes, either. Why did I have to take all of the above so personally? Sometimes, even the unsubtle jabs are hard to combat. What is wrong with you? Every time I spoke up about the above crap, I got some sympathy, but I also got some guy who didn't understand what the big deal was. How long would you put up with it? Or would you tell them to lighten up? You, person who told me to lighten up, saw one little thing. That's the main problem with subtle discrimination. I would just like the million little barbs to stop, and I would like to not be told to 'lighten up'. (Update - Have to close comments!