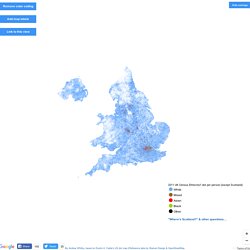 " WTF is Brexit? - Foil Arms and Hog. It’s time to question our notions of Britishness and patriotism. “Patriotism is the last refuge of a scoundrel.” 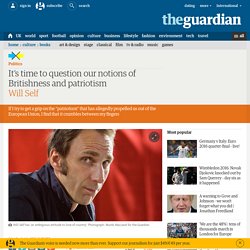 So, according to his tireless amanuensis James Boswell, said Dr Samuel Johnson on the night of 7 April 1775. We don’t know which particular scoundrel provoked the comment, only that it came in the course of a general discussion of the virtues of patriotism. That Johnson considered patriotism to be estimable we can have little doubt − in the fourth edition of his celebrated Dictionary, published two years previously, he defines a patriot as: “One whose ruling passion is the love of his country.”

Although, he also adds: “It is sometimes used for a factitious disturber of the government.” The Commonality of Strangers - Mahtab Hussain. “I’m from Romania, Bucharest and have been in this country for four years. 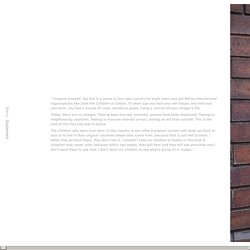 I like this country and the people; it’s a very nice country. There’s no racism. My country, too much racism. ‘You Gypsy!’ , racism bad in Bucharest, lots of fighting, people killed. The Romanian government is racist – is big mafia. England is nice. And the government is very good government here, very clever. This is my country. How the United Kingdom voted on Thursday... and why. By Lord Ashcroft The UK has voted to leave the European Union. 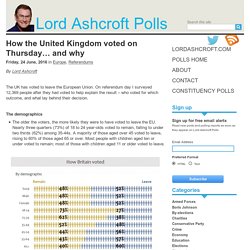 On referendum day I surveyed 12,369 people after they had voted to help explain the result – who voted for which outcome, and what lay behind their decision. 1981: Brixton riots report blames racial tension. 1981: Brixton riots report blames racial tension Last April's riots in Brixton, south London were caused by serious social and economic problems affecting Britain's inner cities, a report has said. 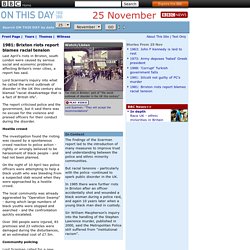 Lord Scarman's inquiry into what he called the worst outbreak of disorder in the UK this century also blamed "racial disadvantage that is a fact of British life". The report criticised police and the government, but it said there was no excuse for the violence and praised officers for their conduct during the disorder. Mail on Sunday backs remain as major papers declare sides in EU referendum. The Mail On Sunday has come out in favour of the remain case in the EU referendum campaign, warning it is “not the time to risk the peace and prosperity” of the UK. 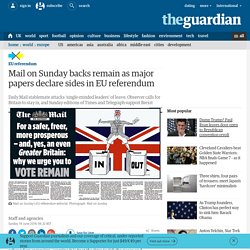 In a two-page editorial, the paper said that “by any calculation” Britain would be bound to face higher tariffs, turmoil in the financial markets and a period of uncertainty if there was a vote to leave on 23 June. History - British History in depth: Multi-racial Britain. The Vision of a Nation: Making Multiculturalism on British Television. Lecturers are striking against low-paid, casual work, which hurts students too. Today and tomorrow thousands of academic staff will walk out of UK universities over pay and conditions. 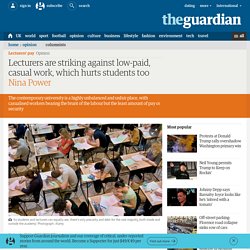 The failure of Kids Company is another nail in the coffin for the Big Society. The truth about the people and numbers in loud and furious migration debate. ‘You have got a swarm of people coming across the Mediterranean seeking a better life, wanting to come to Britain because Britain has got jobs,” David Cameron said last week. 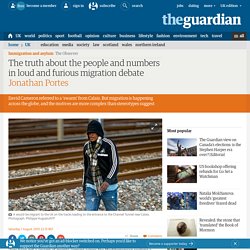 Leaving the language aside, there is some truth in this. But it also misses out a lot. This is not a British problem. It is a European problem and a North African one and a Middle Eastern one. Tony Blair could face trial over 'illegal' Iraq war, says Jeremy Corbyn. Tony Blair should stand trial on charges of war crimes if the evidence suggests he broke international law over the “illegal” Iraq war in 2003, the Labour leadership frontrunner Jeremy Corbyn has said. 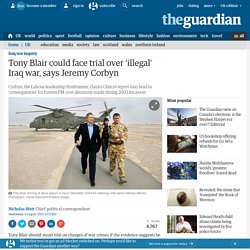 Corbyn called on the former prime minister to “confess” the understandings he reached with George W Bush in the run up to the invasion. Asked on BBC Newsnight whether Blair should stand trial on war crimes charges, Corbyn said: “If he has committed a war crime, yes. Everybody who has committed a war crime should be.” Reply to Owen Jones on the EU. Dear Owen, Despite your relative youth, you are (to judge by your piece in today’s Guardian) representative of an old UK left — and the left in a few other European countries, such as Denmark — who have for decades been anti-EU but in recent years have kept fairly quite about it for fear of seeming to ally with Ukip and the Tory right. 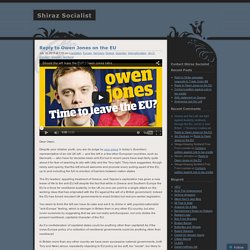 They have suggested, though rarely said openly, that the left should welcome and promote every pulling-apart of the EU, up to and including the full re-erection of barriers between nation-states. Biggest crackdown on trade unions for 30 years launched by Conservatives. The biggest crackdown on trade union rights for 30 years will be unveiled on Wednesday, including new plans to criminalise picketing, permit employers to hire strike-breaking agency staff and choke off the flow of union funds to the Labour party. The scale of the reforms goes far wider than the previously trailed plan for strikes to be made unlawful unless 50% of those being asked to strike vote in the ballot. In a set of proposals on a par with those introduced by Norman Tebbit in 1985, Sajid Javid, the business secretary, is also to require that at least 40% of those asked to vote support the strike in most key public services.

In the case of 100 teachers asked to strike, the action would only be lawful if at least 50 teachers voted and 40 of them backed the strike. The double threshold would have to be met in any strike called in health, education, fire, transport, border security and energy sectors – including the Border Force and nuclear decommissioning. The history of British slave ownership has been buried: now its scale can be revealed. The past has a disconcerting habit of bursting, uninvited and unwelcome, into the present. This year history gate-crashed modern America in the form of a 150-year-old document: a few sheets of paper that compelled Hollywood actor Ben Affleck to issue a public apology and forced the highly regarded US public service broadcaster PBS to launch an internal investigation. The document, which emerged during the production of Finding Your Roots, a celebrity genealogy show, is neither unique nor unusual. It is one of thousands that record the primal wound of the American republic – slavery.

It lists the names of 24 slaves, men and women, who in 1858 were owned by Benjamin L Cole, Affleck’s great-great-great-grandfather. When this uncomfortable fact came to light, Affleck asked the show’s producers to conceal his family’s links to slavery. The myth of British Euroskepticism. Everyone agrees that the United Kingdom is one of the knottier problems on Europe’s list. From a quick scan of the press, you can glean that French government sources are “tired” of David Cameron, that this or that German intellectual thinks the UK should leave, that nobody knows what the prime minister intends to ask for in his touted renegotiation of the EU treaties.

Nigel Farage, the leader of the UK Independence Party, dramatizes this consensus every day. Euroskepticism is popular! It seems to define populism for both the British political class and, weirdly, for the European Union itself. Why don't young people want to be part of a tribe any more? I caught the tail end of punk, when the Pistols were already disbanded, and less revolutionary but still decent bands like the Stranglers, The Fall and Pete Shelley’s Buzzcocks were spitting and being spat on, and shouting out against boredom and bad pop music. At the time, my small village in Lancashire was also home to slightly older greasers (or smellies), rather impoverished New Romantics, a few Northern Soulers, some Two-toners, a tiny band of latterday hippies in Afghan coats, some electronic music fans, and a couple of narcissistic Roxy Music idolaters. • Being a skinhead was about sharing a sense of style When I hit 16, I swapped my drainpipes and oversized Beetlecrushers for an Oxfam mac and eyeliner and went (sort of) goth for a while.

Fashion – or at least clothes – underpinned music, and from that seedbed I grew into a fan of Bowie, Scott Walker, Brel, Velvet Underground, Patti Smith. What else? Brexit – what would happen if Britain left the EU? David Cameron’s electoral triumph has brought the prospect of a British withdrawal from the EU one step closer. The prime minister has vowed to reshape Britain’s ties with Europe before putting EU membership to a vote by 2017. Election 2015 - BBC News. Chavs author Owen Jones returns to Stockport - video. English nationalism is out of the bottle, whoever wins. Zero-hours contracts.

Official figures failing to show full extent of homelessness in England, says report. Official homelessness figures are failing to show the “true scale of the problem”, according to a new report published on Wednesday, which also attempts to highlight the number of ‘hidden homeless’ in England. Scotland poll shows a nation on the verge of abandoning Labour. Still the Enemy Within review – a documentary as gripping as a thriller. Owen Gower’s documentary about the striking miners of 1984 and 85 is as gripping as any thriller. It's socialism for the rich and capitalism for the rest of us in Britain. L'Angleterre dans le piège du communautarisme scolaire. Last 'Pitman painter' Norman Cornish dies aged 94.

2 August 2014Last updated at 14:46 ET. Poor doors: the segregation of London's inner-city flat dwellers. Multimillion pound housing developments in London are segregating less well-off tenants from wealthy homebuyers by forcing them to use separate entrances. A Guardian investigation has discovered a growing trend in the capital's upmarket apartment blocks – which are required to include affordable homes in order to win planning permission – for the poorer residents to be forced to use alternative access, a phenomenon being dubbed "poor doors". Even bicycle storage spaces, rubbish disposal facilities and postal deliveries are being separated. Dear Mr Gove: what's so 'British' about your 'British values'? I see you're going to require all your schools to teach British values. If you think you're going to have the support of all parents in this project, you'll have to count me out.

Why doesn't Britain make things any more? Before moving to Yale and becoming a bestselling historian, Paul Kennedy grew up on Tyneside in the 50s and 60s. "A world of great noise and much dirt," is how he remembers it, where the chief industry was building ships and his father and uncles were boilermakers in Wallsend. Last year the academic gave a lecture that reminisced a little about those days. Sasha Lilley, "On Neoliberalism: An Interview with David Harvey" UKIP, la marche triomphale des anti-européens britanniques - Page 1. Irlande du Nord : une longue marche vers la normalité.