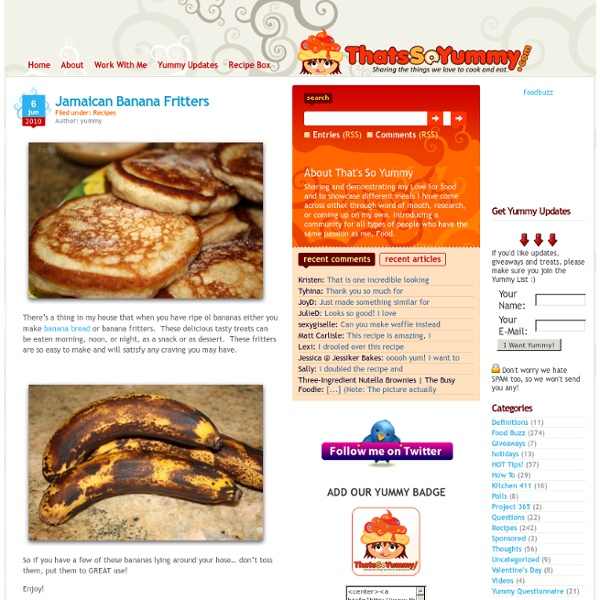 There’s a thing in my house that when you have ripe ol bananas either you make banana bread or banana fritters. These delicious tasty treats can be eaten morning, noon, or night, as a snack or as dessert. These fritters are so easy to make and will satisfy any craving you may have. So if you have a few of these bananas lying around your hose… don’t toss them, put them to GREAT use! Enjoy! Peel and mash the ripe bananas. Beat egg, sugar, vanilla, cinnamon, and nutmeg. Next, blend egg mixture with mashed bananas. Make sure it is all incorporated. Then sift flour and baking powder into the banana/egg mixture. Mix it all together. If the batter seems to be too thick add a little milk… I added about 1/4 cup to 1/2 cup of milk. Add oil to a frying pan and place on medium high heat. Drop spoonfuls of the banana fritter batter into the hot oiled frying pan. Flip when you see the edges starting to get brown and golden. Lastly, combine cinnamon and sugar together to create your cinnamon sugar. Ingredients

How to Make Pizza Without Dough I was getting kind of sick of ordering delivery pizza (this happens at least 2-3 times a month). It was time to put a spin on gourmet pizza, but I just didn't know what it would be. Without pizza dough or an oven that is capable of creating the perfect pizza crust (I don't have an oven that can go up to a 1000 degrees), I decided I would use potatoes instead. How To Cook Like Your Grandmother I’ve tried lots of brownie recipes: Boxes, scratch, frosted, plain, nuts, chips, fudge … Each of them has something to like, but depending on my mood I might want a change of pace. Not any more. My wife found this recipe, and it’s perfect. I’m done looking.

Steak With Drunken Mushrooms & Roasted Blue Cheese Potatoes Steak With Drunken Mushrooms, Caramelized Onions & Roasted Blue Cheese Potatoes Serves 2 20 fingerling potatoes, washed and halvedSalt and freshly ground pepperOlive oil2 ounces blue cheese, crumbled2 red or sweet yellow onions, peeled and sliced12 to 15 large button mushrooms, sliced2 cloves garlic, minced12 ounces dark beer, your favorite or what you have on hand2 thick steaks Toss the potatoes with salt and olive oil, and spread on a baking sheet or metal pan. Roast in a 425°F oven for 20 to 30 minutes. Place onion, a pinch of salt, and a dash of oil in a medium-sized sauté pan over medium-high heat.

Brazilian Lemonade This is my most favorite drink. Ever. Maybe I’d feel differently if I drank (as in alcohol), but there is nothing I love more than a warm, breezy afternoon and a pitcher of Brazilian lemonade. Chocolate Brownie Cookies & Namely Marly If you’re looking for a sweet treat these Chocolate Brownie Cookies might just be the ticket. Some days you wake up realizing you’re stuck in a rut. You don’t really know what got you there, except for the perpetual motion in the same direction. (That’s sort of the definition of a rut.) But then some days something will come along to shake your tires plum out of their tracks. 22 Ways To Get Your Vegan Snack Attack On It must be snacking season because I’ve had a lot of emails lately asking for some healthy vegan snack ideas and I thought it was a great idea for a post. Many of the recipes below are also some of the most popular snack recipes of 2011, so I will also add this post to my Top Recipes of 2011 page for easy reference. Ready to get your vegan snack attack on? 1. Endurance Crackers My all-time favourite cracker and quite possibly one of the top 3 recipes so far in 2012.

Imp Head Color 1 - StumbleUpon Ten Stone Tea was a bit of an adventure for me. I had been feeling artistically weighed down with a seemingly endless parade of freelance jobs not to mention my full time, nine to five job. After I finally got a little bit of time for myself I decided that to keep myself fresh and to recharge my batteries I would do a painting just for me. Coconut Mango Oat Muffins Recipes from The Kitchn Mornings are meant for muffins. They're portable, easy to throw together, and can incorporate the season's fruit beautifully. Such is the case with these vanilla-flecked, oat and coconut-strewn, mango-laden beauties. I love these muffins for many reasons. First, you can mix them by hand and there will be very few dishes (always a good thing). Second, they rely on my most favorite fat for cooking and baking: coconut oil.