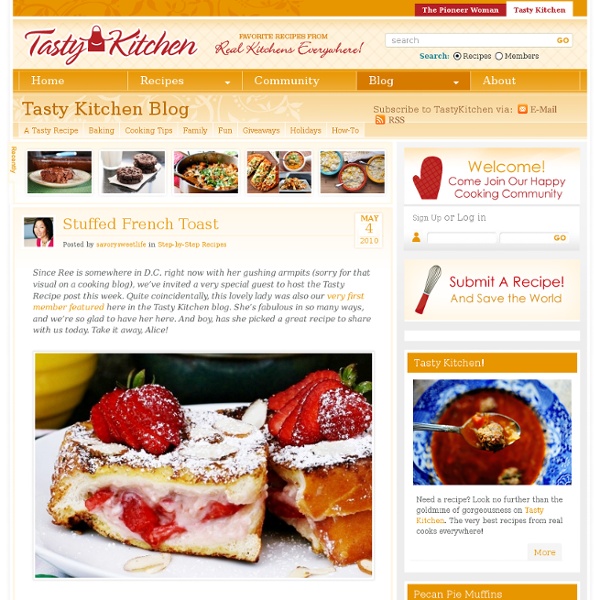 Since Ree is somewhere in D.C. right now with her gushing armpits (sorry for that visual on a cooking blog), we’ve invited a very special guest to host the Tasty Recipe post this week. Quite coincidentally, this lovely lady was also our very first member featured here in the Tasty Kitchen blog. She’s fabulous in so many ways, and we’re so glad to have her here. And boy, has she picked a great recipe to share with us today. Take it away, Alice! French toast is one of my most favorite foods to eat any time of the day. Here’s a list of everything you need: a loaf of French or Italian bread, eggs, milk, butter, cream cheese, cinnamon, and jam or fresh fruit (if you’re like me, you’ll use both). Before you can invite me over for breakfast, you’ll need to know how to make this. I decided to go with strawberries for the filling. Wash the strawberries, remove the stems, and cut slices in each one. Next, macerate the strawberries, which is fancy way of saying add a little sugar and mix it in.

Summer Recipe: No-Bake Strawberry Icebox Cake See this? This is such an easy dessert. It looks a little fancy, doesn't it? Don't be put off. It only takes a few ingredients, and it doesn't even involve turning on the oven. Cinnamon Bun Pancakes When two people tell you that these are the best pancakes they have ever eaten, then you know that they are good. These pancakes are exactly what you want when you are craving a cinnamon bun but do not have the time to make them. These are sweet, cinnamony and fluffy. To make something delicious over the top, instead of maple syrup (which is also delicious), top them with cinnamon bun icing. Nothing short of amazing. This recipe is indeed a treat, but it is also a great recipe to try experimenting with whole wheat flours.

Big Red Kitchen: Little Peach Cakes More Food Crafts:Chocolate Covered Strawberry Mallow CandiesRainbow Cupcakes with Rainbow FrostingCandy Cake The title of this post sounds like a term of endearment someone may bestow on a cute little child, but no, the photo is a shot of my Little Peach Cakes made this morning for when my niece and nephew come over to play. My own children were amazed at how real these little cakes appeared. They were almost too cute to cut into and eat but everyone loves a fresh peach right? I had spotted these in a magazine years and years ago (maybe Southern Living?) and just today thought to make them.

Peanut Butter- S’Mores Turnovers Peanut Butter- S’Mores Turnovers I’m not much of a camper. My husband often takes my son on camping trips, and I happily stay behind and thank the gods for our bug-free house, cozy bed and well-stocked kitchen. I always send them off in comfort… marinate a little meat for them to throw on the grill, pack up some convenience foods and bake a few goodies too. Cookie Decorating Tutorial – General Tips &amp; Butterfly Cookies This is my first tutorial on tips and tricks for decorating cookies with royal icing. I have to say first off, that I’ve learned many great tips from various sources on the internet, from books and from cookie decorating classes. If you’re interested in other sources here are the main ones I’ve learned from: 1. Internet:

Scrumptious Photography I was very excited this week because the TWD recipe, chosen by Di of Di's Kitchen Notebook, called for raisins flamed in rum. I figured that there would be some huge fireball in my kitchen, curling and rising and almost singeing the ceiling. As it turns out, the flame was tiny and blue and you couldn't see it unless you were looking straight down into the pan. Still kinda cool, but not nearly as dramatic as I'd imagined ;) Anyway, the rest of the recipe was pretty straightforward. I thought the cinnamon was a nice addition and gave the chocolate a little something to play against.

General Tso’s Chicken Recipe At nearly any buffet or take-out place you can find General Tso’s Chicken. General Tso’s Chicken is a perfect combination of sweet and spicy flavors. It is a very popular dish throughout the United States and Canada. This is probably one of the best and easiest recipes around, you will be surprised at how little time it takes to prepare. I decided to get brave and use the boneless skinless chicken thighs, and I wasn’t disappointed. Baked Eggs in Bread Bowls This was our breakfast Sunday morning. Aren’t they cute? They were very, very good. It’s the whole egg and the toast combo all together in one nice package. These are so easy to make and wouldn’t they be splendid on a brunch buffet table? The best part, you can easily make two, ten, a hundred, whatever your needs are at the moment.