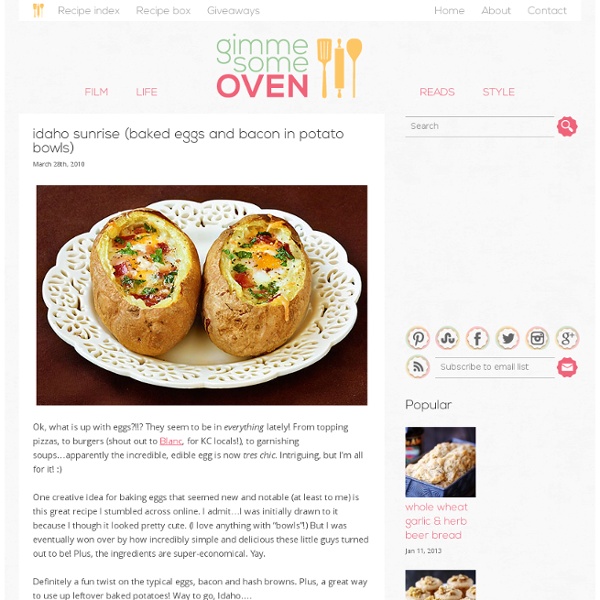 I probably should have poured a nice stiff drink recipe for you all on this loveliest of lovely tax days. Especially for my fellow small business owners who just gave half of their revenue back to the government. Good grief, I won’t even go there. Instead though, I thought I’d offer my idea of a more comforting alternative. Pasta. When life is good, and when life gets crazy, I turn to pasta. And just as it has for years, this one hit the spot. Read more This past Friday night was meant for celebrating. The weather was sit-out-on-the-deck-in-the-cool-evening-breeze perfection. And a very special birthday girl turned the big 3-0. Friends, meet Stacey. Read more TGIF, friends. Hope that you all have had a lovely week, and that a relaxing weekend lies ahead. Read more Ever since my friends and I met for a tapas happy hour at our neighborhood Spanish restaurant a few weeks ago, I’ve had sangria on my mind. Read more Read more I’ve always said that I like a good balance of cooking and baking in my life.

Orange rolls cooked in oranges over a fire First, a big giant welcome to all the new users from Pinterest and Pillsbury. I hope you enjoy TrulySimple and let me know what you think. We Went camping with our friends to Pismo Beach state park over the weekend and had a great time. We love Pismo Beach and especially love eating at Splash’s Cafe. Mmm...is for Mommy: Easy Barbecued Ribs I’ve never cooked ribs before. It’s something I’ve left to the pros, like my favourite, favourite, favourite BBQ joint, Boneheads BBQ. When we were out shopping Thursday night though, there was a pretty good deal on some small packs of pork back ribs, so I decided to give it a go. Friday morning, I remembered that there was a barbecue rib recipe in my new America’s Test Kitchen Slow Cooker Revolution cookbook and I knew it was going to be what I used.

Stuffed Shells with Sausage and Spinach Recipe After taking the photo for our sausage stuffed shells recipe, I scrambled into the kitchen to grab plates, knifes, forks and napkins — you know, like any normal person would do before sitting down to have a nice meal with their husband. Just as I was leaving the kitchen, I realized something. I left the shells with Adam. Alone. How he did it, I’m not sure, but in the time it took me to go to the kitchen, grab our supplies and get back to him, he had finished at least half of the shells. Bacon Cheeseburger Stuffed Mushrooms : : Miss in the Kitchen Bacon Cheeseburger Stuffed Mushrooms Happy New Years! These are at the top of my list for New Years Eve party appetizers. We like to spend New Years with our kids playing games, watching movies, and eating the best snacks.

Correcting The World's Wrongs With Campfire Bananas - Home - Burgh Baby "What are you doing?" my husband asked. He was staring at me as if I had eighteen heads, each with 20 piercings and Mike Tyson-esque tattoos. "Making Campfire Bananas," I said. Sour Cream Corn Pancakes I am not a lover of pancakes, except for The Pioneer Woman’s Sour Cream Pancakes. I don’t hate them, I just don’t love them. I don’t know what it is, I find that most pancakes are too heavy in the morning and if given the choice between pancakes and french toast, french toast will win every time in my book. However earlier this week Smitten Kitchen’s Sweet Corn Pancakes popped into my feed subscription and I was intrigued. Then I thought what if I did a hybrid of sweet corn pancakes and sour cream pancakes, it was one of those “things that make you go hmmmm” (name the band).

Hasselback Potatoes These Hasselback potatoes looks beautiful, don't' they? Here, I also added several cloves of garlic to these Swedish version of baked potatoes to enhance the flavor. It turned out great, they were very delicious, crispy on the outside and tender on the inside.. Updated: November 26th 2013 This is an updated post with a new video guide on How To Slice Hasselback Potatoes Hasselback Potatoes (Printable Recipe)

Turkey Ricotta Meatballs Recipe Ricotta cheese is the “secret ingredient” in these turkey meatballs to keep them ultra moist! Healthy, and delicious! If you take a look around CenterCutCook, not a single turkey recipe can be found! Lemons (Recipe: shrimp, lemon, herb and feta macaroni and cheese) - The Perfect Pantry I will never be tall. I always wanted to be tall, Brooke Shields tall, so I could be in the back row of group photos, and hang on to the strap on the New York subway without standing on tiptoe, and not care if tall people sit in front of me in theaters, which they always seem to do. I will never be fluent in French or Chinese. I will never be a trapeze artist, a cartoonist, an electrician, a pig farmer or a dentist. And I will never be a locavore. To be a locavore in New England -- a person who eats only what is produced within one hundred miles of home -- I'd have to give up coffee, shrimp and lemons.

The Italian Dish - Recipe Index (Readers: Please let me know if there are any broken links when you are trying to access a recipe. I try to keep up with errors in the recipe index, but stuff happens! Thank you.) Videos Apple Tart with Cinnamon Ice CreamHow to Debone a Whole Turkey BreastHow to Make Pie Dough in 60 SecondsHow to Roll out Gnocchi Making Fresh Pasta Roasted Tomato Soup Zucchini Soup CocktailsAperol SpritzBasil Lime CocktailCollinzanoEspresso ShotsLemon CaprisSgroppino The Ultimate Cinnamon Rolls ul⋅ti⋅mate [uhl-tuh-mit]–adjective 1. last; furthest or farthest; ending a process or series: the ultimate point in a journey 2. maximum; decisive; conclusive: the ultimate authority; the ultimate weapon. 3. basic; fundamental; representing a limit beyond which further progress, as in investigation or analysis is impossible 4. not to be improved upon or surpassed; greatest; unsurpassed: the ultimate recipe; the ultimate cinnamon roll. In every aspect of the word, ultimate is the right descriptor for this recipe. It was the first recipe I have tried for cinnamon rolls and it will likely be the last. I could not imagine wanting anything more out of a cinnamon roll. This perfect bun satisfied each sense: fragrance in through the nose, the variant warm colors, the squish of the fork, the warmth of the soft roll, the sweet cinnamon-y flavor and the sound of silence as you take a moment to revel in its perfection.

Creamy Penne with Garlic/ Сливочные Пенне с Чесноком This is an absolutely delicious creamy pasta without cream actually. So easy and quick- perfect for me! I use whole wheat penne here, to make it more healthy...well, you should know me by now:) ww penne for two handful roasted pepitas 1 egg yolk 2 garlic cloves some olive oil dried or fresh basilicum parmesan or sharp sheep cheese - optional Garlic Potato Fries I’m never going to make garlic potato fries any other way. These garlic fries, win hands down as the best garlic french fries I’ve ever made. Plus they are baked – so I won’t feel too guilty if I make it every time I’m craving for some potato comfort. When I read that there is garlic infused oil involved, my heart skipped a beat (in a good way, not the way oil would otherwise treat your heart).