Scientists discover a way to avoid teeth fillings that proves teeth can be regrown. Treating cavities with standard dental fillings may soon be a thing of the past, thanks to new research showing that damaged teeth have a natural ability to heal on their own. 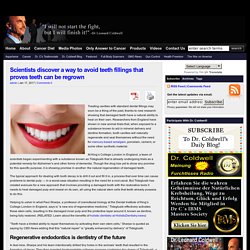 Researchers from England have shown in new animal trials that, when exposed to a substance known to aid in mineral delivery and dentine formation, tooth cavities will naturally regenerate and seal themselves without the need for mercury-based amalgam, porcelain, cement, or some other synthetic material. At King’s College London in England, a team of scientists began experimenting with a substance known as Tideglusib that is already undergoing trials as a potential remedy for Alzheimer’s and other forms of dementia.

Though the drug has yet to show any promise for this specific purpose, it is showing promise in another: the natural regeneration of damaged teeth. In test mice, Sharpe and his team intentionally drilled tiny holes in the animals’ teeth that resulted in the formation of decay. Sources: BBC.com CBSNews.com. Revolutionary New Dental Technique: Stem Cell Fillings Allow Your Teeth to Repair and Regenerate. By Dr. 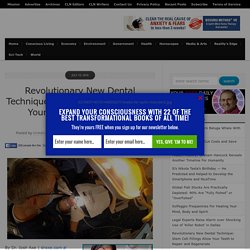 Josh Axe | draxe.com Did you know there’s a new type of dental filling that actually triggers your teeth to repair and regenerate themselves? It’s true. Researchers from Harvard University and the University of Nottingham recently developed a procedure known as stem cell fillings. In essence, it’s a regenerative dental filling that prompts the stem cells inside a person’s own tooth to heal itself. Related Article: ‘No Drill’ Dentistry Shows Fillings Aren’t Needed In Many Cases It’s a very common belief that existing tooth decay and cavities cannot be reversed, but that’s never actually been true.

One of the newest and best ways might just be stem cell fillings. How Do Stem Cell Fillings Work? Adam Celiz, PhD, research fellow at the University of Nottingham, explains: Existing dental fillings are toxic to cells and are therefore incompatible with pulp tissue inside the tooth. In short, the biomaterial filling would allow the tooth to heal itself. Final Thoughts on Stem Cell Fillings. The New Toothpaste That Could Leave Dentists Without Work. Source: World Truth A revolutionary invention for maintaining personal hygiene has been invented by a Japanese researcher Kazue Yamagishi. 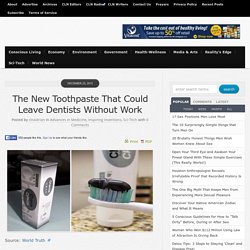 It’s about a new toothpaste that fills all the holes and cracks in the teeth and restore the tooth enamel. All this ultimately makes a lot of manipulations unnecessary , which dentists usually perform. In its composition the tooth paste of the Japanese researcher is similar with the tooth enamel, the only difference is that it is liquid.

Thus it can easily be applied to the affected area with a toothbrush. Related Posts: Invisibility Cloaks Are Close to Becoming A Manufacturable Reality. The first nanohydroxyapatite remineralizing toothpaste: Beauty. DENTAL PRODUCTS ｜ SANGI CO.,LTD. Medical Nano-hydroxyapatite (nano<mHAP>) Toothpastes Available on the open market Nanotech Apagard Anticaries & Restorative Whitening Sangi produces a wide range of toothpastes, including for professional and OEM use, all of which contain the anticaries remineralizing agent nano <mHAP>, and either zero or minimal abrasives. 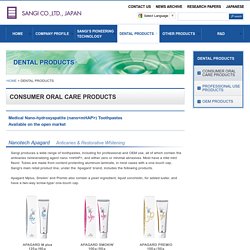 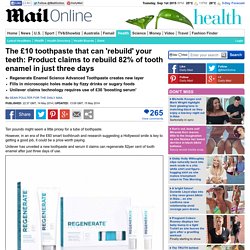