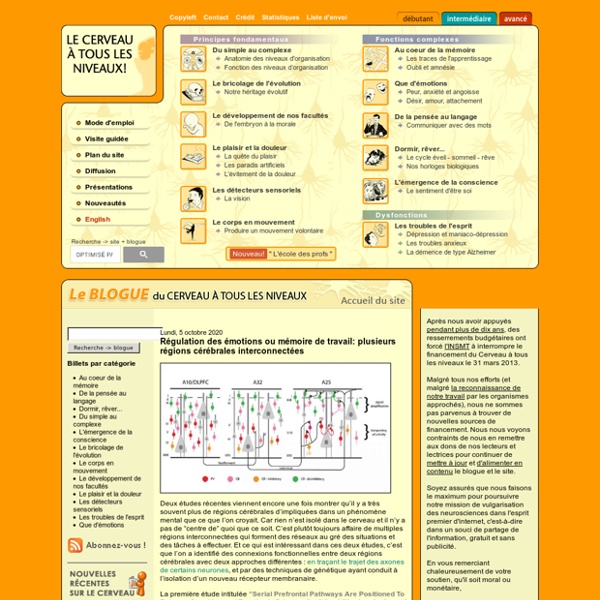 [ETUDE SCIENCE] Conscious Brain-to-Brain Communication in Humans Using Non-Invasive Technologies Human sensory and motor systems provide the natural means for the exchange of information between individuals, and, hence, the basis for human civilization. The recent development of brain-computer interfaces (BCI) has provided an important element for the creation of brain-to-brain communication systems, and precise brain stimulation techniques are now available for the realization of non-invasive computer-brain interfaces (CBI). These technologies, BCI and CBI, can be combined to realize the vision of non-invasive, computer-mediated brain-to-brain (B2B) communication between subjects (hyperinteraction). Here we demonstrate the conscious transmission of information between human brains through the intact scalp and without intervention of motor or peripheral sensory systems.

Earth - How much of your body is your own? This story is part of BBC Earth's "Best of 2016" list, our greatest hits of the year. Browse the full list. • Bill Gates is actually worth $1,956• Canadian pop star Justin Bieber has five times fewer cells in his brain than in his liver• Top tennis player Serena Williams has 24.5 trillion red blood cells powering her body• Internet and social media pioneer Mark Zuckerberg’s body contains 800MB of data• President Barack Obama’s head rules his heart; his brain weighs 1.4kg, his heart just 0.4kg Welcome to The Making of Me and You, a unique, new digital interactive from BBC Earth that details extraordinary personalised facts. Just input your date of birth, sex at birth, height and weight, and choose the metric or imperial units that make most sense to you.

Temple Grandin Early life and education[edit] Grandin was born in Boston, Massachusetts, to Eustacia Cutler and Richard Grandin. She was diagnosed with autism at the age of two in 1949. Xerox Business of Your Brain Brought to you by the minds at Xerox, Business of Your Brain® is a desktop app that analyzes your cerebral cortex (well, actually your Microsoft Outlook) to provide a snapshot of the things standing between you and your mind's ability to focus on real business. Examining your email, contacts, calendar of events and even the vocabulary you use, Business of Your Brain® highlights potential distractions including: Total time spent in meetings "Urgent" matters (that probably aren't) Long-winded emails and the people who send them Any and all mention of "Fantasy Football" Business of Your Brain® is for Microsoft Windows only (at least for now).

19-year-old inventor finds way to clean up the world’s oceans in under 5 years time By: Jack Taylor, Guest Previously the idea of cleaning up the world’s oceans with their vast accumulations of disposed plastic material was considered an impossibility. Now a 19-year-old inventor says he and his foundation has a way to clean up the world’s oceans, and not only does he say we can do it, but that we can do it in five years time and produce a profit from it. It is called the ‘Great Pacific Garbage Patch’ or sometimes the “Pacific Trash Vortex”, and it is a massive collection of plastic particles accumulating in the Pacific. Other oceans have their own collections of plastic wastes as well; furthermore, most of the debris in our oceans are plastic materials that accounts for approximately 90% of all the waste debris. Scientists have considered all manner of ways how the debris could be retrieved but there was no clear answer for it.

Sleep 'resets' brain connections crucial for memory and learning, study reveals For Jules Verne it was the friend who keeps us waiting. For Edgar Allan Poe so many little slices of death. But though the reason we spend a third of our lives asleep has so far resisted scientific explanation, research into the impact of sleepless nights on brain function has shed fresh light on the mystery - and also offered intriguing clues to potential treatments for depression. In a study published on Tuesday, researchers show for the first time that sleep resets the steady build-up of connectivity in the human brain which takes place in our waking hours. The process appears to be crucial for our brains to remember and learn so we can adapt to the world around us. The loss of a single night’s sleep was enough to block the brain’s natural reset mechanism, the scientists found.

There Are Three Surviving Elephant Species And They Have A Mammoth Inheritance There are three living species of elephants, not two, and their family tree is more complex than anyone realized, genetic analysis has revealed. The finding is important because it adds urgency to the quest to save the African forest elephant. It also represents the debut of a genetic technique that could help us understand other animals' heritage. The Neuroscience Revolution is Here: 5 Ways To Supercharge Your Brain With TechnologyTheFeelGoodLifestyle.com “The brain is the last and grandest biological frontier, the most complex thing we have yet discovered in our universe. It contains hundreds of billions of cells interlinked through trillions of connections. The brain boggles the mind.” ~James D. Watson, 1992

9 Tactics for Rapid Learning (That Most People Have Never Heard Of) Whenever the subject of why some people learn faster comes up, I get a whole host of common answers: Some people are just naturally smart. (Often implying you can’t improve)Everyone is “smart” in their own way. (Nonsense, research indicates different “intelligences” often correlate)IQ is all in the genes. (Except IQ changes with age and IQ tests can be studied for, like any other test)

How the Mathematics of Algebraic Topology Is Revolutionizing Brain Science The human connectome is the network of links between different parts of the brain. These links are mapped out by the brain’s white matter—bundles of nerve cell projections called axons that connect the nerve cell bodies that make up gray matter. The conventional view of the brain is that the gray matter is primarily involved in information processing and cognition, while white matter transmits information between different parts of the brain. The structure of white matter—the connectome—is essentially the brain’s wiring diagram. This structure is poorly understood, but there are several high-profile projects to study it.

Not an adaptation Misconceptions about natural selection and adaptation : Not an adaptation It's tempting to look for adaptive explanations for everything, from the shape of a flower petal, to the way your dog turns in a circle before it lies down to sleep, to your neighbor's strawberry blond hair. We could make up adaptive explanations, but there are other explanations to consider. Twitter is closer to emulate a Neural Network than Facebook When we think of Twitter and the innovation behind it, the first thing we all think is 140. 140 characters is without a doubt an amazing innovation that Twitter introduced which makes communication flow faster, forces twitters to summarize a piece of news or information, or an idea or an opinion and allows followers to get information or an idea faster as well. Also, after the introduction of url shorteners (tinyurl,com originally and many others later on such as bit.ly) an emergent property of Twitter came to life: the linked web. Any blog post or news article out there could be potentially linked multiple times in Twitter with quick summaries and opinions. Other emerging properties or elements in Twitter are:. Tags, early on twitters started using tags as a way to group events or themes together and follow them separately.. Curated content appeared more recently in an attempt to organize tweets in channels like mode.

50 Ways To Boost Your Brain Power 1) Meditate — Meditation has been known to increase IQ, relieve stress, and promotes higher levels of brain functioning. Meditation also activates the “prefrontal cortex” of the brain, an area responsible for advanced thinking ability and performance. 2) Draw A Picture — Drawing stimulates the right-hemisphere of the brain and inspires creativity. Get out the colored pencils and begin drawing your way to a powerful brain.