THE ~ Trump University: could a higher education scandal impeach a president? The US president-elect, Donald Trump, faces a civil trial in the fraud lawsuit against him over his now-defunct for-profit learning enterprise “Trump University”. 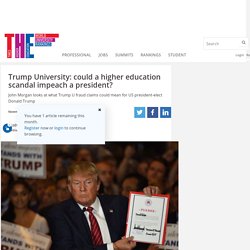 Various elements of that statement might take a while to sink in. The story – of former students saying that they were misled into believing that they would be taught by expert real estate tutors “hand-picked” by Trump – has been around since 2010 and was an issue in the presidential election campaign. Clearly, however, it was not that big an issue for plenty of voters. University of Utah researcher: Trump University lawsuits lay groundwork for potential impeachment of Donald Trump. As the presidential race continues to heat up, a new legal analysis released today by University of Utah S.J. 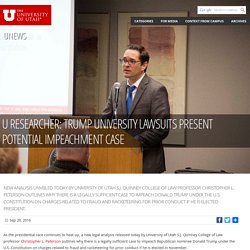 Quinney College of Law professor Christopher L. Peterson outlines why there is a legally sufficient case to impeach Republican nominee Donald Trump under the U.S. Constitution on charges related to fraud and racketeering for prior conduct if he is elected in November. In an analysis titled “Trump University and Presidential Impeachment,” Peterson explores Trump’s actions as the leader of Trump University, a for-profit business founded in 2005 where students spent upwards of $30,000 to learn real estate development skills. Trump asks to postpone Trump University trial until after inauguration. Lawyers for President-elect Donald Trump are formally requesting the postponement of a trial scheduled to begin later this month in a federal class-action fraud suit over his Trump University real estate seminar program. 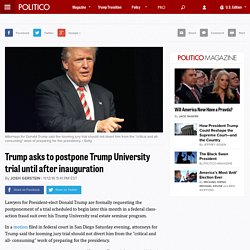 In a motion filed in federal court in San Diego Saturday evening, attorneys for Trump said the looming jury trial should not divert him from the "critical and all- consuming" work of preparing for the presidency. Story Continued Below However, Trump's lawyers said they're open to the idea of him giving another deposition in the case before he is sworn in on Jan. 20. "The President-Elect should not be required to stand trial during the next two months while he prepares to assume the Presidency. 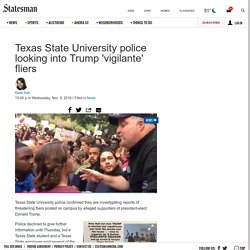 Police declined to give further information until Thursday, but a Texas State student and a Texas State employee said several of the fliers have been found around campus. "Now that our man Trump is elected and Republicans own both the Senate and the House -- time to organize tar & feather vigilante squads and go arrest and torture those deviant university leaders spouting off all this diversity garbage," at least one of the fliers reads, according to a photo that the university community is sharing.

If you would like to share any information or photos about this with the American-Statesman, email newstips@statesman.com. Around 6 p.m. Wednesday, university President Denise Trauth had shared a letter with students about the election encouraging students to seek to understand the divisions in the country. Shavonne Abella offers free hugs to passers-by at the University of Kansas.

Donald J. Trump on Twitter: "Nobody should be allowed to burn the American flag - if they do, there must be consequences - perhaps loss of citizenship or year in jail!" Welcome home! 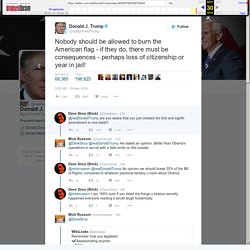 This timeline is where you’ll spend most of your time, getting instant updates about what matters to you. Tweets not working for you? Hover over the profile pic and click the Following button to unfollow any account. Say a lot with a little When you see a Tweet you love, tap the heart — it lets the person who wrote it know you shared the love. Spread the word The fastest way to share someone else’s Tweet with your followers is with a Retweet. Join the conversation Add your thoughts about any Tweet with a Reply. Learn the latest Get instant insight into what people are talking about now. Get more of what you love Follow more accounts to get instant updates about topics you care about. Find what's happening See the latest conversations about any topic instantly. Never miss a Moment Catch up instantly on the best stories happening as they unfold. What Trump's flag-burning tweet reveals. It’s unclear why, as of yet, but on Tuesday morning, President-elect Donald Trump woke up and at 6:55 a.m. decided he needed to tweet: “Nobody should be allowed to burn the American flag — if they do, there must be consequences — perhaps loss of citizenship or year in jail!” 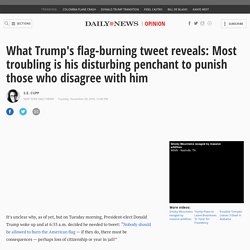 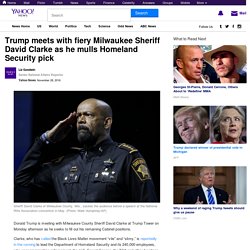 Clarke, who has called the Black Lives Matter movement “vile” and “slimy,” is reportedly in the running to lead the Department of Homeland Security and its 240,000 employees, who span immigration enforcement, the U.S. Secret Service, the TSA and other functions. Clarke, who ran for sheriff as a Democrat, has become a hero in the conservative movement in recent years for opposing the Black Lives Matter movement and efforts to reform the criminal justice system. In a fiery July speech at the Republican National Convention, Clarke brought the crowd to its feet as he chanted “Blue Lives Matter,” a reference to police uniforms. He celebrated the acquittal of a Baltimore police officer in the death of Freddie Gray during the speech. Mannequin Challenge: If Trump wins the 2016 election. #mannequichallenge #blackandblue #BlackLivesMatter. So we decided to do our #mannequichallenge. Troye Sivan on Instagram: "#mannequinchallenge Boston Edition"

Troye Sivan on Instagram: "I honestly could not love you guys more I'm dying" The Pussy Grabs Back Machine. PussyGrabsBack (@SheGrabsBack) #MercrediCestCharlie □ □□ #Felix Magnifique Couv'❗□□ #IlYADeQuoiAvoirPeurEnEffet □ #FuckTrump □□□ @CHVPSL. The Hamilton story hits 1st Amendment rights. LGBT issues. Vilification of opposition (esp. nonwhite). Trump lying. It's not a distraction. Yes #MikePence was at @HamiltonMusical here's what we had to say. Let it be known! Trump's Hamilton spat is a distraction, as @robfordmancs notes, but it's working. Overshadowed Trump University in US as soon as he tweeted. 'Hamilton' cast member delivers message to Vice President-elect Mike Pence.

Trump should target his rage at bigots and white supremacists instead of the "Hamilton" cast. Trump win rocks college campuses across the country. Donald J. 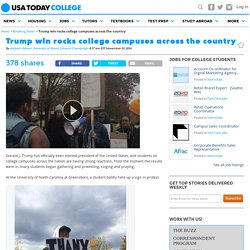 Trump has officially been elected president of the United States, and students on college campuses across the nation are having strong reactions. From the moment the results were in, many students began gathering and protesting, singing and praying. At the University of North Carolina at Greensboro, a student boldly held up a sign in protest. A group at the University of Oklahoma gathered around in a giant circle with their hands interlocked to peacefully protest a Trump presidency.

At least one campus had students gathered singing “Amazing Grace.” And at the University of Kansas, a student offered free hugs to anyone needing the love for the day. And numerous student groups around the nation held major protests. Over at the University of Texas at Austin, students held a massive protest against the presidential decision.

The students at UT Austin are declaring a need for solidarity. UT students filed towards the Texas Capitol, protesting as they went. Anti-Trump Protests Swell in Cities Across the U.S. Anti-Trump protests erupt in U.S. and abroad. Thousands protest Trump win around US. CHICAGO (AP) — The raw divisions exposed by the presidential race were on full display across America on Wednesday, as protesters flooded city streets to condemn Donald Trump's election in demonstrations that police said were mostly peaceful. 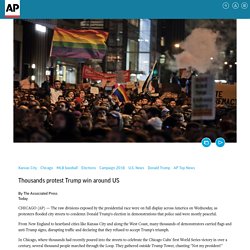 From New England to heartland cities like Kansas City and along the West Coast, many thousands of demonstrators carried flags and anti-Trump signs, disrupting traffic and declaring that they refused to accept Trump's triumph. In Chicago, where thousands had recently poured into the streets to celebrate the Chicago Cubs' first World Series victory in over a century, several thousand people marched through the Loop.

They gathered outside Trump Tower, chanting "Not my president! " Chicago resident Michael Burke said he believes the president-elect will "divide the country and stir up hatred. " He added there was a constitutional duty not to accept that outcome. Anti-Trump protests around the U.S. Thousands take to the streets to protest Trump win. "Not my President, not today," many across the nation yelled. 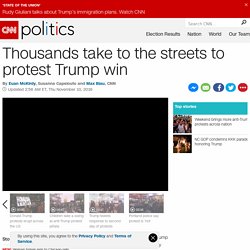 In cities from Boston to Los Angeles, thousands of demonstrators gathered Wednesday night in protest of election results that mean the billionaire real estate developer will be the next president. As many as 5,000 people were at a protest in New York, police estimated. Among the issues being yelled about outside Trump Tower were immigration and other controversial topics from the campaign. "I came out here to let go of a lot of fear that was sparked as soon as I saw the results," protester Nick Powers said.

He said he feared Trump will support stronger stop-and-frisk policies that would put many people in prison. Many of the protests were in cities with large Democratic bases -- in Atlanta; Austin, Texas; Boston; Chicago; Denver; Philadelphia; Portland, Oregon; San Francisco, Seattle and Washington. In Chicago, people walked down a normally busy Lake Shore Drive carrying signs. "We can't let it stop us. Chanting "love trumps hate" and "immigrants are welcome here," anti-Trump protesters nationwide take to city streets. Anti-Trump Protests Bring Thousands To Streets Around U.S. NYT 9nov2016 Anti-Trump Demonstrators Take to the Streets in Several U.S. Cities. Video BERKELEY, Calif. — Chanting “Not my president,” several hundred protesters streamed through the streets of Berkeley and Oakland in the predawn hours of Wednesday venting their anger at the election of Donald J.

Trump as president. Demonstrations were also reported in Pittsburgh, Seattle and Portland, Ore. The California Highway Patrol said that one protester, who was not identified, sustained major injuries after being hit by a car when protesters attempted to move onto a freeway. The demonstration was one of the first visible signs of anger in the liberal and heavily Democratic San Francisco Bay Area after Mr. From Pennsylvania to California, Oregon and Washington State, hundreds of people hit the streets, according to reports by local news media and The Associated Press. In Seattle, a group of about 100 protesters gathered in the Capitol Hill neighborhood, blocked roads and set a trash bin on fire. The chanting comes in waves here. Slide Show When it became clear that Mr. ‘Not My President!’ - Video.

Quick saveguard - to be ordered