Clay Shirky: How cognitive surplus will change the world 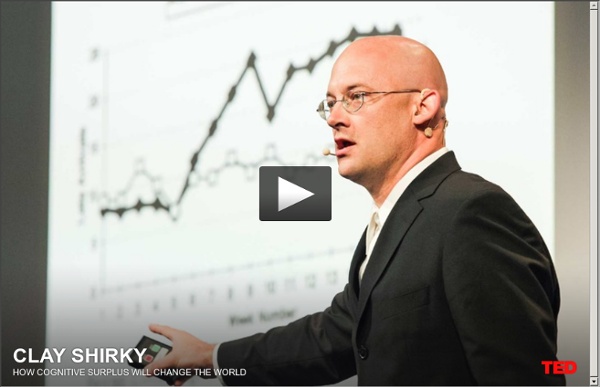 notthisbody personal cargo Some thoughts on the New Aesthetic. A few days ago Bruce Sterling posted an "Essay on the New Aesthetic", summing up his most recent thoughts after a panel at SXSW, similarly titled "The New Aesthetic - Seeing like digital devices". The focal point of definition for this New Aesthetic is well documented and a gestalt emerges quite quickly on the New Aesthetic tumblr, a juxtaposition of quotes, images, sensations, videos highlighting myriad examples of that which its curators are recognizing is already happening. In short, New Aesthetic touches in some sense the bleeding of the virtual dimension into the actual and our increasing reflection of our own methods of sensing in machines, and vice versa. What's surprising about Bruce's usually sardonic critique of modern culture is that he acknowledges his own excitement and novelty with NA, that perhaps it does indeed holds the potential for something new... I've felt this viscerally on spacecollective through these past years.

In praise of cooperation without coordination: Clay Shirky at TEDGlobal 2012 Amy Cuddy must be proud: Clay Shirky walks on stage and promptly strikes a power pose. Then he tells us of a 9-year-old Scottish girl who lives about 50 miles from here. Martha Payne started the foodblog NeverSeconds, for which she took her camera into school to document her lunches, using metrics such as “pieces of hair found in food.” First, she acquired dozens, then hundreds, then thousands of readers.

Rules of the Collaboratory Game If you’re a researcher studying schizophrenia, you can tap marvelous new tools such as functional magnetic resonance imaging and positron emission tomography. You can combine data from these devices for astonishingly powerful new views of how the brain works. What you can’t do is easily integrate data gathered by researchers outside your group. Enter the Biomedical Informatics Research Network, or BIRN. Funded by the National Institutes of Health, BIRN is a virtual collaboration project for biomedical big science. Mapping GitHub – a network of collaborative coders GitHub is a large community where coders can collaborate on software development projects. People check code in and out, make edits, etc. Franck Cuny maps this community (with Gephi), based on information in thousands of user profiles. The above is a map colored and sorted by the main language of each person (PHP, Python, Perl, Javascript, or Ruby).

Internet Comments and Civility You’re reading a story on the web and your eyes accidentally drift down to the comments. Within moments, lost in a sea of atrocious behavior and even worse grammar, your view of humanity clicks down another few notches. It’s an experience so common it’s spawned a mantra: Don’t Read The Comments. But why should this be so? The web is also filled with examples of altruism, kindness, and generosity. gavinkeech personal cargo phases are cycling through the increase of momentum brought on by interplay sequenced through recognition. exhausting parameters to their stretched states allow the decay values to become discovered. upon discovery, arrival of presence, flows to the environments ground. intensity of emotion, feelings entwined with realisation that the possibilities can arise more probable than initially conditioned, through emergence of understanding what is required, do vectors resonate inputs, to flow freely, in their own accord towards the electromagnetic* (resonance)+ core. state / mode as an interface ( points & flows with vectors ) personas / metaconstructs = state / mode identity / experience filter = timelines dimension / environment = interface process / mechanism = actions knowledge / repository = database timelines ( personas ) are extrapolations (verb)actions ( entanglement ) are amplifications (verb)interface ( metaconstructs ) are communications (verb)

Sensemaking In information science the term is most often written as "sense-making." In both cases, the concept has been used to bring together insights drawn from philosophy, sociology, and cognitive science (especially social psychology). Sensemaking research is therefore often presented as an interdisciplinary research programme. Sensemaking and information systems[edit] Dervin (1983, 1992, 1996) has investigated individual sensemaking, developing theories underlying the "cognitive gap" that individuals experience when attempting to make sense of observed data. Because much of this applied psychological research is grounded within the context of systems engineering and human factors, there exists a strong desire for concepts and performance to be measurable and for theories to be testable.

Let's Stop Confusing Cooperation and Teamwork with Collaboration Often the words collaboration, coordination, and cooperation are used to describe effective teamwork. But they are not the same, and when we use these words interchangeably, we dilute their meaning and diminish the potential for creating powerful, collaborative workplaces. Collaboration has been a big word in the news lately, most recently due to Marissa Mayer’s explanation of her decision to bring Yahoo employees back to the office: “To become the absolute best place to work, communication and collaboration will be important, so we need to be working side-by-side.” Mayer’s belief that we work together better when we have real relationships, and that it is easier to build relationships when you have face-to-face contact is not unfounded.

Continuous Partial Attention What is continuous partial attention? Continuous partial attention describes how many of us use our attention today. It is different from multi-tasking. The two are differentiated by the impulse that motivates them. When we multi-task, we are motivated by a desire to be more productive and more efficient. We’re often doing things that are automatic, that require very little cognitive processing. Global Ideas Bank The Global Ideas Bank's origins lie in the Institute for Social Inventions, which was set up in 1985 by Nicholas Albery, social inventor and visionary. From small beginnings (a network of inventors, a quarterly newsletter), the Institute grew into a full-fledged organisation under his leadership: producing an annual compendium, running social inventions workshops and promoting creative solutions around the world. It was part of the first European Social Innovations Exchange. In 2001, the Institute was awarded a Margaret Mead Special Recognition Award for "community creativity for a new century"

Teachers Training International – Helping you motivate, manage and engage your students One of the downsides of teaching is that in the process of educating our students about facts and figures we are also teaching our students how to think. For most teachers their initial response would be to not give this a second thought. However I wonder if this might be one of the greatest long term problems that education is facing right now.

Ideas bank Many ideas banks are provided as free of charge, or set around certain companies in general to work out new inventions. Although ideas are provided by a community of people, problems can arise when people take the ideas of the site and begin developing them.[citation needed] There is no possible way to prove that the idea on the ideas bank was original and not taken from something else. The front end of innovation is quite distinct from the remainder of the innovation process. When the very best ideas are discovered they can be managed with a stage gate oriented project management system, where the work flow is defined. The front end of innovation is commonly referred to as "fuzzy" because it functions best when a collaborative system nurtures chaos, disruption and the serendipitous discovery of ideas.

Techniques to Evaluate Ideas Since you can't and probably wouldn't want to use every idea, harvesting is the process of narrowing down the list to those most practical, valued and actionable. As a target, try to narrow initially to twice as many ideas as you believe you can implement, keeping in mind the Idea Funnel, above. Try to gain group support to the practical number of ideas that could be implemented, with practical consideration of other competing interests and intiatives, resources and alignment with organizational goals. While the original brainstorming group can certainly complete this harvesting activity, consider expanding the group to include senior leadership, other process stakeholders and customers and other interest groups -- like patients. A group of 12 - 20 is ideal for harvesting ideas.