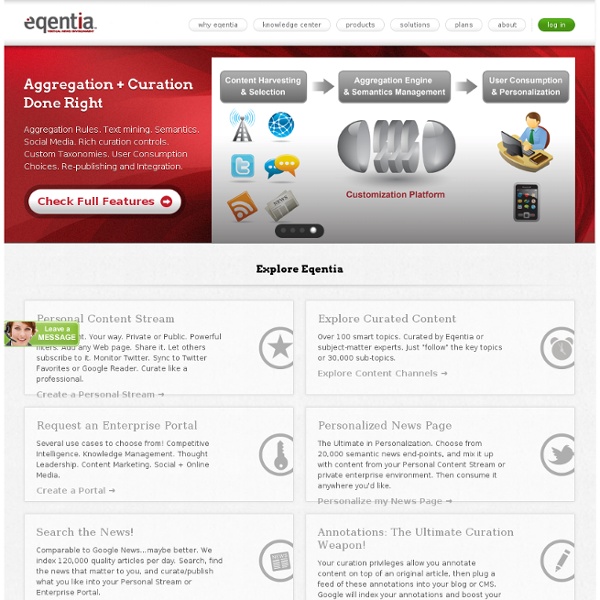 Web 3.0 A short story about the Semantic Web. Some Internet experts believe the next generation of the Web - Web 3.0 - will make tasks like your search for movies and food faster and easier. Instead of multiple searches, you might type a complex sentence or two in your Web 3.0 browser, and the Web will do the rest. For example, you could type "I want to see a funny movie and then eat at a good Mexican restaurant. What are my options?" The Web 3.0 browser will analyze your response, search the Internet for all possible answers, and then organize the results for you.­

Why Impresarios (Not Algorithms) Will Rule Web Video According to a number of predictors, and my friends, 2011 is going to be the year of curated video. The old, algorithmic approach is out, and instead we'll see audiences flocking to videos selected for your viewing pleasure by friends (in the case of Facebook) and experts (maybe even from YouTube). Yes, it looks like "curation" is bound to be the first big buzzword of 2011. But when it comes to video, before there was curation there was programming. About « The Overview Blog This blog is about the “Overview Effect”, the most commonly used term in the space community to describe the effect of space travel on the minds and lives of the astronauts. It’s dedicated to exploring every aspect of this experience; what causes it, the astronaut’s descriptions of its many aspects, as well as how the experience has affected them personally and often shaped their later lives; effects that they have nearly universally described as positive and often life changing. Effects they think will change the world. “No one who went into space wasn’t changed by the experience…I think some of them don’t see what happened to them.” - Dr.

Thoughts on Google Plus: The Magic Isn’t Social, It’s Semantic It’s been said that I’ve called Google Plus “one of the subtlest and most user-friendly ontology development systems we’ve ever seen.” I did, and you can listen for yourselves on the Semantic Link podcast. Why did I do so? Well, G+ follows some of the basic principles of linked data: it uses persistent HTTP URIs for people, Sparks (concepts) and posts. It allows you to indicate a relationship between to entities and give that relationship a type.

Can Curated Content save the Internet? The internet is stuffed with so much content that it long ago passed the point where we could hope to absorb even a small chunk of it. That’s called saturation point which leads to user fatigue (or fear of one’s head imploding from the inside). It isn’t pretty and the people aren’t happy. Accepting the general consensus that we need more not less content in our daily lives thanks to numerous channels, platforms and devices we seem to rely on, there’s only one real solution – we have to start organizing it. Not even the might of Google can keep up with content production, and searching the internet has become as frustrating as sweeping leaves in the middle of a tornado. That understood, the next phase of online’s evolution story is all about reigning in the chaos that is the internet and organizing it into some kind of collection that is relevant, granular and intuitive to the end user.

9 content curation tools that better organise the web Content curation is a huge deal on the web today. As content on the web grows exponentially, our ability to make sense of it is inversely proportional. In other words, we are fast sinking under the sheer amount of content pouring onto the web every day. The social web hasn’t made life any easier on content production either – in fact its lowered the barrier to entry. Evan Williams: The Challenges of a Web of Infinite Info: Tech News and Analysis « Evan Williams and I have known each other for a long time. From a struggling entrepreneur who started Blogger, to a successful founder who got liberal funding for his podcasting start-up Odeo, to the accidental launch of Twitter — to me, he has been pretty much the same person. He prefers to stay out of the limelight, leaving (most if not all the media duties) to his co-founder Biz Stone.

But What About the Content? Curation, Aggregation, and Creation Perhaps the biggest pain point for many organizations isn’t getting their video online, but rather getting their video created in the first place. Fear not; whether you need to create your own content, have your customers or employees create it for you, or collect it from other sources, there are ways to get high-quality video content on your site without breaking the bank. At the Online Video Platform Summit, our session, "But What About the Content? Curation, Aggregation, and Creation", will examine the growing field of video curation and aggregation services, as well as offer pointers for getting your own content made quickly and inexpensively. Confirmed speakers for this session include: Paolo Tosolini, Social Media and Online Video Consultant, Enterprise & Partner Group and Microsoft Services, Microsoft (Moderator) Paolo is an Enterprise Social Video consultant with a passion for people and creative ideas.

Metadata Metadata is "data about data".[1] There are two "metadata types;" structural metadata, about the design and specification of data structures or "data about the containers of data"; and descriptive metadata about individual instances of application data or the data content. The main purpose of metadata is to facilitate in the discovery of relevant information, more often classified as resource discovery. Metadata also helps organize electronic resources, provide digital identification, and helps support archiving and preservation of the resource. Metadata assists in resource discovery by "allowing resources to be found by relevant criteria, identifying resources, bringing similar resources together, distinguishing dissimilar resources, and giving location information." [2] Definition[edit]

Content Curation Tools from Mass Relevance 74 Flares Twitter 37 Facebook 5 StumbleUpon 0 Google+ 8 LinkedIn 5 inShare5 Buffer 5 Reddit 0 Pin It Share 14 14 Email -- Email to a friend 74 Flares × Some of you may be asking what content curation is. There’s a ridiculous volume of content being published on the web via Twitter, Facebook, blogs, news, YouTube and other mediums. Chances are that some of that content is valuable to your audience – but it requires some analysis, filtering and presentation in a manner that is helpful. The New Curators: Weaving Stories from the Social Web Back in March Robert Scoble verbalized something I have been feeling for a long time: that we need better tools to weave together the diverse and distinct bits and pieces of information on the web. These days news and information is being distributed and discussed on a range of platforms – places like Twitter, Facebook, RSS readers, YouTube, blogs and websites. However, the stories and issues at the heart of those various bits of content are much bigger than the sum of its parts. How, then can we bring these various parts of the web in conversation with each other, add context and tell a fuller story?