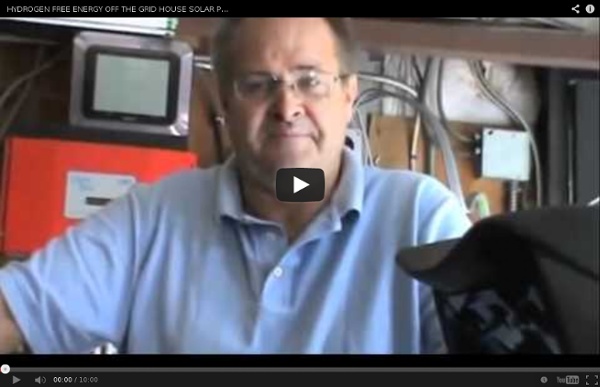 Hydropower from Reuse Reused: a small stepper motor as found in a printer 2 discarded CD-ROMs a foam tray some long stick (I used a piece of 20mm diameter PVC tube from demolition) a LED one or two tie-wraps a small piece of scrap paper Non-reused: The only non-reused part is the hot melt glue (I recommend the low temp type, especially when working with kids). Tools: scissors, screwdriver to disassemble the printer (not shown), cutting pliers or desoldering tools for (optional, not shown). With a bit of luck the LED can also be found in the discarded printer. With even more luck you can find some discarded electronics with a LED standing tall on a printed circuit board, with most of its legs still intact, instead of mounted flush on the board. This makes it easier to remove from the print (leave the legs as long as possible) and easier to connect to the stepper motor by simply inserting it in the plug. Now to start building, see the next step.

Nanoparticles Produce Renewable Hydrogen from Wastewater and Sunlight © HyperSolarRecent breakthroughs in the development of a renewable hydrogen technology will allow the use of almost any source of water to produce renewable (and carbon-free) hydrogen fuel. Producing hydrogen with a conventional electrolysis system uses electricity to separate hydrogen and oxygen from water molecules, but one big drawback to this method is the need for highly purified water as a source. But a new technology from HyperSolar eliminates this need, as it claims its nanotechnology can use "any source of water, including seawater and wastewater" to produce hydrogen, which would significantly reduce both the number of steps in the process, as well as the cost involved. HyperSolar's new technology uses a low-cost polymer coating and a small-scale solar device together to make a self-contained particle that can separate hydrogen from any water, using just the Sun's energy.

How to make batteries out of paint This article was taken from the January 2013 issue of Wired magazine. Be the first to read Wired's articles in print before they're posted online, and get your hands on loads of additional content by subscribing online. Researchers at Rice University, Houston, have created a battery made of paint. "We've airbrushed it on to tiles, polymers, glass and steel," says grad student Neelam Singh. Assemble your paintbox Your paintable lithium-ion battery comprises five coats of paint, each representing a component of the battery: the lithium-titanium anode, two current-collectors made of a solvent, a cobalt cathode, and a polymer separator that holds the electrolyte. Layer the components The paints have to be applied in a certain order: the separator is in the centre, between the anode and cathode, and the two current collectors seal the sandwich. Seal them up tightly To seal the battery, you can use the aluminium foil found in coffee-sachet packaging.

Breakthrough in hydrogen fuel production could revolutionize alternative energy market BLACKSBURG, Va., April 4, 2013 – A team of Virginia Tech researchers has discovered a way to extract large quantities of hydrogen from any plant, a breakthrough that has the potential to bring a low-cost, environmentally friendly fuel source to the world. “Our new process could help end our dependence on fossil fuels,” said Y.H. Percival Zhang, an associate professor of biological systems engineering in the College of Agriculture and Life Sciences and the College of Engineering. “Hydrogen is one of the most important biofuels of the future.” Zhang and his team have succeeded in using xylose, the most abundant simple plant sugar, to produce a large quantity of hydrogen that previously was attainable only in theory. Zhang’s method can be performed using any source of biomass. The discovery is a featured editor’s choice in an online version of the chemistry journal Angewandte Chemie, International Edition. The U.S. Jonathan R.

Only Organics Can Feed the Hungry World: Here's Why Students working on UGA's organic demonstration farm in summer 2012. (Photo: UGA College of Ag)A new approach to agriculture that combines the best in industrial production with organic and sustainable practices is the key to meeting the changing needs of a changing world, where resources are rapidly depleted by a growing population. "Are Organic Foods Safer or Healthier Than Conventional Alternatives?" is the title of a controversial report released last week by Stanford University's Center For Health Policy. The press weighed in with a bewildering range of instant reactions. The LA Times, on the other hand, pointed out in an editorial that the study largely ignored the ill effects of pesticide residues on conventionally-grown produce, and the hormones and antibiotic-resistant bacteria that taint factory-farmed meat and poultry. "When I started out farming," he told me, "it was like showing up at an assembly line day in and day out. No surprise there.

Inexpensive catalyst for producing hydrogen under real-world conditions found Researchers have found an inexpensive and efficient catalyst that can produce hydrogen for fuel cells at room temperature (Photo: Fezile Lakadamyali) Hydrogen has been hailed as the fuel of the future, but producing it cleanly using platinum as a catalyst is simply too costly to service the world's energy needs. On the flipside, producing hydrogen with fossil fuels not only releases CO2 as a byproduct, but is unsustainable, negating hydrogen's green potential. However, hydrogen may yet make good on its promise thanks to a group of scientists at the University of Cambridge. They found that cobalt can function as an efficient catalyst at room temperature in pH neutral water surrounded by oxygen. Compared to platinum, cobalt is relatively abundant and therefore inexpensive – a recipe that could make all the difference if we're going to complete a transition to alternative energy sources over the next 50 years. However, cobalt is not a magic bullet. Source: University of Cambridge

…7 POINTS AGENDA ON GREEN ECONOMY FOR SUSTAINABLE DEVELOPMENT | I SEE A CHANGE Nigeria has been largely unfortunate not to have good and progressive political leaders, and this has resulted in perpetuating Nigeria in poverty and underdevelopment despite her huge GREEN ECONOMY. This persistent failure of the Nigeria System has produced a large army of bitter critics, who consistently point out the ills in the Governance of Nigeria and potter alternative ways of doing it better. Toward the Sustainable Development Conference [RIO+20] in Brazil. 1. 2. 3. 4. 5. 6. 7. The above lists are my dream for Green Economy for Sustainable Development in Nigeria. Olumide IDOWU | Developmental Consultant | AIESEC Nigeria | olumide.idowu@aiesec.net | www.olumideidowu.blog.com | +2348133451818 This entry was posted on Wednesday, June 20th, 2012 at 8:30 pm and is filed under Uncategorized.

Computer model indicates promising new catalyst for generating hydrogen from water Research conducted at Princeton and Rutgers Universities offers hope of synthetic catalysts that could produce hydrogen from water (Photo: Shutterstock) Hydrogen is often hailed as a promising environmentally-friendly fuel source, but it is also relatively expensive to produce. However, new research conducted at Princeton University and Rutgers University poses the opportunity to produce hydrogen from water at a lower cost and more efficiently than previously thought possible. The research, led by Princeton chemistry professor Annabella Selloni, takes its inspiration from nature – or more specifically, a bacterium that produces hydrogen from water by using enzymes known as di-iron hydro­ge­nases. In a paper published in the Proceedings of the National Academy of Sciences of the United States of America, Selloni and her co-authors detail how they made changes to existing water-to-hydrogen catalysts, which are often blighted by a susceptibility to oxygen poisoning. About the Author

The Most Incredible 3-D Printed Things We’ve Ever Seen ⚙ Co The levees have broken for 3-D printing, and the resulting deluge of printing-concepts-on-the-cheap is flowing faster than we can gather. The best of these rise to the surface for their innovating predictions of a faster/safer/healthier future. A Robotic Hand That Doesn’t Cost An Arm And A Leg Teen engineer Easton LaChappelle created his first robotic hand out of Legos, fishing wire, and surgical tubing--a feat that earned him 3rd place at the Colorado Science Fair. Speaking at TEDxMileHigh last month, LaChappelle presented the arm, which features as much motion and almost as much strength as a human arm and costs just $400. [Image credit: TEDxMileHigh] Kowabunga, Customized MADE boards, based in Chicago, is running a Kickstarter campaign to fund a new production process for custom, 3-D-printed “SmartBoards.” [Image credit: MADE, LLC] Prosthetics As Fashionable As They Are Durable [Image credit: Bespoke Innovations] Sugar That’s Sweet For The Eyes, Too [Image credit: The Sugar Lab]

Real Animals That You Didn't Know Existed Maned Wolf The world we live in is filled with exotic wildlife, and that means more than just lions and giraffes. There are a multitude of species that are lesser known to the general public and fascinating to learn more about. One animal that preggit features is the maned wolf, which looks like it's a red fox that mated with a deer to create a furry, lovable face with long, slender legs, but is actually its own type of mammal. Top photo: The maned wolf is the largest canid in South America, resembling a large fox with reddish fur. Fossa The fossa is cat-like, carnivorous mammal that is endemic to Madagascar. Barbirusa Babirusa, meaning "Hog-deer," are members of the pig family found in Wallacea, or specifically the Indonesian islands of Sulawesi, Togian, Sula and Buru. Zebra Duiker The zebra duiker is a small antelope found in the Ivory Coast and other parts of Africa. Pink Fairy Armadillo Amazonian Royal Flycatcher Gerenuk Patagonian Mara Raccoon Dog Snub-Nosed Monkey Southern Red Muntjac Dhole