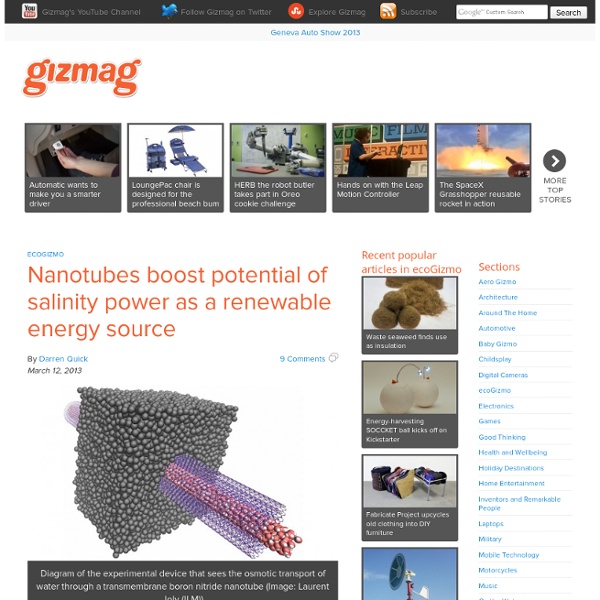 In November 2009, Norwegian state owned electricity company Statkraft opened the world’s first osmotic power plant prototype, which generates electricity from the difference in the salt concentration between river water and sea water. While osmotic power is a clean, renewable energy source, its commercial use has been limited due to the low generating capacities offered by current technology – the Statkraft plant, for example, has a capacity of about 4 kW. Now researchers have discovered a new way to harness osmotic power that they claim would enable a 1 m2 (10.7 sq. ft.) membrane to have the same 4 kW capacity as the entire Statkraft plant. The global osmotic, or salinity gradient, power capacity, which is concentrated at the mouths of rivers, is estimated by Statkraft to be in the region of 1,600 to 1,700 TWh annually. The Statkraft prototype plant (and a planned 2 MW pilot facility) relies on the first method, using a polymide membrane that is able to produce 1 W/m2 of membrane. Related:  Energy Sources & Generation

Will Alternative Energy Growth Tank During New Fossil-Fuel Glut? [Slide Show] NATIONAL HARBOR, Md.—The artificial leaf promised to revolutionize the world by bringing reliable modern energy to those mired in poverty. But the company founded to commercialize the research—Sun Catalytix—has found that it needs to concentrate its efforts on something likely to make money in the nearer term, namely the kind of flow batteries that might provide large amounts of energy storage on the U.S. electric grid. The alternative energy landscape is in tumult, judging by the recent fourth annual summit of the Advanced Research Projects Agency for Energy, or ARPA–E. Funding for alternative energy—whether from the federal stimulus bill or venture capitalists—has dried up. More than 250 exhibitors came to show their wares alongside ARPA–E efforts ranging from Smart Wire Grid's power-flow controllers for electricity transmission lines to OPX Biotechnologies's modified microbe that builds liquid fuels from hydrogen and carbon dioxide. View a slide show of future energy efforts.

Distributed generation: Fuel cells for on-site power plants Courtesy ofNick Fontaine The Inland Empire Utilities Agency’s Regional Water Recycling Plant No. 1 sits next to a golf course 40 miles east of downtown Los Angeles. It’s been treating wastewater from the small city of Ontario and other nearby exurbs since 1948. The plant scoops up large objects and screens out sand and gravel for disposal in a landfill, then adds and removes chemicals and nutrients before the de-poopified water is used for irrigation or discharged into nearby Cucamonga Creek. It’s an unremarkable facility, like thousands of similar ones across the United States, doing the grunt work of modern life that most people would rather not think about. It was unremarkable, that is, until last October. Fuel cells solved a number of problems for the agency, all of which point to why these “distributed generation” facilities should become a growing source of electricity. The fuel cells convert that liability into an asset by making electricity from the methane.

The missing link: Why Australia needs energy storage In visiting Australia regularly for the last two decades I have never quite understood why greater value is not placed on the nation’s latent solar and nuclear energy assets. Perhaps it is because Australia thinks there is a vital missing link: the ability to store energy. With renewable sources such as wind, wave and solar, energy is often created in the wrong place at the wrong time, making it difficult to utilise. Australians aspire to use renewable resources but are thwarted by the practicalities of renewables’ use in future energy generation and supply systems. In Australia, climate change legislation is driving decarbonisation. This will shift the energy provision and create new markets. In the UK, the electricity generation mix and the opportunities are very different. This value comes from understanding where the different energy storage technologies fit into the grid at generation, transmission and distribution. Which way is the best way? Click to enlarge

This graph of the day shows baseload generation may be redundant soon. Please click here for more graphs of the day Anyone who has observed recent developments in Germany, and to a growing extent in Australia, will have noted the rapidly changing dynamics of electricity markets caused by the growth in renewables. So much so, that according to this graph of the day, the concept of baseload power may be redundant in Germany within a decade. The graph of the day shows how Germany’s electricity market might look like in 2022, in a week of August, when windy and sunny weather help wind farms and solar plants deliver most of the electricity requirements, needing little extra from fossil fuel plants (nuclear power has already been closed). On the other days, however, there is less wind and solar, so more fossil fuel is required. What does this mean for baseload power stations? That’s because they will get squeezed out of the market. Please click here for more graphs of the day.

A silicon sprinkle for electric cars Research Scientist Werner Filtvedt collects silicon powder from the freespace reactor at the Institute for Energy Technology Kjeller, on the outskirts of Oslo. (Photo: Arnfinn Christensen, forskning.no) A heavy gas sinks down through a vertical metal cylinder at the Institute for Energy Technology (IFE). The gas is silane, a compound of hydrogen and silicon (SiH4). It’s hot inside the pipe, nearly 1000° C. Four hydrogen atoms are split off, leaving a single atom of silicon. Werner Filtvedt, Trygve Tveiterås Mongstad and Jan Petter Mæhlen can fish this agglomerate powder of silicon out from the base of the cylinder. Rigorous specifications The silicon powder can replace graphite as the positive electrode − the anode − in lithium-ion batteries. But these properties also create special problems, so the powder has to meet stringent standards. The problems are linked to the way a battery creates electricity. Fine and even Silicon has ten times graphite’s capacity for taking on lithium.

Energy company to test floating solar islands Swiss energy company Viteos has announced that it is to build three floating solar arrays on Lake Neuchâtel. Viteos will work with tech company and "energy enabler" Nolaris to build the 25-m (82-ft) diameter islands, each with 100 photovoltaic panels. View all Viteos stresses that the islands are for research and development purposes rather than a practical and cost-effective means of generating energy. In a press release, Viteos Technical Director Philippe Burri explained that the islands would allow the company to observe the corrosive effects of water, wind and waves on the installation. Lake Neuchâtel, Switzerland (Image: TerraMetrics/Google) The islands will supposedly rotate through 220° in order to track the sun to maximize generation. Viteos says will be kept at Neuchâtel port between May and August before being towed and installed at their final location by early 2014. Source: Viteos, via PV Tech About the Author Post a CommentRelated Articles

New discovery could mean making fuel from carbon in atmosphere CleanTechnica If we’ve learned anything from the totality of human history, it is that if we ever find anything in great enough abundance, we’ll try to use it for something that benefits us. One need only look at the coal deposits, forests, and oceans for proof of this. This instinctual human trait has been the cause of numerous conflicts and problems, including the highly publicised anthropogenic global warming that has caused our current climate change. Our atmosphere is slowly suffocating on increased levels of carbon dioxide which are trapping heat and warming our planet, slowly melting the ice caps, raising the sea level, and pushing warmer latitudes closer to the poles. But now, researchers at the University of Georgia, USA, have found something that we have in abundance and created something useful out of it. “What this discovery means is that we can remove plants as the middleman,” said Adams, who is co-author of the study.

Trees used to create recyclable, efficient solar cell Solar cells are just like leaves, capturing the sunlight and turning it into energy. It's fitting that they can now be made partially from trees. Georgia Institute of Technology and Purdue University researchers have developed efficient solar cells using natural substrates derived from plants such as trees. The technology is published in the journal Scientific Reports, the latest open-access journal from the Nature Publishing Group. The researchers report that the organic solar cells reach a power conversion efficiency of 2.7 percent, an unprecedented figure for cells on substrates derived from renewable raw materials. Georgia Tech College of Engineering Professor Bernard Kippelen led the study and says his team's project opens the door for a truly recyclable, sustainable and renewable solar cell technology. To date, organic solar cells have been typically fabricated on glass or plastic. A provisional patent on the technology has been filed with the U.S.