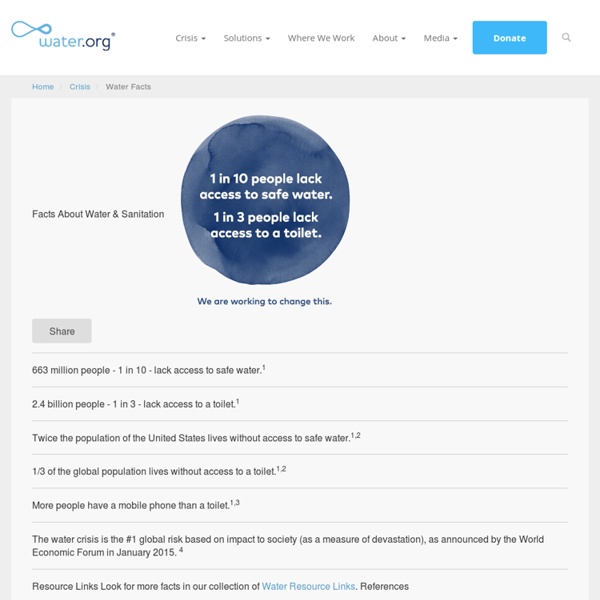 Water 1 in 10 people lack access to safe water Sanitation 1 in 3 people lack access to a toilet Women & Children Women and children spend 125 million hours each day collecting water Disease Every 90 seconds a child dies from a water-related disease Economics Every $1 invested in water and sanitation provides a $4 economic return Facts About Water & Sanitation Share 663 million people - 1 in 10 - lack access to safe water.1 2.4 billion people - 1 in 3 - lack access to a toilet.1 Twice the population of the United States lives without access to safe water.1,2 1/3 of the global population lives without access to a toilet.1,2 More people have a mobile phone than a toilet.1,3 The water crisis is the #1 global risk based on impact to society (as a measure of devastation), as announced by the World Economic Forum in January 2015. 4 Resource Links Look for more facts in our collection of Water Resource Links. References Donate now Get involved chevron_right Enewsletter sign-up

Poverty Facts and Stats This figure is based on purchasing power parity (PPP), which basically suggests that prices of goods in countries tend to equate under floating exchange rates and therefore people would be able to purchase the same quantity of goods in any country for a given sum of money. That is, the notion that a dollar should buy the same amount in all countries. Hence if a poor person in a poor country living on a dollar a day moved to the U.S. with no changes to their income, they would still be living on a dollar a day. The new poverty line of $1.25 a day was recently announced by the World Bank (in 2008). For many years before that it had been $1 a day. The new figures from the World Bank therefore confirm concerns that poverty has not been reduced by as much as was hoped, although it certainly has dropped since 1981. However, it appears that much of the poverty reduction in the last couple of decades almost exclusively comes from China:

Evidence The Earth's climate has changed throughout history. Just in the last 650,000 years there have been seven cycles of glacial advance and retreat, with the abrupt end of the last ice age about 7,000 years ago marking the beginning of the modern climate era — and of human civilization. Most of these climate changes are attributed to very small variations in Earth’s orbit that change the amount of solar energy our planet receives. Scientific evidence for warming of the climate system is unequivocal. The current warming trend is of particular significance because most of it is very likely human-induced and proceeding at a rate that is unprecedented in the past 1,300 years.1 Earth-orbiting satellites and other technological advances have enabled scientists to see the big picture, collecting many different types of information about our planet and its climate on a global scale. The evidence for rapid climate change is compelling: Sea level rise Global temperature rise Warming oceans Glacial retreat

Hunger Stats Every year, authors, journalists, teachers, researchers, schoolchildren and students ask us for statistics about hunger and malnutrition. To help answer these questions, we've compiled a list of useful facts and figures on world hunger. Some 795 million people in the world do not have enough food to lead a healthy active life. The vast majority of the world's hungry people live in developing countries, where 12.9 percent of the population is undernourished. Asia is the continent with the most hungry people - two thirds of the total. Sub-Saharan Africa is the region with the highest prevalence (percentage of population) of hunger. Poor nutrition causes nearly half (45%) of deaths in children under five - 3.1 million children each year. One out of six children -- roughly 100 million -- in developing countries is underweight. One in four of the world's children are stunted. WFP calculates that US$3.2 billion is needed per year to reach all 66 million hungry school-age children. 1.

Top 10 Most Urgent Problems in the World (Before It's News) World Bank economist Jean-Francois Rischard argues that the international community is still living through some truly momentous times. Our capacity to tackle a variety of complicated social and economic problems is greater at the turn of the new century than has been the case at anytime during the last few centuries. Technological development, economic prosperity and cultural evolution, all characteristics of globalization, have sharpened our ability to resolve many of the social evils that still exist today. Identifying the right tools to fit the problem is key, but the first step we need to take is to identify and understand what are the most pressing issues and which of them are global. If we see these issues as global then it follows, in an increasingly interdependent world, that we have to develop an approach that involves all nations working within a framework to resolve them. The next twenty years will be of great importance to our planet. 1. 2. 3. 4. 5. Source:

World Nuclear Stockpile Report The exact number of nuclear weapons in global arsenals is not known. With little exception, each of the nine countries with nuclear weapons guards these numbers as closely held national secrets. What is known, however, is that more than a decade and a half after the Cold War ended, the world's combined stockpile of nuclear warheads remain at unacceptably high levels. Hans Kristensen and Robert Norris of the Federation of American Scientists are the leading experts in estimating the size of global nuclear weapons inventories. As the authors of these estimates note, the above numbers may not add up due to rounding and uncertainty about the operational statuses and size of the total inventories.