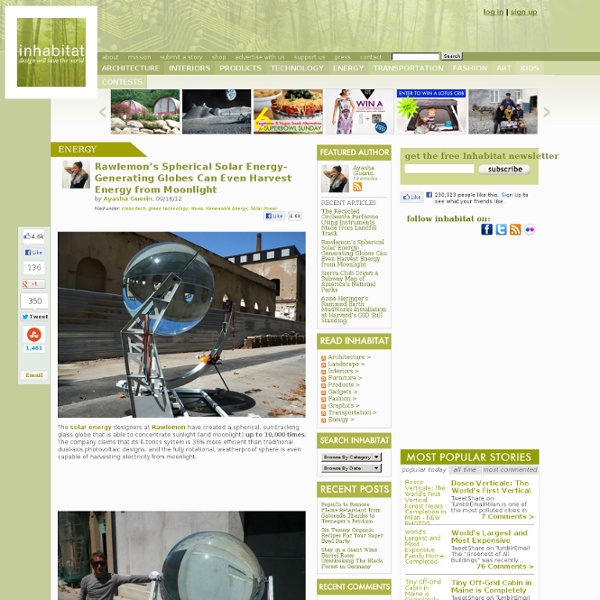 The solar energy designers at Rawlemon have created a spherical, sun-tracking glass globe that is able to concentrate sunlight (and moonlight) up to 10,000 times. The company claims that its ß.torics system is 35% more efficient than traditional dual-axis photovoltaic designs, and the fully rotational, weatherproof sphere is even capable of harvesting electricity from moonlight. The ß.torics system was invented by Barcelona-based German Architect André Broessel. He sought to create a solar system that could be embedded in the walls of buildings so that they may act as both windows and energy generators. The spheres are able to concentrate diffused moonlight into a steady source of energy. + Rawlemon Via Designboom Related:  Solaire

Giant Marble Harvests Energy from Sun and Moon It looks like a giant, glass marble. But this globe is no game. It's a sun-tracking, solar energy concentrator created by Barcelona-based architects and, according to the designers, is able to collect not just sunlight but moonlight as well. The Rawlemon project revolves around a weatherproof sphere that's designed to rotate and follow the sun across the sky. It's so sensitive to light that at night, it can even harvest moonlight and convert it into electricity. Andre Broessel, the architect and designer, says his spherical, sun-tracking glass globe is able to concentrate sunlight and moonlight up to 10,000 times and that the system is 35 percent more efficient than photovoltaic designs that track the sun. via Design Boom and Inhabitat Credit: Andre Rawlemon ANALYSIS: Solar Panels Light Up the NFL

Windshield Shade Solar Funnel Cooker Windshield Shade Solar Funnel Cooker While experimenting with various designs of cookers over the past year to introduce in the indigenous communities where I live and work in southern Mexico, I hit upon an utterly simple way to make an instant portable solar oven. Taking a reflective accordion-folded car windshield shade, you can turn it into a version of the solar funnel, by simply sewing on little Velcro tabs along the long notched side. Here’s how: Lay the sunshade out with the notched side toward you, as above. The funnel can be tilted in the direction of the sun. A stick placed across from one side of the funnel to the other helps to stabilize it in windy weather. After cooking, simply fold up your “oven” and slip the elastic bands in place for easy travel or storage. I have found this totally simple solar oven extremely practical, as it is so lightweight and easy to carry along anywhere. Kathy Dahl-Bredine Apdo. 1332 Oaxaca, OAX 68000 kpdbmx@gmail.com

Solar Energy is capable of powering Australia. Solar Energy is capable of powering Australia. “The Magazine of Engineers Australia”, Vol 80, No. 9, Sept 2008, page 20 “Economically viable Power from the Sun Half of Australia’s renewable energy target could be generated from solar power by 2020, according to engineering services company WorleyParsons. Meurs said the company’s research has found that Australia’s desert regions would be ideal locations for such plants and the optimal size would be 250 Mega Watts. The company invited potential customers to participate in a feasibility study and received a very favbourable response, Meurs said. The proposed technology would be parabolic mirrors focusing sunlight onto tubes containing thermal oil. The plants would cater for power demand during the day, with some heat storage capacity in molten salt to cover the evening. Each solar plant would require no more land than a conventional coal fired power station. Anti-renewables = anti-business. Pro nuke = anti small businesss with local control.

INSTANT SURVIVAL TIP: Improvised Water Filter By John A. Heatherly, Author of The Survival Template photo from AFR 64-4, Figure 19-15, page 189 A variety of events can contaminate ordinary, working sources of water. For example, rainstorms, or even worse, hurricanes, can pollute tap-water that is normally clean. The figure above illustrates a three-stage water filter built out of a tripod and porous cloth. Projects such as this water filter can also make for great fun on family outings and camping trips. Anyone have experience with filters similar to this one? © 2012, John A.

Up on the Roof By Michael Brune, Sierra Club’s Executive Director Let me start with a confession: I’m the executive director of the country’s largest environmental organization, and I don’t have solar panels on my roof. Now wait a minute. Before you judge, I do have a few justifications. Until now. Last year, the Sierra Club ran a pilot program in California to spread the news to our members and supporters that there’s never been a better time to add solar panels to their roofs. Our pilot program was successful enough that we’re expanding it to seven states: Arizona, California, Colorado, Connecticut, Maryland, Massachusetts, and New York. But the economics are far from the only reason you should check out solar leasing. If you’re interested in being a part of the Sierra Club’s program, the first step is to do what I did: Request a solariQuote. Once you supply some data on your utility bills, you can find out exactly how much you can expect to save (based on the plan you choose). Related Stories:

Solar Generator - Amazing Solar Generator Is Like Having A Secret Power Plant Hidden In Your Home The Solar Trade War Demystified NOTE: This is a guest post by Erica Etelson, a blogger for Mosaic, an online marketplace for investing in solar. Follow her at @iluvsolar. Recently, the U.S. Commerce Department imposed tariffs on $3 billion a year worth of Chinese solar panel imports. Non-Chinese solar panel manufacturers contend that China is able to “dump” cheap panels on the global market thanks to lavish Chinese government subsidies. It’s a complicated, wonky issue even for solar geeks like me, and there are compelling policy justifications for and against the tariffs. Solar Tariffs: The Pros - The Chinese solar industry is undermining US solar manufacturing by flooding the market with cheap panels, and tariffs could help level the playing field. - Instead of dumping panels on the global market, China can and should install them domestically. - Cheap PV panels stifle innovations like thin film solar. Related Stories: Oil-Soaked Saudi Arabia Sets Goal of 100% Renewable Energy