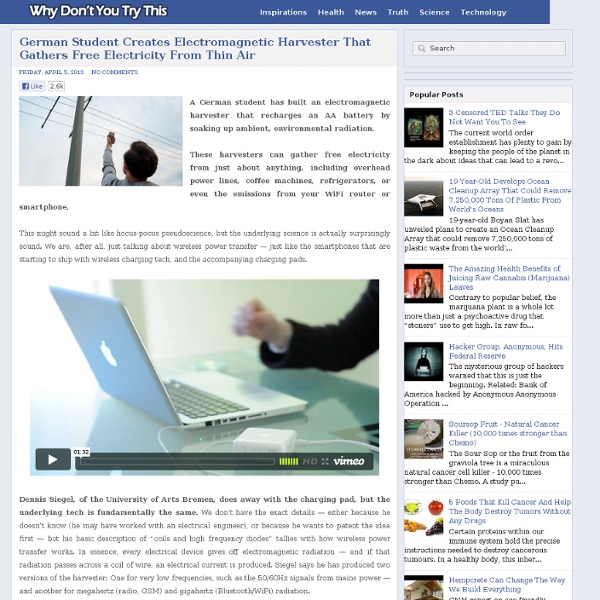 A German student has built an electromagnetic harvester that recharges an AA battery by soaking up ambient, environmental radiation. These harvesters can gather free electricity from just about anything, including overhead power lines, coffee machines, refrigerators, or even the emissions from your WiFi router or smartphone. This might sound a bit like hocus-pocus pseudoscience, but the underlying science is actually surprisingly sound. Dennis Siegel, of the University of Arts Bremen, does away with the charging pad, but the underlying tech is fundamentally the same. In essence, every electrical device gives off electromagnetic radiation — and if that radiation passes across a coil of wire, an electrical current is produced. The efficiency of wireless charging, however, strongly depends on the range and orientation of the transmitter, and how well the coil is tuned to the transmitter’s frequency. As a concept, though, Siegel’s electromagnetic harvester is very interesting. Related: Related:  INGENUITY

Nikola Tesla The Secret Movie - Unlimited Free Energy Forever Encyclopedia Britannica lists Nikola Tesla as one of the top ten most fascinating people in history. Nikola Tesla was an electrical engineer who changed the world with the invention of the AC (alternating current) induction motor, making the universal transmission and distribution of electricity possible. So why is he virtually unknown to the general public? Today we pay for electricity as Tesla's free energy devices were destroyed by J.P. “Electric power is everywhere present in unlimited quantities and can drive the world's machinery without the need of coal, oil, gas, or any other of the common fuels.” “My brain is only a receiver. The Missing Secrets Of Nikola Tesla “Ere many generations pass, our machinery will be driven by a power obtainable at any point of the universe. “When wireless is perfectly applied the whole earth will be converted into a huge brain, which in fact it is, all things being particles of a real and rhythmic whole. Related Posts

Cloudbuster & Orgone Generator: How to disperse Chemtrails HHG Construction If you want to clear out the unpleasant entities from your immediate environment, expel parasitic/predatory ET’s from your auric field, neutralize the energetic effects of chemtrails, etc., just make one or more of these and put it on the ground or in your house, according to your intuitive promptings. My partner, Carol, and I have found ! them very effective for minimizing the deadly orgone fields around nuke plants, even the ones built on natural vortices (sick puppies did that intentionally). They also heal and strengthen all natural vortices and man-made ones, like the Caribbean Blue Holes. Life doesn't have to be difficult and years of training and discipline are no longer necessary if you want to do big magic, to which I can bear witness. There are plenty of people who are nice, but these aren’t generally smart. You might think I’m digressing, but the Y factor is very important when working with orgone. A couple of cups of aluminum particles (OR a pint of BB’s).

How to Make "Chembusters" (CB's) From Don Croft & Ken Adachi's "Goodbye Chemtrails, Hello Blue Skies!" on Educate-Yourself.org. History of the Cloudbuster The Wilhelm Reich Cloudbuster was well known for its ability to create rain. The Cloudbuster Re-Invented By utilizing the research of Wilhelm Reich, we have created a cheap, portable and easy-to-build device that consistently destroys Chemtrails and heals the atmosphere. Join The Battle - Now! It is human nature to sit on the sidelines and think that one person cannot change the things that are happening to our country. A properly constructed CB unit should be able to greatly reduce the effects of chemtrails for about 45 miles in all directions (90 mile diameter) from the unit. With this device a mere few hundred concerned citizens can SHUT DOWN the multi-billion dollar chemtrail program. Chembuster Construction Details Chembuster Materials Set pipes in bottom spacer Middle Plywood Spacer BUCKET: Base: 9" in dia., 9" deep. Not to scale Widest circle is 9 1/8” Dr.

Multiple Scientists Confirm The Reality of Free Energy – Here’s The Proof Who is benefiting from suppressing scientific research? Whose power and wealth is threatened by access to clean and free energy? Who has the desire to create a system where so few have so much, and so many have so little? It’s become extremely obvious, especially within the past few years, that Earth’s dependence on fossil fuels is not needed at all. Corporate media continues to push the idea that we are in an energy crisis, that we are approaching a severe problem due to a lack of resources. This seems to be both another fear tactic and another excuse to create conflict. This means that these systems could run for infinity and provide energy to the entire planet without burning fossil fuels. This would eliminate a large portion of the ‘bills’ you pay to live, and reduce the harmful effect we are having on Earth and her environment. These concepts have been proven in hundreds of laboratories all over the world, yet never see the light of day. Harold E.

Amsterdam pays alcoholics in beer to clean streets The imaginative approach to the problem of anti-social behaviour demonstrates typical Dutch pragmatism which could be found shocking in other countries, but not here. At nine o'clock in the morning in a garden shed behind a house in Amsterdam, a handful of alcoholics are getting ready to clean the surrounding streets, beer and cigarette in hand. For a day's work, the men receive 10 euros (around $13), a half-packet of rolling tobacco and, most importantly, five cans of beer: two to start the day, two at lunch and one for after work. "This group of chronic alcoholics was causing a nuisance in Amsterdam's Oosterpark: fights, noise, disagreeable comments to women," said Gerrie Holterman, who heads the Rainbow Foundation project, financed by the Dutch state and donations. "The aim is to keep them occupied, to get them doing something so they no longer cause trouble at the park," she told AFP. Frank says he has been jailed for violence, has never worked for anyone and has no fixed abode.

Man Builds Fairy Tale Home for His Family – Total Cost £3,000 | Green Architecture Simon Dale is a family man in Wales, the western part of Great Britain. His interest in self-sustainability and an ecological awareness led him to dig out and build his own home—one of the loveliest, warmest, most inviting dwellings you could ever imagine. And it cost him only £3,000, about $4,700 American dollars! Can you imagine a more charming entrance than this? Simon gives two reasons for building the home. It’s fun. His second reason is a plea for sustainability, in which he states that “our supplies are dwindling and our planet is in ecological catastrophe”. Simon is also a photographer, and as you can see throughout this article, a talented one. A beautiful view in another home that Simon is helping build for someone else. The tools are fairly simple. The home is constructed from wood, stone, straw, and has a sod roof. Most amazingly, the home didn’t require years of training or experience. He was fortunate in obtaining the land for his home. Sources: gaia-health