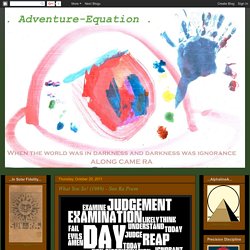 (1989) This today is a judgement day It is more likely, examination day. A ruler rules the judgement be This day to judge and examine Today is examination day Too long delayed but yet Are you too blind to the evils of non-discrimination That you dare not understand? Are you so willfully ignorant of what you should be; That you think you are only what others say you are, Yet perhaps you fail to realize That what you are you are And thus so. Thusly, if what you reap is what you so What you reap is what you are: Amen! Sun Ra - Detroit Black Journal. Detroit Black Journal - Sun Ra. Sun Ra Remembers How Musicians Used To Dress. Sun Ra - Best Answer on Music. Sun Ra 1974 Interview - Contemporary Art Presentation by Atlanta Artist Corey Barksdale.

SUN RA - Quotes and Poetry. Experiences with Sun Ra It was in the early 1980s when I got my first Sun Ra records. 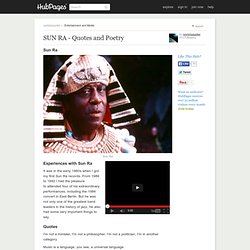 From 1986 to 1992 I had the pleasure to attended four of his extraordinary performances, including the 1986 concert in East Berlin. But he was not only one of the greatest band leaders in the history of jazz, he also had some very important things to say. Quotes I'm not a minister, I'm not a philosopher, I'm not a politician, I'm in another category. Music is a language, you see, a universal language. The world is in such a bad condition that if they don't find what you call a redeemer, every man, woman and child on this planet will be eliminated. Now, this sickness and this death and all these things that happen here on earth are not necessary. They don't know things and they're not trying to find out things except for money and sex and dope and religion and politics and all those things. I'm dealing with the potential of people.

It's totally wrong but people are self destruct. Interview with Sun Ra, November 2, 1988. Royal Stokes, W. - The Jazz Scene. an Informal History From New Orleans to 1990. Product: SUN RA. Composer, bandleader, pianist, poet and philosopher, Sun Ra is one of the most colourful and enduring of musical legacies, transcending time, place and cultural genres. 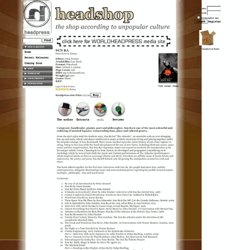 From the mid 1950s until his death in 1993, Sun Ra led "The Arkestra", an ensemble with an ever-changing line-up and name which sometimes numbered as many as thirty musicians living and playing together under the despotic tutelage of Sun Ra himself. Their music touched upon the entire history of jazz, from ragtime to swing, bebop to free jazz,while the band also pioneered the use of new forms, including electronic music, space music and free improvisation. But Sun Ra’s legendary status was earned as much for his eccentricities as for his unique artistic vision.

Claiming to be from Saturn, he developed and propagated a mystifying sci-fi mythology which he weaved into both the music and Dadaist performances of The Arkestra (performances which inspired artists as diverse as George Clinton and MC5). Sun Ra Research December 1, 1985 by Hinds Brothers. Web Sound. Sun Ra (1914-1993) Space Poetry Avant jazz, with plenty of offbeat and exotic touches, and some weird electronics too – but over the music, there's also vocals on every track – some recited by Ra himself, with a focus on his more poetic lyrics – some delivered by the enigmatic Yochanan, or vocalist Roy Stubbs. 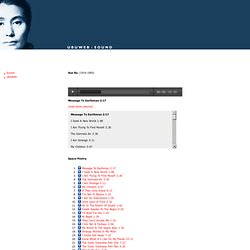 Tracks are shorter than usual Saturn album tracks – making us guess that some of these were intended for singles, although a number of cuts here are from unreleased tapes and rehearsals, too. Included here are two longer numbers with Ra telling these cool little stories over music, "I Gotta Get Away" and "Know What It's Like On My Planet" – both richly illustrated not only by the backings, but also by his vivid narration – surprisingly dramatic at times, with a bad-rapping feel that's almost funky! Also here are two versions of "The Outer Darkness" – one with a repeated text by Wisteria, over weird electric backings – the other with June Tyson over even wilder electronics!

Side A. Amiri Baraka on "This Planet Is Doomed: The Science Fiction Poetry of Sun Ra" Sun Ra - THE. Interviews - intergalacticresearch. Interviews and Conversations: Henry Dumas, 1966 Francis Davis, 1990 Sun Ra at Rehearsal, 1971 Documentaries: BBC's Songs from Saturn, 1997 Home These conversations are among the most important relics of Sun Ra, providing extended accounts of his teachings and cosmology. 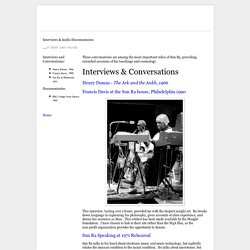 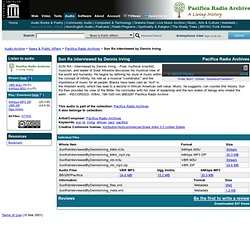 --'--> in-browser audio player requires JavaScript to be enabled. It appears your browser does not have it turned on. Please see your browser settings for this feature. </div> SUN RA / interviewed by Dennis Irving. - Poet, mythical scientist, musician, and leader of Solar Arkestra discusses his mystical view of the world and humanity. This audio is part of the collection: Pacifica Radio ArchivesIt also belongs to collection: "They Plan to Leave" - Sun Ra (recitation transcription) 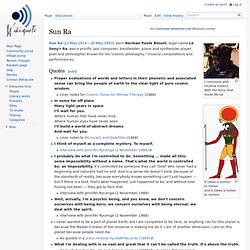 Quotes[edit] It takes a motion to notion and it takes a notion to motion. I probably do what I'm controlled to do. Something … made all this: some Impossibility without a name. Sun Ra - Interview + Live Toronto 1991.