Quiz asks users to select correct spelling to complete the sentence. Playbuzz has devised a test to determine your ability in the English language Users will be asked to select the correct spelling from a selection of three words Those who score 14 or above on the quiz are considered 'spelling masters' By Martha Cliff for MailOnline Published: 10:05 GMT, 29 December 2016 | Updated: 16:04 GMT, 29 December 2016. 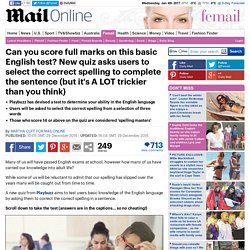 Academic versus Emotional Words in Writing - English Conversations. 10 words that sound rude but really, genuinely aren't. Ever wondered what a titbow is or a fanny-blower? 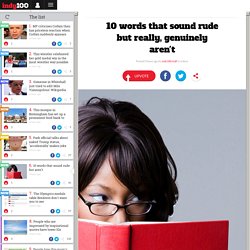 It's probably not what you think. The English language is full of words that sound rude - but actually aren't. Here's 10 of them, as compiled by Paul Anthony Jones of HaggardHawks fame. 1. cock-a-bendy 2. titbow 3. panshit 4. bumfiddlery 5. bumbailiff 6. butt-shaft 7. sexangle 8. skiddy-cock 9. assapanick 10. fanny-blower To find out what they mean, watch Jones' excellent video below. Proverbs and Idioms. 21 Digital Tools To Build Vocabulary - 21 Digital Tools To Build Vocabulary by Kimberly Tyson, Ph.D If you follow this blog, you know that I believe effective vocabulary instruction is just about the most important instructional activity for teachers to get right. 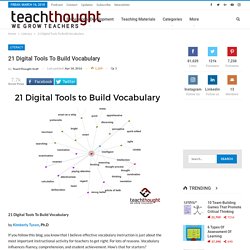 For lots of reasons. Vocabulary influences fluency, comprehension, and student achievement. How’s that for starters? In addition, a broad vocabulary is important for effective speaking, listening, reading and writing. I write frequently about the importance of effective vocabulary instruction and my recent infographic – the 10 Do’s and Don’ts of Effective Vocabulary Instruction – has proved very popular having been Pinned over 31,000 times. In today’s 21st century classrooms, digital tools must coexist alongside more traditional tools. Digital tools have advantages. The following digital tools show promise to support word learning, review, and playing with language. 21 Digital Tools to Build Vocabulary. 41 things Americans say wrong.

There are a number of theories that try to explain the reason Britons and Americans speak English so differently. 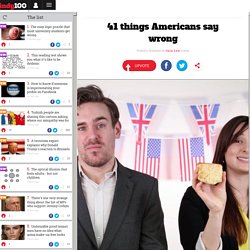 One such theory blames Noah Webster who, following independence, created the Webster Dictionary to reform the language in America. Expert Market created a video, below, which shows just how different the same language can sound with just a matter of distance. 41 things Americans say wrong. How Posh Is Your Vocabulary. The 58 most commonly misused words and phrases. Whether you're trying to sound sophisticated or simply repeating what you've heard, word fails are all too common and can make smart people sound dumb. 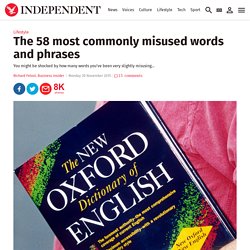 In his latest book, "The Sense of Style," Harvard cognitive scientist and linguist Steven Pinker explores the most common words and phrases that people stumble over. The book is like a modern version of Strunk and White's classic "The Elements of Style," but one based on linguistics and updated for the 21st century. Since there is no definitive body governing the rules of the English language like there is for the French language, for example, matters of style and grammar have always remained relatively debatable. Pinker's rules and preferences are no different, but the majority of the words and phrases he identifies are agreed upon and can help your writing and speaking.

We've highlighted the most common mistakes according to Pinker using examples directly from his book along with some of our own. ANIMAL KINGDOM images - Visual Dictionary Online. Visual Dictionary, Visual Thesaurus. “Descriptive” Words to Use Instead of VERY. 10 idioms that can't be translated. We use idioms to pepper our speech and writing, often without even realising we’re doing it. 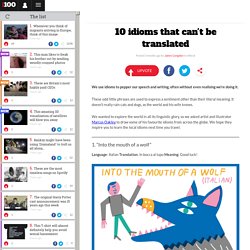 These odd little phrases are used to express a sentiment other than their literal meaning. It doesn’t really rain cats and dogs, as the world and his wife knows. We wanted to explore the world in all its linguistic glory, so we asked artist and illustrator Marcus Oakley to draw some of his favourite idioms from across the globe. We hope they inspire you to learn the local idioms next time you travel. Language: Italian Translation: In bocca al lupo Meaning: Good luck! 10 Awful Words and the People They're Named For. We all want to live forever. 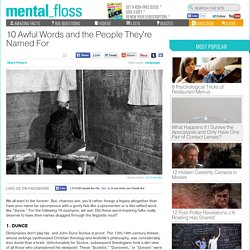 But, chances are, you'd rather forego a legacy altogether than have your name be synonymous with a goofy flub like a spoonerism or a dim-witted word like "dunce. " For the following 10 eponyms, we ask: Did these word-inspiring folks really deserve to have their names dragged through the linguistic mud? Dictionaries don't play fair, and John Duns Scotus is proof. The 13th/14th-century thinker, whose writings synthesized Christian theology and Aristotle's philosophy, was considerably less dumb than a brick. Unfortunately for Scotus, subsequent theologians took a dim view of all those who championed his viewpoint.

English Vocabulary. National Spelling Bee quiz: can you beat the past winners? 15 words you should eliminate from your vocabulary to sound smarter. Newsprint is on life support, emojis are multiplying faster than hungry Gremlins, and 300 million people worldwide strive to make their point in 140 or fewer characters. 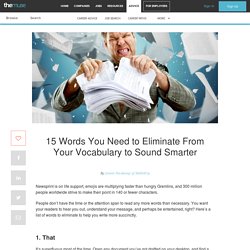 Tion Words. Using active, positive words (these are normally verbs) in a CV or in an application form can give it additional impact and make a stronger impression on potential employers. 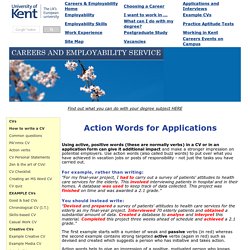 Expand your vocabulary - Knoword. Learn the collocations with have. Jason R. 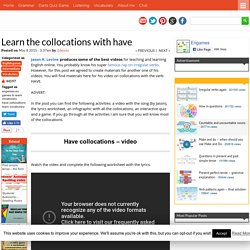 Levine produces some of the best videos for teaching and learning English online. You probably know his super famous rap on irregular verbs.