Word of the Year 2016 is... After much discussion, debate, and research, the Oxford Dictionaries Word of the Year 2016 is post-truth – an adjective defined as ‘relating to or denoting circumstances in which objective facts are less influential in shaping public opinion than appeals to emotion and personal belief’. 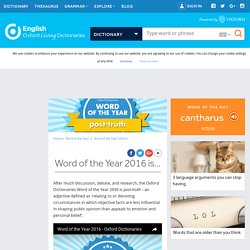 The script was provided by a guest writer, the cultural commentator Neil Midgley. Why was this chosen? The concept of post-truth has been in existence for the past decade, but Oxford Dictionaries has seen a spike in frequency this year in the context of the EU referendum in the United Kingdom and the presidential election in the United States. It has also become associated with a particular noun, in the phrase post-truth politics. Post-truth in 2016 Post-truth has gone from being a peripheral term to being a mainstay in political commentary, now often being used by major publications without the need for clarification or definition in their headlines. 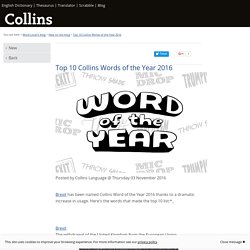 Here's the words that made the top 10 list:*_ BrexitThe withdrawal of the United Kingdom from the European Union HyggeA concept, originating in Denmark, of creating cosy and convivial atmospheres that promote wellbeing mic dropA theatrical gesture in which a person drops (or imitates the action of dropping) a hand-held microphone to the ground as the finale to a speech or performance Trumpism(1) the policies advocated by the US politician Donald Trump, especially those involving a rejection of the current political establishment and the vigorous pursuit of American national interests (2) a controversial or outrageous statement attributed to Donald Trump throw shadeTo make a public show of contempt for someone or something, often in a subtle or non-verbal manner sharentingThe habitual use of social media to share news, images, etc of one’s children. 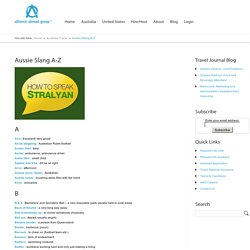 : Excellent! Very good! Aerial pingpong : Australian Rules footballAmber fluid : beerAmbo : ambulance, ambulance driverAnkle biter : small childApples, she’ll be : It’ll be all rightArvo : afternoonAussie (pron. Ozzie) : AustralianAussie salute : brushing away flies with the handAvos : avocados. Träna engelska glosor - Lanklearn™ The 50 most useful Idioms and their Meaning - A list on 1 page. Commonly used Idioms Idiom: a manner of speaking that is natural to native speakers of a language Every language has its own collection of wise sayings. 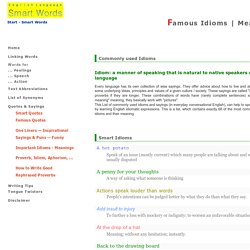 They offer advice about how to live and also transfer some underlying ideas, principles and values of a given culture / society. These sayings are called "idioms" - or proverbs if they are longer. These combinations of words have (rarely complete sentences) a "figurative meaning" meaning, they basically work with "pictures". Smart Idioms A hot potato Speak of an issue (mostly current) which many people are talking about and which is usually disputed A penny for your thoughts. Lingro: The coolest dictionary known to hombre! Visual dictionary. Dictionary, Encyclopedia and Thesaurus - The Free Dictionary. 28 August 2013: Oxford Dictionaries Online quarterly update: new words added to oxforddictionaries.com today. 28 August 2013, Oxford, UK Today Oxford University Press announces the latest quarterly update to OxfordDictionaries.com Online (ODO). 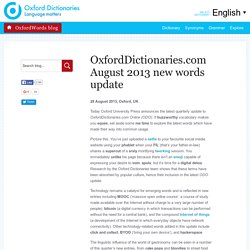 If buzzworthy vocabulary makes you squee, set aside some me time to explore the latest words which have made their way into common usage. Picture this. You’ve just uploaded a selfie to your favourite social media website using your phablet when your FIL (that’s your father-in-law) shares a supercut of a srsly mortifying twerking session. You immediately unlike his page because there isn’t an emoji capable of expressing your desire to vom: apols, but it’s time for a digital detox. The linguistic influence of the world of gastronomy can be seen in a number of this quarter’s new entries, from cake pops and blondies to street food and guac; it might be wise to wash that down with a pear cider or a michelada before you show signs of a food baby.