Tatvamasi - You Are That. Reached to : 4520 Citizens Shared: 1 Favorited: Tweets: Express below for the consciousness effected by this story/film... 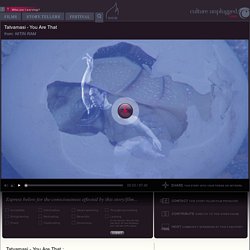 Contact This Story.Teller/Film.Producer Contribute Directly to this story/cause HOST Community Screening of This Film/Story Tatvamasi - You Are That : Director:B. Synopsis: The film narrates the brief life history of Shree Nisargadatta Maharaj & also the core teaching of Non-Duality (Advaita). Request DVD: You may purchase the DVD of this film directly from this StoryTeller/Producer. Embed this story : This Film cannot be embedded. Thank you for your presence and engagement with humanity - with our world! 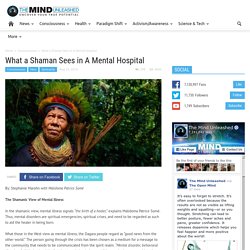 Thus, mental disorders are spiritual emergencies, spiritual crises, and need to be regarded as such to aid the healer in being born. What those in the West view as mental illness, the Dagara people regard as “good news from the other world.” The person going through the crisis has been chosen as a medium for a message to the community that needs to be communicated from the spirit realm. One of the things Dr.

“I was so shocked. Another way to say this, which may make more sense to the Western mind, is that we in the West are not trained in how to deal or even taught to acknowledge the existence of psychic phenomena, the spiritual world. On the mental ward, Dr Somé saw a lot of “beings” hanging around the patients, “entities” that are invisible to most people but that shamans and psychics are able to see. 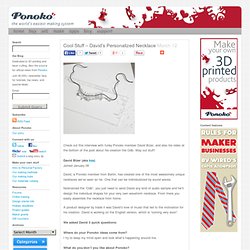 Way out stuff! David Bizer (aka bza) Joined January 08 David, a Ponoko member from Berlin, has created one of the most awesomely unique necklaces we’ve seen so far. One that can be individualized by sound waves. Nicknamed the “Odb”, you just need to send David any kind of audio sample and he’ll design the individual shapes for your very own waveform necklace. A product designer by trade it was David’s love of music that led to the motivation for his creation. Make your own stuff using: 3D Printing, Laser Cutting, CNC Routing. Living Cultural Storybases - Home. The Sound Advice Project, waveforms as bracelets - Boing Boing. Bookcubes. Bookcubes: Souvenirs of Digital Reading. I was recently asked by the good people at Proboscis to undertake a virtual residency, exploring their Bookleteer suite of tools. 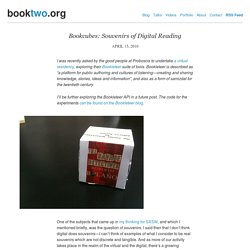 Bookleteer is described as “a platform for public authoring and cultures of listening—creating and sharing knowledge, stories, ideas and information”, and also as a form of samizdat for the twentieth century. I’ll be further exploring the Bookleteer API in a future post. The code for the experiments can be found on the Bookleteer blog. One of the subjects that came up in my thinking for SXSW, and which I mentioned briefly, was the question of souvenirs. I said then that I don’t think digital does souvenirs—I can’t think of examples of what I consider to be real souvenirs which are not discrete and tangible.

These records—souvenirs—are important because they serve as touchstones, aides memoires, and visual quantifiers. Russell Davies has written about “the way we use these little objects to say stuff about ourselves. [Photo by jørngeorg on Flickr]