Thinking the Way Animals Do 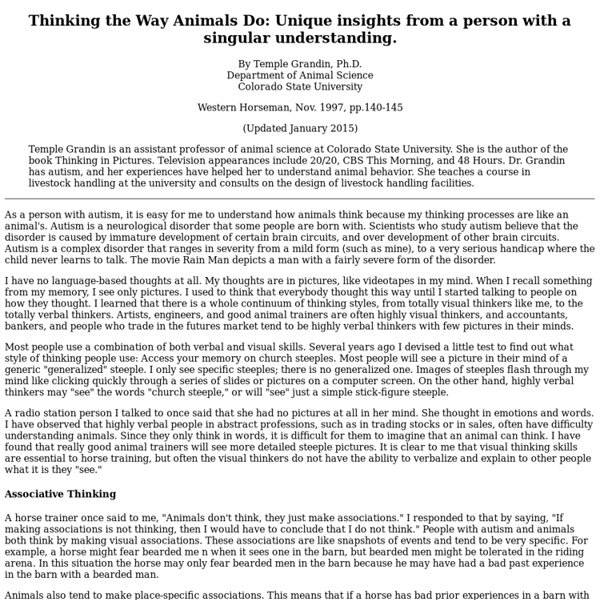 By Temple Grandin, Ph.D. Department of Animal Science Colorado State University Western Horseman, Nov. 1997, pp.140-145 (Updated January 2015) Temple Grandin is an assistant professor of animal science at Colorado State University. She is the author of the book Thinking in Pictures. As a person with autism, it is easy for me to understand how animals think because my thinking processes are like an animal's. I have no language-based thoughts at all. Most people use a combination of both verbal and visual skills. A radio station person I talked to once said that she had no pictures at all in her mind. Associative Thinking A horse trainer once said to me, "Animals don't think, they just make associations." Animals also tend to make place-specific associations. Years ago a scientist named N. Fear Is the Main Emotion Fear is the main emotion in autism and it is also the main emotion in prey animals such as horses and cattle. Fear-based behaviors are complex. Effects of Genetics Effects of Novelty

Donnie (dog) Donnie is a Doberman Pinscher dog who came to the attention of science due to his penchant for arranging his plush toys in geometric forms.[1] His owner rescued him from an animal shelter, and at first he was slow to learn, and very reluctant to interact socially with her.[2] He has appeared on the National Geographic Channel’s Dog Genius show.[1][3] On the show, he is shown arranging some of his 80 plush toys into evenly-spaced triangles and lines, and chooses to use, for example, only stuffed frogs or monkeys for a particular design.[4] He is shown creating his arrangements in his large yard in Maryland on remote video cameras without humans being present. He is even said to create social vignettes with the toys.[4][5] For example, the day after he first allowed his owner to put her arm around him, he placed a large bear with its arm around a smaller frog.[2][6] Dr. Pictures of Donnie and his compositions on University of Michigan website

How to Detect Lies - body language, reactions, speech patterns Interesting Info -> Lying Index -> How to Detect Lies Become a Human Lie Detector (Part 1) Warning: sometimes ignorance is bliss. After gaining this knowledge, you may be hurt when it is obvious that someone is lying to you. The following deception detection techniques are used by police, forensic psychologists, security experts and other investigators. Introduction to Detecting Lies: ACP - Cephalopods “Me Tarzan, you Jane.” If the male cuttlefish could speak, this might be his opening line. Although cuttlefish don’t primarily use sound to communicate, the male still has an opening line, and it might translate to the longer, but conceptually simpler, “Me Tarzan. You Tarzan? First Person Plural - Magazine An evolving approach to the science of pleasure suggests that each of us contains multiple selves—all with different desires, and all fighting for control. If this is right, the pursuit of happiness becomes even trickier. Can one self "bind" another self if the two want different things? Are you always better off when a Good Self wins? And should outsiders, such as employers and policy makers, get into the fray?

Do Dogs Speak Human? What's the Big Idea? Perhaps the better question is, do humans speak dog? Either way, the debate over whether language is unique to humans, or a faculty also possessed by wild and domestic animals from dogs to apes to dolphins, is an interesting one. The answer depends on exactly how we define "language," and who's doing the talking, says David Bellos, the Booker prize-winning translator.

Mental Heuristics Page A heuristic is a "rule-of-thumb", advice that helps an AI program or human think and act more efficiently by directing thinking in an useful direction. Some of these heuristics are age-old wisdom, bordering on cliche, but most are actually helpful. If you want something done, do it yourself Comment: Obviously true, and doing it is usually very good for your self esteem. A surprising amount of work can be done this way, and experts are not always necessary.

Researcher decodes prairie dog language, discovers they've been talking about us You might not think it to look at them, but prairie dogs and humans actually share an important commonality -- and it's not just their complex social structures, or their habit of standing up on two feet (aww, like people). As it turns out, prairie dogs actually have one of the most sophisticated forms of vocal communication in the natural world, really not so unlike our own. After more than 25 years of studying the calls of prairie dog in the field, one researcher managed to decode just what these animals are saying.

Home Page This wiki is a collaborative environment for exploring ways to become a better thinker. Topics that can be explored here include MemoryTechniques, MentalMath, CriticalThinking, BrainStorming, ShorthandSystems, NotebookSystems, and SmartDrugs. Other relevant topics are also welcome. Ravens have social abilities previously only seen in humans Humans and their primate cousins are well known for their intelligence and social abilities. You hear them called bird-brained, but birds have demonstrated a great deal of intelligence in many tasks. However, little is known about their social skills.

6 Random Things (Other Than Drugs) That Reduce Pain Your nearest drugstore is full of completely fake pain remedies, from shoe magnets to magical ground-up shark bones. But while these new age medicines are little more than placebos, science has found a whole lot of unexpected -- and downright weird -- ways you can control pain without ever swallowing a pill. Things like ... There is more to life than money. Money is the root of all evil.