The Intelligence of Games

Y3 Games - Free Online Games. Skynet meets the Swarm: how the Berkeley Overmind won the 2010 StarCraft AI competition. We’re gathered in a conference room on the Berkeley campus, the detritus of a LAN party scattered around us. 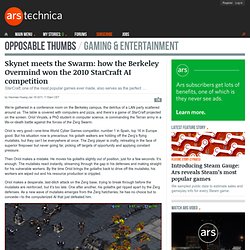 The table is covered with computers and pizza, and there’s a game of StarCraft projected on the screen. Oriol Vinyals, a PhD student in computer science, is commanding the Terran army in a life-or-death battle against the forces of the Zerg Swarm. Oriol is very good—one-time World Cyber Games competitor, number 1 in Spain, top 16 in Europe good. But his situation now is precarious: his goliath walkers are holding off the Zerg’s flying mutalisks, but they can’t be everywhere at once. The Zerg player is crafty, retreating in the face of superior firepower but never going far, picking off targets of opportunity and applying constant pressure.

Then Oriol makes a mistake. Oriol makes a desperate, last-ditch attack on the Zerg base, trying to break through before the mutalisks are reinforced, but it’s too late. There's a palpable air of celebration in the room; even Oriol is grinning. Arcen Games, LLC - AI War Features. "You are outgunned. 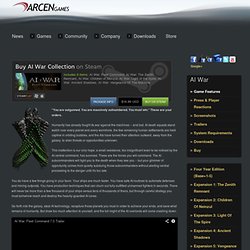 You are massively outnumbered. You must win. " These are your orders. Humanity has already fought its war against the machines -- and lost. AI death squads stand watch over every planet and every wormhole, the few remaining human settlements are held captive in orbiting bubbles, and the AIs have turned their attention outward, away from the galaxy, to alien threats or opportunities unknown. This inattention is our only hope: a small resistance, too insignificant even to be noticed by the AI central command, has survived.

You do have a few things going in your favor. Go forth into the galaxy, steal AI technology, recapture those planets you must in order to achieve your ends, and save what remains of humanity. So What Exactly Is This Game? AI War is a one-of-a-kind strategy game that plays like an RTS but feels like a 4X. More specifically, this is a game that you can either play solo, or in 2-8 player co-op. Why Would I Want This Game? Information For Strategy Newbies. Gamers beat algorithms at finding protein structures. Today's issue of Nature contains a paper with a rather unusual author list. 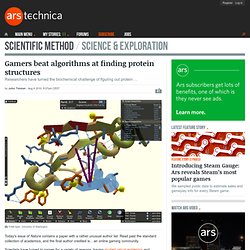 Read past the standard collection of academics, and the final author credited is... an online gaming community. Scientists have turned to games for a variety of reasons, having studied virtual epidemics and tracked online communities and behavior, or simply used games to drum up excitement for the science. But this may be the first time that the gamers played an active role in producing the results, having solved problems in protein structure through the Foldit game.

According to a news feature on Foldit, the project arose from an earlier distributed computing effort called Rosetta@home. That project used what has become the standard approach for home-based scientific work: a screensaver that provided a graphical frontend to a program that uses spare processor time to solve weighty scientific problems.

Duels of the Planeswalkers: All about AI. I! 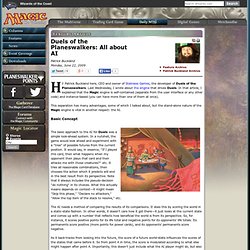 Patrick Buckland here, CEO and owner of Stainless Games, the developer of Duels of the Planeswalkers. Last Wednesday, I wrote about the engine that drives Duels. Smart Games. Toastyfrog.com: Compendium of Useless Information : Games - The. Games | The Difficulty of Difficulty Article by Kat? 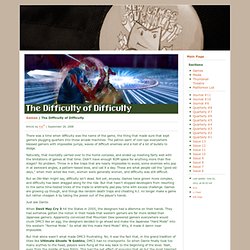 | September 29, 2008 There was a time when difficulty was the name of the game, the thing that made sure that kept gamers plugging quarters into those arcade machines. Zerg Build Order optimizer. A new blueprint for artificial general intelligence. (stock image) Demis Hassabis, a research fellow at the Gatsby Computational Neuroscience Unit, University College London, is out to create a radical new kind of artficial brain. 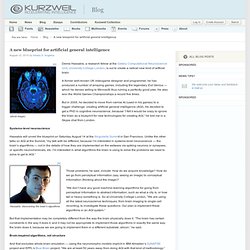 A former well-known UK videogame designer and programmer, he has produced a number of amazing games, including the legendary Evil Genius — which he denies selling to Microsoft, thus ruining a perfectly good joke. He also won the World Games Championships a record five times. But in 2005, he decided to move from narrow AI (used in his games) to a bigger challenge: creating artificial general intelligence (AGI). He decided to get a PhD in cognitive neuroscience, because “I felt it would be crazy to ignore the brain as a blueprint for new technologies for creating AGI,” he told me in a Skype chat from London. Systems-level neuroscience Hassabis will unveil the blueprint on Saturday August 14 at the Singularity Summit in San Francisco.