21 Strategies to Improve Emotional Intelligence. Here is a conspiracy theory for you – some very intelligent people are here amongst us. 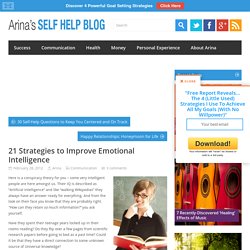 Their IQ is described as “Artificial Intelligence” and like “walking Wikipedias” they always have an answer ready for everything. And from the look on their face you know that they are probably right. “How can they retain so much information?” You ask yourself. Have they spent their teenage years locked up in their rooms reading? I do not know about you, but in the past an encounter with such highly intelligent people would always leave me feeling two contradictory emotions: excitement, because I have learned something new and a slight sense of inadequacy, because I have never felt an urge to read the “Wall Street Journal” or wrap my mind around “Schrödinger’s cat” paradox. It turns out that the latter emotion was unjustified, as recent studies in psychology confirm that our IQ has very little to do with accomplishing success in life. 21 Strategies to Improve Emotional Intelligence 1. 2. 3. 4. 5. 6.

Forbes Welcome. As the bestselling coauthor of Emotional Intelligence 2.0, I’m often asked to break down what emotional intelligence is and why it’s so important. 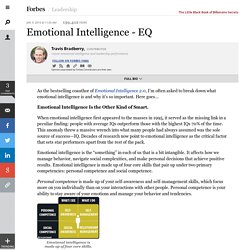 Here goes… Emotional Intelligence Is the Other Kind of Smart. When emotional intelligence first appeared to the masses in 1995, it served as the missing link in a peculiar finding: people with average IQs outperform those with the highest IQs 70% of the time. This anomaly threw a massive wrench into what many people had always assumed was the sole source of success—IQ. Decades of research now point to emotional intelligence as the critical factor that sets star performers apart from the rest of the pack. Emotional intelligence is the “something” in each of us that is a bit intangible. Personal competence is made up of your self-awareness and self-management skills, which focus more on you individually than on your interactions with other people. Emotional Intelligence, IQ, and Personality Are Different. Overcoming the EQ Deficit: Help for Aspergers Men.

While much of what I'm about to talk about applies to both men and women, this post is going to lean more toward addressing the male-version of Aspergers and High-Functioning Autism... 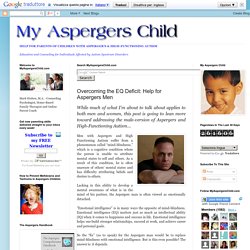 Men with Aspergers and High Functioning Autism suffer from a phenomenon called “mind-blindness,” which is a cognitive condition where the person is unable to attribute mental states to self and others. As a result of this condition, he is often unaware of others' mental states and has difficulty attributing beliefs and desires to others. Lacking in this ability to develop a mental awareness of what is in the mind of his partner, the Aspergers man is often viewed as emotionally detached. "Emotional intelligence" is in many ways the opposite of mind-blindness. Emotional intelligence (EQ) matters just as much as intellectual ability (IQ) when it comes to happiness and success in life. So the “fix” (so to speak) for the Aspergers man would be to replace mind-blindness with emotional intelligence. 1. Asperger’s Syndrome and Emotional Intelligence. This is the second in a series of articles designed to explore some of the issues and concerns that arise around what is currently called Asperger’s syndrome, which will soon be incorporated into the broader spectrum of autism disorder when the new Diagnostic and Statistical Manual of Mental Disorders (DSM-5) is published in 2013. 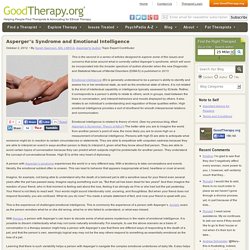 Emotional intelligence (EI) is generally understood to be a person’s ability to identify and assess his or her emotional state, as well as the emotional state of others. It is not related to the kind of intellectual capability or intelligence typically assessed by IQ tests. Rather, it corresponds to a person’s ability to relate to others, work in groups, read between the lines in conversation, and interpret behaviors and moods displayed by others. It also relates to an individual’s understanding and regulation of those qualities within. High emotional intelligence provides a sort of shorthand for smooth interpersonal relations and communication.

Emotional Intelligence and Resiliency in Young Adults With Asperger's Disorder: Challenges and Opportunities.