Kingdom (biology) Prefixes can be added so subkingdom and infrakingdom are the two ranks immediately below kingdom. 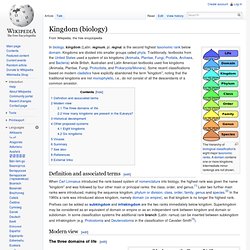 Superkingdom may be considered as an equivalent of domain or empire or as an independent rank between kingdom and domain or subdomain. In some classification systems the additional rank branch (Latin: ramus) can be inserted between subkingdom and infrakingdom (e.g. Protostomia and Deuterostomia in the classification of Cavalier-Smith[3]). From around the mid-1970s onwards, there was an increasing emphasis on comparisons of genes on the molecular level (initially ribosomal RNA genes) as the primary factor in classification; genetic similarity was stressed over outward appearances and behavior. Plant Cells Vs. Animal Cells. Animal & Plant Cells.

Protista Group: The "Catch-All Kingdom" By: Chris Alderman, Michelle Strathy, Katrina Cofield, and Stuart Edwards Introduction Protistans are eukaryotes. Micologists, fungi scientists, believe we have only identified 5% of the 1 million or more species of fungi. Inside the Cell. The Biology Project: Cell Biology. En español Cell Membranes Learn that membranes are fluid, with components that move, change, and perform vital physiological roles as they allow cells to communicate with each other and their environment. 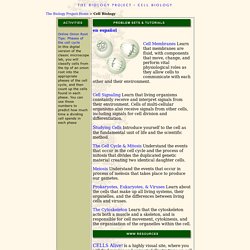 Cell Signaling Learn that living organisms constantly receive and interpret signals from their environment. Cells of multi-cellular organisms also receive signals from other cells, including signals for cell division and differentiation.

The Amazing and Not Always Known World of Microorganisms

From Single-Celled Protists to Multi-Cellular Fungi.