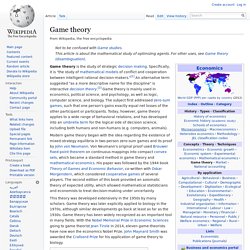 Specifically, it is "the study of mathematical models of conflict and cooperation between intelligent rational decision-makers. "[1] An alternative term suggested "as a more descriptive name for the discipline" is interactive decision theory.[2] Game theory is mainly used in economics, political science, and psychology, as well as logic, computer science, and biology. The subject first addressed zero-sum games, such that one person's gains exactly equal net losses of the other participant or participants.

Today, however, game theory applies to a wide range of behavioral relations, and has developed into an umbrella term for the logical side of decision science, including both humans and non-humans (e.g. computers, animals). Modern game theory began with the idea regarding the existence of mixed-strategy equilibria in two-person zero-sum games and its proof by John von Neumann. Representation of games[edit] Extensive form[edit] Tali Sharot: The optimism bias. 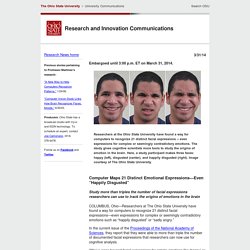 ET on March 31, 2014. Computer Maps 21 Distinct Emotional Expressions—Even “Happily Disgusted” Study more than triples the number of facial expressions researchers can use to track the origins of emotions in the brain COLUMBUS, Ohio—Researchers at The Ohio State University have found a way for computers to recognize 21 distinct facial expressions—even expressions for complex or seemingly contradictory emotions such as “happily disgusted” or “sadly angry.” In the current issue of the Proceedings of the National Academy of Sciences, they report that they were able to more than triple the number of documented facial expressions that researchers can now use for cognitive analysis. “We’ve gone beyond facial expressions for simple emotions like ‘happy’ or ‘sad.’ Since at least the time of Aristotle, scholars have tried to understand how and why our faces betray our feelings—from happy to sad, and the whole range of emotions beyond. 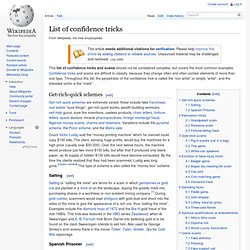 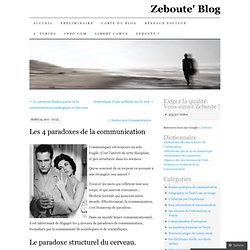 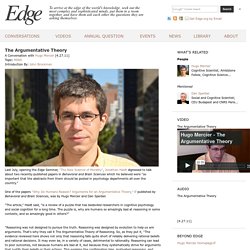 Reasoning was designed by evolution to help us win arguments. That's why they call it The Argumentative Theory of Reasoning. So, as they put it, "The evidence reviewed here shows not only that reasoning falls quite short of reliably delivering rational beliefs and rational decisions. It may even be, in a variety of cases, detrimental to rationality.

Reasoning can lead to poor outcomes, not because humans are bad at it, but because they systematically strive for arguments that justify their beliefs or their actions. "Now, the authors point out that we can and do re-use our reasoning abilities.