What the CIA can teach your business about information gathering on Twitter. Spying….. sounds sneaky, doesn’t it? 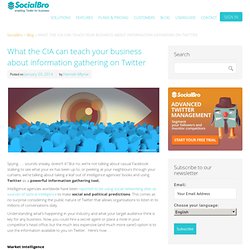 But no, we’re not talking about casual Facebook stalking to see what your ex has been up to, or peeking at your neighbours through your curtains, we’re talking about taking a leaf out of intelligence agencies’ books and using Twitter as a powerful information gathering tool. Intelligence agencies worldwide have been reported to be using social networking sites as sources of tactical intelligence to make social and political predictions. This comes as no surprise considering the public nature of Twitter that allows organisations to listen in to millions of conversations daily. Understanding what’s happening in your industry and what your target audience think is key for any business. Now, you could hire a secret agent or place a mole in your competitor’s head office, but the much less expensive (and much more sane!) Gather Competitive Intelligence on Your Competition. One fast way to hamstring your small business is to ignore your competition. 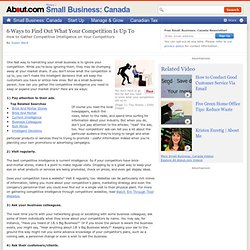 While you're busy ignoring them, they may be chomping away at your market share. If you don't know what the competition is up to, you can't make the intelligent decisions that will keep the customers you have or entice new ones. How to Gather and Organize Valuable Competitive Intelligence Information. Without good information, the organization can have no information advantage in its search for competitive intelligence, but what constitutes good information? 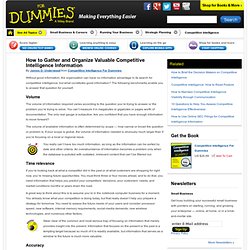 The following benchmarks enable you to answer that question for yourself. Volume The volume of information required varies according to the question you’re trying to answer or the problem you’re trying to solve. You can’t measure it in megabytes or gigabytes or pages worth of documentation. The only real gauge is subjective: Are you confident that you have enough information to move forward? The volume of available information is often determined by scope — how narrow or broad the question or problem is. You really can’t have too much information, as long as the information can be sorted by date and other criteria.

Time relevance If you’re looking back at what a competitor did in the past or at what customers are shopping for right now, you’re missing future opportunities. Accuracy Not all information is relevant or even accurate. Gathering intelligence on the recruitment and use of informers. Stories about the controversial use of informers have hit the headlines recently, with the planting of police officers in environmental groups causing serious embarrassment when it was found they'd had relationships and fathered children with activists. 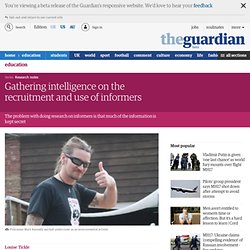 Reports of MI5 repeatedly approaching people assumed to be Muslims at UK airports with inducements to inform on their friends and neighbours have also been disastrous for community relations. The dislike – hatred even – people feel for telltales reflects the trauma that is felt when trust is broken, says Dr Steve Hewitt, senior lecturer in the department of American and Canadian studies at the University of Birmingham, and author of Snitch! A History of the Modern Intelligence Informer. When it's a matter of deeply felt belief, the trauma is magnified. "It involves betrayal, and it's a very powerful emotion, whereas technology used for surveillance is impersonal," he says. Information Gathering in Intelligence Agencies. US spy leaks: How intelligence is gathered. 17 January 2014Last updated at 05:01 ET Documents leaked by whistleblower Edward Snowden suggest the US government has undertaken mass surveillance operations across the globe - including eavesdropping on US allies. 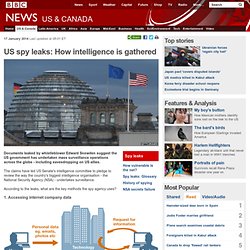 Intelligence Gathering Techniques. By Stephen Northcutt Chapter 8 from Network Intrusion Detection: An Analyst's Handbook, published by New Riders Publishing In Chapter 3,"Architectural Issues," we raised the issue that CIRTs have to focus primarily on compromised systems. 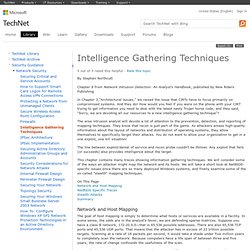 And they do! How would you feel if you were on the phone with your CIRT trying to get information you need to deal with the latest nasty Trojan horse code, and they said, "Sorry, we are devoting all our resources to a new intelligence gathering technique"? The wise intrusion analyst will devote a lot of attention to the prevention, detection, and reporting of mapping techniques. The line between exploit/denial of service and recon probe couldn't be thinner. This chapter contains many traces showing information gathering techniques. Intelligence Techniques. Secrecy and Protection The Committee of Secret Correspondence insisted that matters pertaining to the funding and instruction of intelligence agents be held within the Committee. 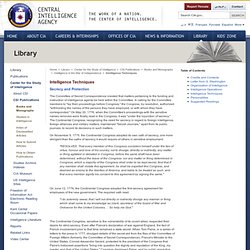 In calling for the Committee members to "lay their proceedings before Congress," the Congress, by resolution, authorized "withholding the names of the persons they have employed, or with whom they have corresponded. " On May 20, 1776, when the Committee's proceedings-with the sensitive names removed-were finally read in the Congress, it was "under the injunction of secrecy. " The Continental Congress, recognizing the need for secrecy in regard to foreign intelligence, foreign alliances and military matters, maintained "Secret Journals," apart from its public journals, to record its decisions in such matters.

On November 9, 1775. the Continental Congress adopted its own oath of secrecy, one more stringent than the oaths of secrecy it would require of others in sensitive employment: Cover Disguise Secret Writing Dr. How to run your own NSA spy program. Opinion June 22, 2013 07:01 AM ET Computerworld - Everybody's talking about PRISM, the U.S. government's electronic surveillance program. 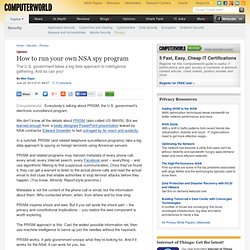 We don't know all the details about PRISM (also called US-984XN). But we learned enough from a badly designed PowerPoint presentation leaked by NSA contractor Edward Snowden to feel outraged by its reach and audacity. In a nutshell, PRISM (and related telephone surveillance programs) take a big data approach to spying on foreign terrorists using American servers. Www.unodc.org/documents/human-trafficking/Toolkit-files/08-58296_tool_5-12.pdf.

A Private Detective's Approach to Intelligence Gathering. In today’s information age, the clichéd old-school private detective has dropped their fedora and library card and turned to the Internet and investigative databases to gather intelligence. 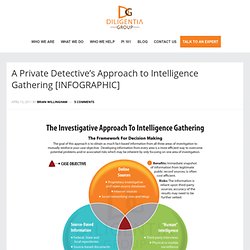 Although this approach has tremendous value for its speed, cost effectiveness and ability to broadly search a wide variety of records, relying on the Internet and database records has exposed inconsistent and erroneous information. We have found the most effective and thorough way to gather intelligence is to utilize a multi-pronged investigative approach. The key to this investigative approach is to identify mutually supporting information from various disparate sources to gather a more accurate, comprehensive and complete picture. Three-Pronged Approach As noted in the diagram above (printable version), we utilize three distinct approaches to gather information: List of intelligence gathering disciplines. Intelligence Gathering Disciplines HUMINT [ edit ] Human Intelligence—gathered from a person on the ground. 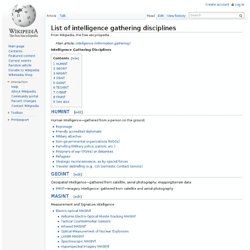