The Last. Why Do You Love Me? This award-winning video about the ugly truth of dating is delightfully beautiful. 10 Signs an Introvert Likes You. How To Choose A Partner Wisely. Why, how & when to Flirt. The Problem with Over-Friendly People. Why We Go Off People Who Like Us. He went through the hardest breakup of his life... and this award-winning video is what he created. Life Inside Islamic State. Skateboarding on Frozen Sand 4K. China: A Skier's Journey. She & Him - Why Do You Let Me Stay Here? Zooey Deschanel & Joseph Gordon-Levitt performance.

AFTERMATH. That One Day - Miu Miu Women Tales. I'd Love For You To See Me Dance. The Buddhist. Nissan "Shoulders of Giants" Secret Handshake. Waiting for summer. My beautiful girls. MYYRA - All About You. The Sandman. Laura : A portrait of an artist - Documentary. The Lovers. Night work - 1.4. Paris-based Kendy Ty writes, shoots and edits short films in his spare time on zero budget. 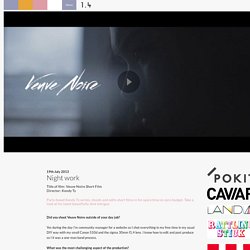 Take a look at his latest beautifully shot intrigue Did you shoot Veuve Noire outside of your day job? Yes during the day I’m community manager for a website so I shot everything in my free time in my usual DIY way with my small Canon 550d and the sigma 30mm f1.4 lens. I know how to edit and post produce so I it was a one-man band process.

What was the most challenging aspect of the production? The most challenging aspect of this project was that as usual I made it with 0 euro budget. What prompted you to make this particular film? I’d been doing a lot of documentaries recently and wanted to return to making a narrative short film. And how did you evolve the idea? The initial idea of the plot was about a girl who kills people randomly. See earlier 1.4 interview with Kendy. Night work - 1.4. "Home" - Directors Cut. This Eerily Beautiful Dystopian Short Film, Shot by Chris Doyle, Will Leave You Wanting More. In the past two years, I have written about quite a few cinematographers. 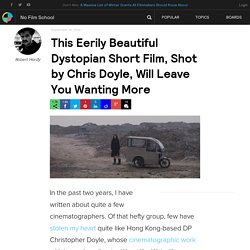 Of that hefty group, few have stolen my heart quite like Hong Kong-based DP Christopher Doyle, whose cinematographic work with legendary director Wong Kar Wai will go down as some of the best in history. A new Doyle-shot short film just so happens to be making its way around the web, and, as you might expect, it looks absolutely fantastic. The film is called The Sand Storm.

A Girl Wants to Die.A Guy Wants to Love. How Much Is Your Girlfriend? LET US ROAM - Atiba Jefferson. JCP ANTHEM (Dir. cut) This Hilarious Video Mocks The Bizarre Liberalism In Schools - "Too Shy" Student Short Film (2011) Text Me - An Award-Winning Short Love Story. The Burning Bush. DARKLIGHT - 4K Full Film by Sweetgrass Productions. THE SAUSAGE DESTROYER. THE WORLD'S BEST SANDWICH. This Delectable Doc Series on Gourmet Sandwiches Reminds Us to Follow Our Passions. You may remember Roberto Serrini from his stylish short doc about a motorcycle mechanic who hates motorcycles. 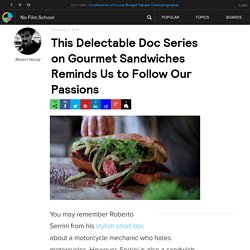 However, Serrini is also a sandwich fiend on a quest to find and document the world's best sandwiches. In honor of National Sandwich Day -- yes, it's a real thing, look it up -- we're sharing the no-budget web series boldly titled Make Me a Sandwich, which was brought into existence by Serrini and producer/world-renowned chef Jeremy Spector. The pair set out to find NYC's best chefs and have them craft their idea of the perfect sandwich. What they came up with might very well be some of the most mouthwatering sandwich-based documentary content ever produced. Check out a few of the the most delicious episodes below: And finally, the world's greatest sandwich: You might be asking yourself why this series is showing up on No Film School. Watch: Tarantino-esque 'Moto Borgotaro' Breaks the Biographical Short Doc Mold.

It turns out that not all biographical short docs these days are exactly alike. 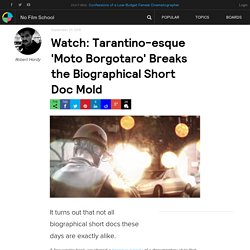 A few weeks back, we shared a hilarious parody of a documentary style that has become all too common in today's internet culture. The style consists of plentiful voiceover, often soft and contemplative, slow motion shots of a subject as they take on mundane tasks, copious amounts of silhouetting, backlighting, and shallow depth of field, all of which is topped off with an emotive, atmospheric soundtrack. Of course, these filmmaking techniques are fine in and of themselves, as they can all be effective. However, when they're all used together, and when seemingly everybody is doing it to some extent, our content all starts to look and sound the same. One of the questions that arose after that piece was published was, "Is anybody out there crafting biographical work that defies convention and raises a middle finger towards the clichéd style of today's short docs? " Peter and his bike are anything but typical. KNIVES. Adam Newport-Berra's 'Greenwood' Will Make Your Eyes & Ears Happy.

In the hustle and bustle of today's film world, it's rare to find a piece that so rigorously carves out space for quiet contemplation. 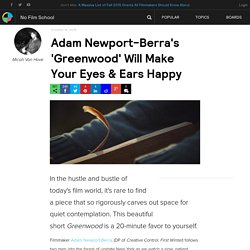 This beautiful short Greenwood is a 20-minute favor to yourself. Filmmaker Adam Newport-Berra, (DP of Creative Control, First Winter) follows two men into the forest of upstate New York as we watch a slow, patient process unfold before our eyes. I got to chat with Adam about narrative vs. documentary coverage, the pros and cons of directing and DPing simultaneously and the dangers of feeling comfortable on set. I think the hardest thing for our generation to do is find some sort of stillness. NFS: This piece is really calming and graceful and just made my whole day better when I watched it. Adam: It was shot in this place called Beaver Book, which is 2½ hours outside the city. NFS: In a documentary style setting where you can only do things once, how did you decide what to cover?