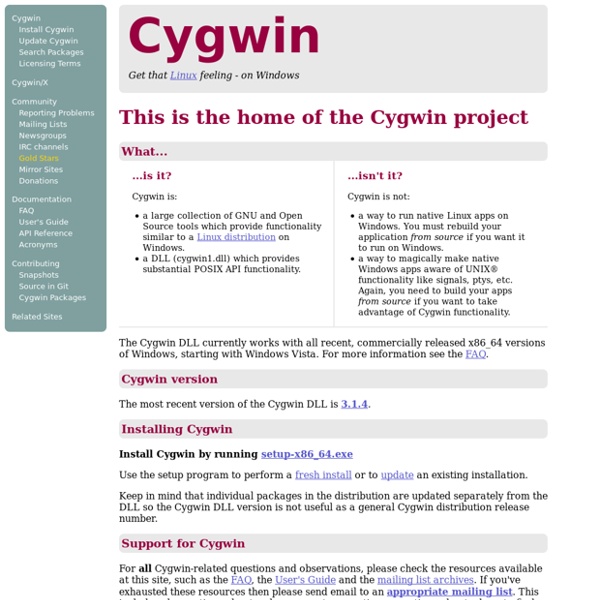 Tour When you decided who is responsible for the task, select him/her in the assign to field. So that he/she can check the task in the Inbox. If selected Nobody, you can still find it in your From Me box. PuTTY Download Page Home | FAQ | Feedback | Licence | Updates | Mirrors | Keys | Links | Team Download: Stable · Snapshot | Docs | Changes | Wishlist PuTTY is a free implementation of SSH and Telnet for Windows and Unix platforms, along with an xterm terminal emulator. It is written and maintained primarily by Simon Tatham. The latest version is 0.70. Download it here. LEGAL WARNING: Use of PuTTY, PSCP, PSFTP and Plink is illegal in countries where encryption is outlawed. Hadoop Tutorial home | Cloud Types | Related Technologies What is Hadoop? Miha Ahronovitz, Ahrono & Associates Kuldip Pabla, Ahrono & Associates

Thunderbird - Software made to make email easier Thunderbird is a free email application that's easy to set up and customize - and it's loaded with great features! Release Notes - Other Systems and Languages Why you want a Linux Live CD For the most part, on this blog, I try to convince readers to do something defensive on their computers - like a parent nagging a child to eat their vegetables. Only once have I put my foot down, so to speak, saying unequivocally last year that all Windows XP users should employ DropMyRights. Now, another emphatic endorsement - all Windows users should have a Linux Live CD, and, know how to use it. If you're not familiar with the term "Live" applied to a CD, that's because it's not something that exists in the Windows world.

Cassandra vs MongoDB vs CouchDB vs Redis vs Riak vs HBase comparison (Yes it's a long title, since people kept asking me to write about this and that too :) I do when it has a point.) While SQL databases are insanely useful tools, their monopoly in the last decades is coming to an end. And it's just time: I can't even count the things that were forced into relational databases, but never really fitted them. (That being said, relational databases will always be the best for the stuff that has relations.) But, the differences between NoSQL databases are much bigger than ever was between one SQL database and another. This means that it is a bigger responsibility on software architects to choose the appropriate one for a project right at the beginning.

GetCache - A Chrome plugin to view cached version of the current page - Sadique Ali Download the plugin here On numerous occasions, I have ran in to the situation where I had to look up how to load Google’s cached version of a particular page. This happens often when I follow a link from Hacker News or Reddit to a blog post and the blog has went down due to the great avalanche of traffic from HN and Reddit. After struggling to remember and having to Google how to get the cached version, I decided to finally solve this issue. Checksum software Overview: Arpoon Checksum computes checksums of files. A checksum (message digest, hash value) is a kind of fingerprint that enables to uniquely identify a file or document. This can be used for authentication purposes or to track document modifications. By way of example, this tool can be utilized to: uniquely identify a given file, thus using the checksum as a fingerprint. survey a file i.e. to check if a file as been modified by comparing its actual checksum with a previously archived value. look for possible duplicate of files by scanning hardware storage devices (hard disk, DVD, CD, memory sticks...) verify the authenticity i.e. genuineness of a fingerprinted document that has been sent to you (e.g. as an EMail attachment or by way of a download) by comparing its on-the-fly computed checksum with its (publicly available) stored fingerprint.