Everything You Can Ask Cortana to Do in Windows 10. Best Free Drive Backup programs for Windows. Computer hard drives and other storage devices will fail eventually. 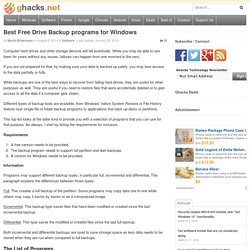 While you may be able to use them for years without any issues, failures can happen from one moment to the next. If you are not prepared for that, by making sure your data is backed up safely, you may lose access to the data partially or fully. While backups are one of the best ways to recover from failing hard drives, they are useful for other purposes as well. They are useful if you need to restore files that were accidentally deleted or to gain access to all the data if a computer gets stolen. Different types of backup tools are available, from Windows' native System Restore or File History feature over single-file or folder backup programs to applications that back up disks or partitions. This top list looks at the latter kind to provide you with a selection of programs that you can use for that purpose. Requirements Information Full: This creates a full backup of the partition.

Acronis True Image WD Edition Clonezilla. Back to Basics: Learn to Use Keyboard Shortcuts Like a Ninja. Cnet. Windows 10 has had some issues with display scaling on high-resolution screens -- you may have noticed that some of your legacy apps on Windows 10 have (or had -- they've been slowly fixing this) minuscule user interfaces, with icons and text so tiny you can barely see them, let alone click them. 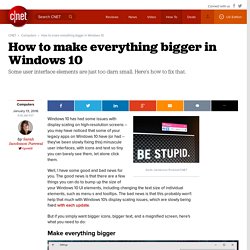 Well, I have some good and bad news for you. The good news is that there are a few things you can do to bump up the size of your Windows 10 UI elements, including changing the text size of individual elements, such as menu s and tooltips. The bad news is that this probably won't help that much with Windows 10's display scaling issues, which are slowly being fixed with each update. But if you simply want bigger icons, bigger text, and a magnified screen, here's what you need to do: Make everything bigger You can change the size of everything in the user interface -- including icons, text, and apps -- from the Settings menu by scaling the display. Only the text Magnify your screen. 16 Quick Shortcuts to Work Faster in Windows. The best Windows 10 keyboard shortcuts.

The Only Safe Place to Buy a Windows PC is the Microsoft Store. Lenovo’s been shipping Superfish on their PCs for months. 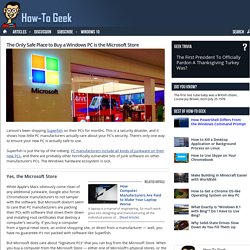 This is a security disaster, and it shows how little PC manufacturers actually care about your PC’s security. There’s only one way to ensure your new PC is actually safe to use. Superfish is just the tip of the iceberg. PC manufacturers include all kinds of junkware on their new PCs, and there are probably other horrifically vulnerable bits of junk software on other manufacturer’s PCs. The Windows hardware ecosystem is sick. Yes, the Microsoft Store While Apple’s Macs obviously come clean of any additional junkware, Google also forces Chromebook manufacturers to not tamper with the software. But Microsoft does care about “Signature PCs” that you can buy from the Microsoft Store.

So, if you want a safe Windows PC, buy it from the Microsoft Store. No, we’re not bought and paid for by Microsoft. Or You Could Reinstall Windows, But… You could also just reinstall Windows on your new PC, too. Windows 10 Privacy Settings: How to stop Windows 10 from spying on you. The verdict is in: people love Windows 10. 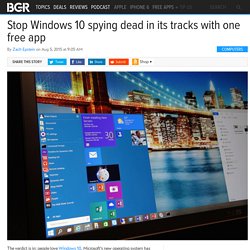 Microsoft’s new operating system has been a hit with the tech press and users alike, with millions of people around the world singing the new software praise. Yes, anything is better than Windows 8, but Windows 10 isn’t just “better than Windows 8,” it really is a terrific piece of software that dials back Microsoft’s earlier missteps and encourages productivity. Of course, nothing is perfect and Windows 10 has a few issues. Beyond the bugs — here are some common Windows 10 problems and how to fix them — Microsoft’s Windows 10 software has some features that can certainly be considered an invasion of privacy, and they’re enabled by default. 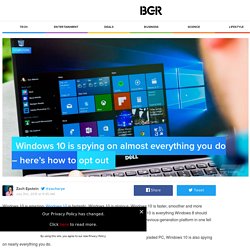