Adding “Run as Administrator” to a Registration File Context Menu. If you are trying to merge a registration file in Windows Vista that has non-HKEY_CURRENT_USERS entries from a Standard User Account then the merge will probably fail because the registration file wants to write to system wide registry settings such as HKEY_LOCAL_MACHINE and HKEY_CLASSES_ROOT, for example. 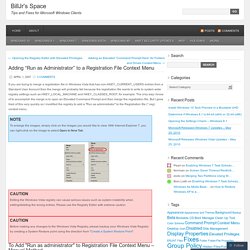 The only way I know of to accomplish the merge is to open an Elevated Command Prompt and then merge the registration file. But I grew tried of this very quickly so I modified the registry to add a "Run as administrator" to the Registration file (*.reg) context menu. To enlarge the images, simply click on the images you would like to view. With Internet Explorer 7, you can right-click on the image to select Open in New Tab.

Editing the Windows Vista registry can cause serious issues such as system instability when editing/deleting the wrong entries. Uac - Have Windows "Run" dialog run as Admin? Completely FREE Software - Windows & DOS freeware. Bootdisk.Com. Windows Server content from Windows IT Pro. Why does logon take so long? 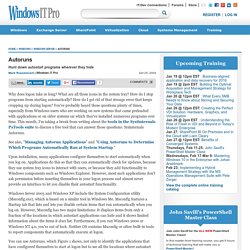 What are all those icons in the system tray? How do I stop programs from starting automatically? How do I get rid of that strange error that keeps cropping up during logon? You've probably heard these questions plenty of times, especially from Windows users who are working on new systems that came preloaded with applications or on older systems on which they've installed numerous programs over time. This month, I'm taking a break from writing about the tools in the Systinternals PsTools suite to discuss a free tool that can answer those questions: Sysinternals Autoruns. See also, "Managing Autorun Applications" and "Using Autoruns to Determine Which Programs Automatically Run at System Startup.

" Upon installation, many applications configure themselves to start automatically when you log on. Windows Server 2003 and Windows XP include the System Configuration utility (Msconfig.exe), which is based on a similar tool in Windows Me. What You See Where They Hide. Fix “File In Use” Deletion Errors On Network Drives by Disabling Windows Thumbnail Generation.

Even though both Windows and its users have made the jump to the 21st century, there’s still some lingering 1990s-era annoyances hiding out in the OS including Windows’ tenacious desire to create thumbnail files (and then refusing to delete them). 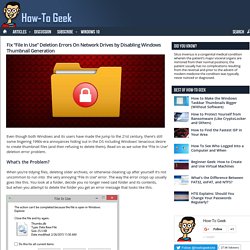 Read on as we solve the “File In Use” deletion error problem. What’s the Problem? When you’re tidying files, deleting older archives, or otherwise cleaning up after yourself it’s not uncommon to run into the very annoying “File In Use” error. The way the error crops up usually goes like this. You look at a folder, decide you no longer need said folder and its contents, but when you attempt to delete the folder you get an error message that looks like this. Windows will happily delete the contents of the folder but it won’t delete the folder and the “Thumbs.db” file will persist.

Windows has a very sensible policy that prevents the deletion of files currently in use by the operating system or an application. Fixing the Error. Improve Microsoft Office 2013 Performance by Disabling Unnecessary Animations. Most of us are enjoying the recently released free Customer Preview version of Microsoft Office 2013 (codename Office 15). 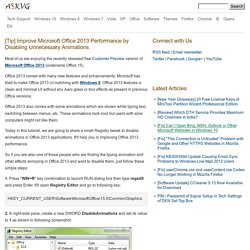 Office 2013 comes with many new features and enhancements. Microsoft has tried to make Office 2013 UI matching with Windows 8. Office 2013 features a clean and minimal UI without any Aero glass or blur effects as present in previous Office versions. Office 2013 also comes with some animations which are shown while typing text, switching between menus, etc. These animations look cool but users with slow computers might not like them. Today in this tutorial, we are going to share a small Registry tweak to disable animations in Office 2013 applications. So if you are also one of those people who are finding the typing animation and other effects annoying in Office 2013 and want to disable them, just follow these simple steps: 1. 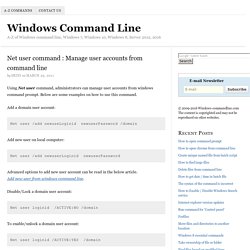