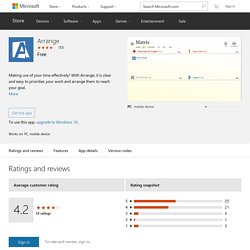 Not only does it ask specifically for this large amount of personal information it states "at any time". There is NO reason for a task manager to need such a wide approval at any time it wants. Never will I risk it. Other apps offer the same styles of organizers for free without invading my privacy and those of my contacts. Also, there are advertisements on "Arrange" where other free apps don't include ads. More. Taskorami – Windows Apps on Microsoft Store. This is one of those apps I didn't realize I needed until I had it, then I wondered where it had been all my life. 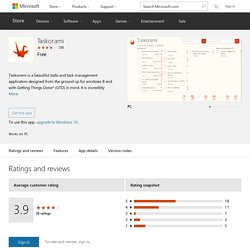 The interface is crisp and clean, and overall it's an extremely good GTD app. There are some features missing - it needs a mobile version, it needs outlook integration, it needs to be able to rearrange tasks or transition a task into a project. But the developer is active, some of those feature are already in the works (I'll update when they come out), and what is here works exactly like it should work - which gives me a good deal of confidence that the app will continue to evolve. And the ability to sync between Windows 8 devices if, like me, you run multiple Windows 8 machines, works wonderfully. More. Productivity Burst – Windows Apps on Microsoft Store. The app crashes when my laptop's display turns off, which kinda sucks because I would like to conserve my battery AND have the timer running correctly, not just have one or the other. 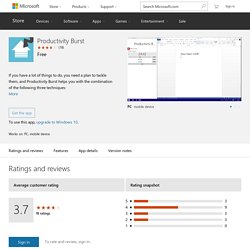 Other than that, I like using the app! The chain burst function is pretty nice, since I do like keeping track of my daily progress (speaking of which, the app allows for tasks to be daily! Hooray!). If I had to be really picky, I would have to say that the desktop app's appearance might have to be cleaned up a little... It's kind of plain and doesn't seem to... fit...? Evernote Touch – Windows Apps on Microsoft Store. Don't Trust the 5 Star reviews, they are ALL written by "Unknown", which in the industry means the Evernote PR team and employees are posting positive reviews to try and drown out the flood of negative reviews since this app came out. 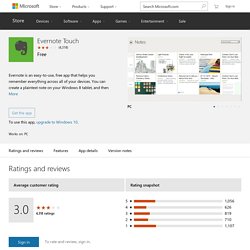 I have been using Evernote for years and never had a problem between different devices (from MacBook, iPhone, iPad, Windows Tablet, Desktop PC) but now since updating to Windows 10, Evernote is the most useless app. No Search ability in the actual notes, the results of any search are just the note that the info is in, but you need to search through note line by line to try and find searched string, making it a waste of an app right off and to make matters worse, no copy/paste, so basically I would be better off with a notepad and a pen, because that is the gist of this new app, nothing but a picture of the info you need with no ability to quickly find or copy the information.

More. Plex – Windows Apps on Microsoft Store. If you're a PlexPass subscriber, this is a great app for Windows users. 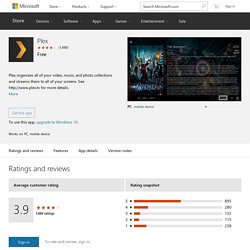