Microsoft Offers a Workaround for Windows 10 Build 9879 Update Issue. I promise you that someday I will stop writing about Windows 10 build 9879. 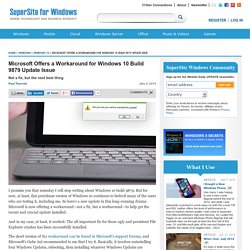 But for now, at least, this prerelease version of Windows 10 continues to bedevil many of the users who are testing it, including me. So here's a new update in this long-running drama: Microsoft is now offering a workaround—not a fix, but a workaround—to help get the recent and crucial update installed. And in my case, at least, it worked: The all-important fix for those ugly and persistent File Explorer crashes has been successfully installed. The short version of the workaround can be found in Microsoft's support forums, and Microsoft's Gabe Aul recommended to me that I try it.

Basically, it involves uninstalling four Windows Updates, rebooting, then installing whatever Windows Updates are subsequently offered, and then rebooting again. You may be wondering how to uninstall Windows Updates, and as I discovered, Microsoft still hasn't added a way to do so in the PC Settings interface. KB3020114 Fails to Install. Exact same issue here. 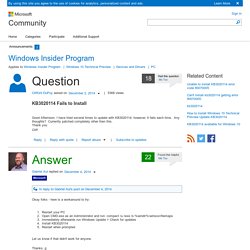 I've attempted to install the update 4 times. Each time, it appears to succeed. The update process during the reboot looks normal. Windows Update even shows "No updates available" when I first open it. But clicking "Check for updates" shows KB3020114 again, and my update history shows that the previous installation failed. I searched for the installation file to run it manually, but couldn't find a download anywhere. I wiped out my SoftwareDistribution folder as detailed here and tried again. 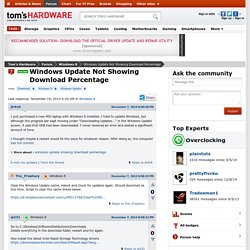 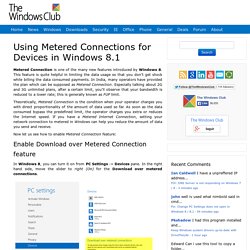 This feature is quite helpful in limiting the data usage so that you don’t get shock while billing the data consumed payments. In India, many operators have provided the plan which can be supposed as Metered Connection. Especially talking about 2G and 3G unlimited plans, after a certain limit, you’ll observe that your bandwidth is reduced to a lower rate; this is generally known as FUP limit. Theoretically, Metered Connection is the condition when your operator charges you with direct proportionality of the amount of data used so far. As soon as the data consumed bypass the predefined limit, the operator charges you extra or reduces the Internet speed. Now let us see how to enable Metered Connection feature: Enable Download over Metered Connection feature In Windows 8, you can turn it on from PC Settings -> Devices pane. How to Restrict & Monitor Mobile Data Usage on Windows 8.1.

Windows 8.1 allows you to limit and monitor data usage, which isn’t just useful if you have a Windows tablet or laptop with mobile data. 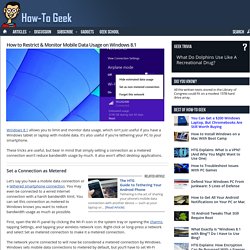 It’s also useful if you’re tethering your PC to your smartphone. These tricks are useful, but bear in mind that simply setting a connection as a metered connection won’t reduce bandwidth usage by much. It also won’t affect desktop applications. Set a Connection as Metered Let’s say you have a mobile data connection or a tethered smartphone connection. First, open the Wi-Fi panel by clicking the Wi-Fi icon in the system tray or opening the charms, tapping Settings, and tapping your wireless network icon. The network you’re connected to will now be considered a metered connection by Windows. Note that this option doesn’t do much on its own. Track Data Usage To track the bandwidth you’ve used on a network, right-click or long-press it in the same pane and select Show estimated data usage. Hyperlink.