Windows 10: Unable to Connect to Samba Shares » schkerke.com. In Build 9926 of Windows 10 Microsoft removed the ability to connect to unsecured network shares by default. 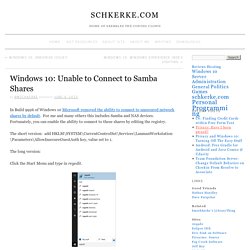 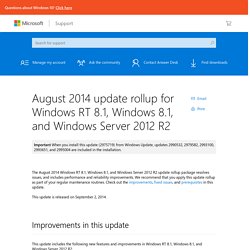 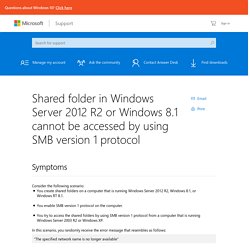 You enable SMB version 1 protocol on the computer. You try to access the shared folders by using SMB version 1 protocol from a computer that is running Windows Server 2003 R2 or Windows XP. In this scenario, you randomly receive the error message that resembles as follows: "The specified network name is no longer available" This issue occurs because there is a race condition between SMB version 1 Service driver loading and the Server service initialization. Fix for - Cannot access NAS Drives, \\Share\Folder is not accessible or "Error code: 0x80070035 The network path was not found" Subject Cannot access NAS Drives Cannot access network attached storage. 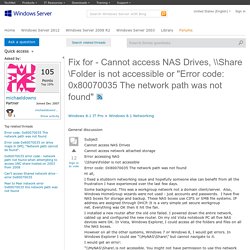 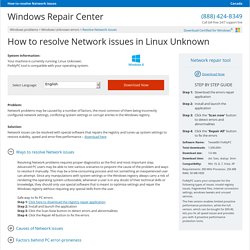 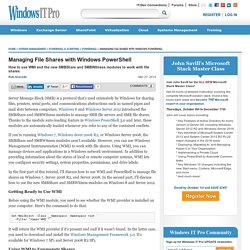 Windows 8 and Windows Server 2012 introduced the SMBShare and SMBWitness modules to manage SMB file servers and SMB file shares. Thanks to the module auto-loading feature in Windows PowerShell 3.0 and later, these modules are automatically loaded whenever you refer to any of the contained cmdlets. If you're running Windows 7, Windows Sever 2008 R2, or Windows Server 2008, the SMBShare and SMBWitness modules aren't available. However, you can use Windows Management Instrumentation (WMI) to work with file shares. Network mapped drives not available on WIndows 10 TP. Hi Rajesh, Thank you so much for posting a reply to this topic. 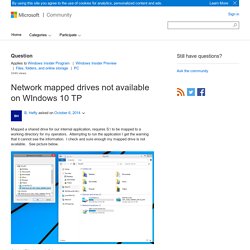 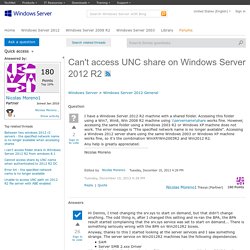