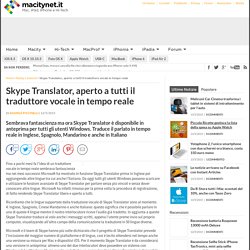 Free ebooks from Microsoft Press. Mando sur Twitter : "#Microsoft reveal tool to enable 'modern meetings' with #SkypeForBusiness at #MSIgnite. Microsoft announces Skype for Business at Ignite conference in Chicago. This week sees the first Microsoft Ignite Conference in Chicago, covering many of the companies technologies and services, including SharePoint and Office 365. 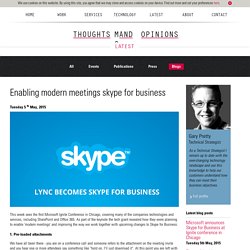 As part of the keynote the tech giant revealed how they were planning to enable 'modern meetings' and improving the way we work together with upcoming changes to Skype for Business. 1. Pre-loaded attachments We have all been there - you are on a conference call and someone refers to the attachment on the meeting invite and you hear one or more attendees say something like "hold on, I'll just download it". At this point you are left with an un-productive silence whilst everyone downloads the files before you can continue with the meeting. 2. At Mando, we have been waxing lyrical about the benefits of co-authoring in platforms such as SharePoint for a long time now and with the upcoming changes to Skype for Business, it gets even better. 3. 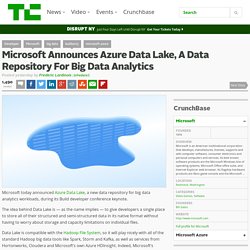 The idea behind Data Lake is — as the name implies — to give developers a single place to store all of their structured and semi-structured data in its native format without having to worry about storage and capacity limitations on individual files. Data Lake is compatible with the Hadoop File System, so it will play nicely with all of the standard Hadoop big data tools like Spark, Storm and Kafka, as well as services from Hortonworks, Cloudera and Microsoft’s own Azure HDInsight. Indeed, Microsoft’s corporate vice president for its data platform T.K.

“Ranga” Rengarajan described this as an “important commitment to the Hadoop ecosystem” when I talked to him about today’s announcements earlier this week. “We’re living in the golden age of data,” Rengarajan told me. The service is now in private preview and interested developers can sign up here. New Office 365 features appease the cloud-wary.

To overcome emotional barriers to cloud computing, cloud providers often give customers complete control over their data, including encryption keys. 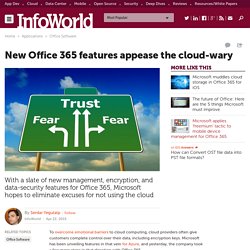 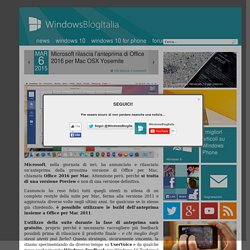 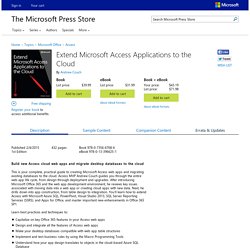 Access MVP Andrew Couch guides you through the entire web app life cycle, from design through deployment and upgrades. After introducing Microsoft Office 365 and the web app development environment, he reviews key issues associated with moving data into a web app or creating cloud apps with new data. Learn best practices and techniques to: Visual Studio sur Twitter : "Is #Microsoft serious about supporting #opensource on #Azure? You bet! Find out more, on 3/3. Azure and Open Source: What You Need to Know. Microsoft svilupperà applicazioni universali anche per Xbox One. WinBuzzer sur Twitter : "If You’re A Dropbox User, You Can Get 100GB Free OneDrive Storage: Here’s How #microsoft. If You're A Dropbox User, You Can Get 100GB Free OneDrive Storage: Here's How - WinBuzzer. In a bid to entice consumers to shift to OneDrive, Microsoft is offering existing Dropbox users free 100GB storage space for a year on the company's own cloud storage service. 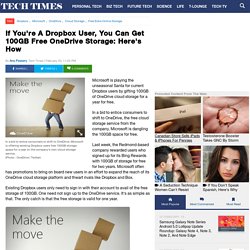 (Photo : OneDrive | Twitter) Microsoft is playing the unseasonal Santa for current Dropbox users by gifting 100GB of OneDrive cloud storage for a year for free. In a bid to entice consumers to shift to OneDrive, the free cloud storage service from the company, Microsoft is dangling the 100GB space for free. Blogs. Wow. 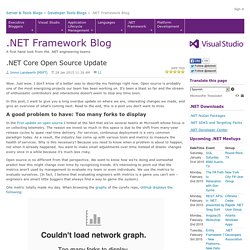 Just wow. I don’t know of a better way to describe my feelings right now. Open source is probably one of the most energizing projects our team has been working on. It’s been a blast so far and the stream of enthusiastic contributors and interactions doesn’t seem to stop any time soon. In this post, I want to give you a long overdue update on where we are, interesting changes we made, and give an overview of what’s coming next. In the first update on open source I hinted at the fact that we’ve several teams at Microsoft whose focus is on collecting telemetry. Open source is no different from that perspective. One metric totally made my day. How to receive alert notifications and manage alert rules in Azure - Curah! Home page - Windows Insider Program. Windows 10: The Next Chapter. Today I had the honor of sharing new information about Windows 10, the new generation of Windows. 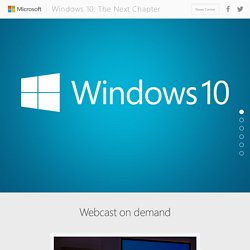 Our team shared more Windows 10 experiences and how Windows 10 will inspire new scenarios across the broadest range of devices, from big screens to small screens to no screens at all. You can catch the video on-demand presentation here. Windows 10 is the first step to an era of more personal computing. This vision framed our work on Windows 10, where we are moving Windows from its heritage of enabling a single device – the PC – to a world that is more mobile, natural and grounded in trust.

We believe your experiences should be mobile – not just your devices. Microsoft presenta Xbox App per Windows 10, streaming tra console e PC - hdblog.it. Ignite - Why Ignite. Your organization needs you to keep up with the latest technologies and innovations. 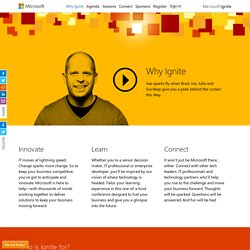 At Microsoft Ignite, you’ll dive deep into the areas that matter to you and learn best practices from leaders who have seen it all and conquered the impossible. With hundreds of sessions and technology partners present, you can thoroughly customize your learning experience. Discover best practices from IT professionals, test drive the latest tech, and connect with peers from around the globe. Nokia Lumia 735 - Opinione - Venti giorni con Lumia 735 Verde. Microsoft Italia sur Twitter : "Auguri dal Team #Microsoft! :)... Witter / ? Movie Creator Beta. Microsoft announces support for Docker container virtualization for next version of Windows Server. Paper: Citrix Virtual Desktop Handbook 7.x October 16th, 2014 Based on the recent releases of Citrix XenApp and XenDesktop 7.6, Citrix has updated its design guidance called the "Citrix Virtual Desktop Handbook 7.x".

Microsoft brevetta un nuovo elemento per la UI di Windows Phone - Tutto Windows Phone. Microsoft Surface Pro 3 annunciato ufficialmente: caratteristiche, immagini - Tutto Windows Phone. All-in-One Media Keyboard. Episode 136: WS-Federation and Microsoft OWIN Components with Vittorio Bertocci. WinPhone 8.1: sul mobile ora Microsoft fa sul serio. Cortana-yes-and-many-many-other-great-features-coming-in-windows-phone-8-1. Whew, what a day! What a week! I’ve just gotten off the stage at Build in front of 5,000 of our beloved developers talking about the future of the Windows platform. And now I’m here to tell YOU about the stuff we’ve been working on to delight all our Windows Phone users and fans! During my time on stage, I went over what’s next for Windows PCs, tablets, and phones with two major updates: Windows Phone 8.1 and the Windows 8.1 Update.

Both releases bring a lot of new features for consumers and businesses alike, built from the feedback we’ve heard from customers along the way. Pietro1861 : Tutto pronto per il #Microsoft... Pietro1861 : Tutto pronto per il #Microsoft... Dev Camp Windows 8, Windows Phone e Windows Azure – FIRENZE. Microsoft. One of the big surprises for me this year at CES 2014 was the new product lineup from MakerBot. I went to the MakerBot press event thinking I would see a new 3D printer announcement, but there were three new 3D printers unveiled: the Replicator Mini, the Replicator, and the Replicator Z18.

Microsoft makes company statistics interesting with the new "By The Numbers" website. Microsoft has launched a brand new website to show off some figures about the company. If you've ever felt like knowing exactly how many minutes are accumulated through Skype calls (hint: 2 billion), this new resource is the perfect way of finding out, as well as figures and details for other Microsoft products and services. It's essentially a portfolio highlighting the company's success, but what about the losses and products that haven't taken off?

Billed as "a collection of visual statistics about Microsoft products and services," the website sports a beautiful Windows 8 interface and visitors can select each tile to learn more and even check out services or products that the tile covers. Microsoft dominates Gamescom hall - Handy Tips. Gamescom the European E3 kicks of in Germany later this month and over 600 companies will be exhibiting the latest in computer and video game hardware and software.

The finalised maps of the three main halls have been released with the console manufacturers and the biggest publishers in Halle 5.2. Microsoft has reserved the most floorspace, it has two adjacent stands. Ubisoft, Nintendo, Take 2 and Sony will also have large exhibitor stands. Gamescom takes place in Cologne Germany from 21st to the 25th August. The 21st is a press only day with the doors opening to the public on the 22nd offering gamers the chance to get their first look at the Xbox One and PlayStation 4 consoles. On the 20th Sony and EA will each host a pre-Gamescom press conference that will be broadcast on the internet. Microsoftitalia : #‎MicrosoftStory: l'evoluzione... Blogs. Partnering in a New World. Channel 9: Videos about the people building Microsoft Products & Services. Free eBook: Microsoft Office 365: Connect and Collaborate Virtually Anywhere, Anytime - Microsoft Press.