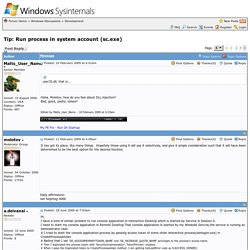 Some starting notes: You really don't need to bother with the SE_INCREASE_QUOTA_NAME privilege since it should effect the impersonation or create process.Infact, just to be sure, I just did a test and removed (not disabled, totally removed it from my process' token) the SE_INCREASE_QUOTA_NAME privilege, and it still works fine. (I am using XP SP3, so I cannot say for 100% if that is the same for vista) The only token privilege you need to ensure that your token has is SE_ASSIGNPRIMARYTOKEN_NAME. Infact you dont even need to have this privilege enabled, becuse if it is just disabled, and your token does have it, then CreateProcessAsUser will automatically enable it for us. Tip: Run process in system account (sc.exe) - Sysinternals Forums - Page 4. Login script - Running a process at the Windows 7 Welcome Screen. Login script - Running a process at the Windows 7 Welcome Screen. Configure pGina Windows 7 OpenLDAP Authentication. pGina Local Machine Plugin Documentation.

Plugin Name: Local Machine Plugin Type: Authentication, Authorization, Gateway Latest Version: 3.0.1.0 How it Works The local machine plugin manages authentication and authorization for accounts that exist on the machine itself.

It also is responsible for creating local accounts (possibly temporary ones) when a user is authorized to log in, but does not have a local account. Much of the functionality provided by this plugin was formerly part of the core in pGina 2.x and earlier. The local machine plugin can execute in any or all of the three main pGina stages (authentication, authorization, and gateway). Authentication Stage In the authentication stage, the local machine plugin attempts to authenticate the user’s credentials against an existing local account. It can be configured to always attempt to authenticate, or to only do so if the user has not already been authenticated by a plugin that was executed earlier within this stage. Authorization Stage Gateway Stage Local Groups Configuration.

Priede.bf.lu.lv/ftp/pub/Service_Pack/Windows/pGina/vecie/manual.pdf. Any user can unlock now with this custom GINA. Aucun is a replacement GINA that wraps Microsoft's own MSGINA.DLL to allow any given group of users to unlock or force logoff a locked session on a Windows machine, unless the currently loggon on user is a member of a group you specify. 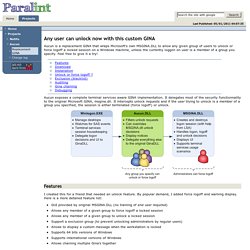 Feel free to give it a try! Aucun exposes a complete terminal services aware GINA implementation. It delegates most of the security functionnality to the original Microsoft GINA, msgina.dll. It intercepts unlock requests and if the user trying to unlock is a member of a group you specified, the session is either terminated (force logoff) or unlock. Features I created this for a friend that needed an unlock feature. If you need a feature that Aucun doesn't provide, send me an email. send me an email. Windows XP SP2 and Windows Server 2003 supported only (32 or 64 bits) Microsoft Vista: ICredentialProvider - ms-vista.todaysummary.com. C++ - ICredentialProvider.

Along the way, you’ll be introduced to the primary concepts and tools behind pGina plugin development. Tools Minimally, you’ll need the following: Visual Studio 2010 (or later) .NET 4.0 framework (usually installed along with VS 2010). Download the pGina source code The first step is to download the pGina source code. Setting up Visual Studio. pGina - Open source Windows authentication. Open source Windows authentication. About pGina pGina was originally written by Nate Yocom. pGina is currently primarily developed and maintained by David Wolff and Nate Yocom. 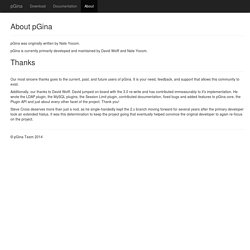 Thanks Our most sincere thanks goes to the current, past, and future users of pGina. It is your need, feedback, and support that allows this community to exist. .net - Windows Credential Provider with C# C++ - Certificate based login. Custom Login Experiences: Credential Providers in Windows Vista. New information has been added to this article since publication. 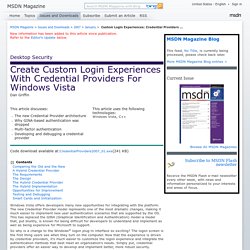 Refer to the Editor's Update below. Desktop Security Create Custom Login Experiences With Credential Providers For Windows Vista Dan Griffin Code download available at:CredentialProviders2007_01.exe(241 KB) Windows Vista offers developers many new opportunities for integrating with the platform. So why is a change to the Windows® logon plug-in interface so exciting? Comparing the Old and the New I don't want to go into too much detail about the GINA-based logon architecture. In a pre-Windows Vista™ environment, every session has an instance of winlogon, which is responsible for driving the interactive logon sequence for that session. Figure 1 GINA Logon Architecture The registered GINA on the machine is loaded into the winlogon process space. In Windows Vista, session zero is never used for interactive logon (see Figure 2). Figure 2 New Logon Architecture So how is per-provider user prompting behavior achieved in the new model? 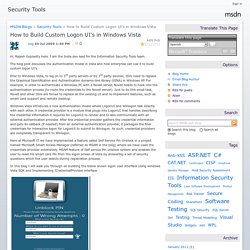 I am the India dev lead for the Information Security Tools team. The blog post discusses the authentication model in Vista and how enterprise can use it to build custom logon UI’s. Prior to Windows Vista, to log on to 3rd party servers or by 3rd party devices, ISVs need to replace the Graphical Identification and Authentication dynamic-link library (GINA) in Windows XP.

For example, in order to authenticate a Windows PC with a Novell server, Novell needs to hook into the authentication process (to route the credentials to the Novell server). Just to do this small task, Novell and other ISVs are forced to replace all the existing UI and re-implement features, such as smart card support and remote desktop. Windows Vista introduces a new authentication model where LogonUI and Winlogon talk directly with each other. The CPP class (Reffered as MSAMSSPinUnblockProvider in the below code) implements ICredentialProvider. .net - Add winlogon login method using C# and YubiKey.