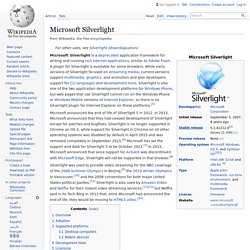 MICROSOFT has confirmed that its new Edge browser, set to debut officially in four weeks' time as part of Windows 10, will not have support for Silverlight. 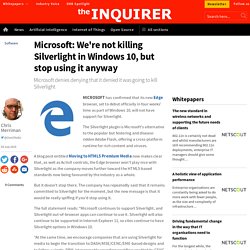 The Silverlight plugin is Microsoft's alternative to the popular but festering and disease-ridden Adobe Flash, offering a cross-platform runtime for rich content and viruses. A blog post entitled Moving to HTML5 Premium Media now makes clear that, as well as ActivX controls, the Edge browser won't play nice with Silverlight as the company moves further toward the HTML5-based standards now being favoured by the industry as a whole. But it doesn't stop there. The company has repeatedly said that it remains committed to Silverlight for the moment, but the new message is that it would be really spiffing if you'd stop using it. Moving to HTML5 Premium Media. The commercial media industry is undergoing a major transition as content providers move away from proprietary web plug-in based delivery mechanisms (such as Flash or Silverlight), and replace them with unified plug-in free video players that are based on HTML5 specifications and commercial media encoding capabilities. 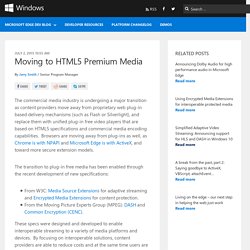 Browsers are moving away from plug-ins as well, as Chrome is with NPAPI and Microsoft Edge is with ActiveX, and toward more secure extension models. The transition to plug-in free media has been enabled through the recent development of new specifications: From W3C: Media Source Extensions for adaptive streaming and Encrypted Media Extensions for content protection.From the Moving Picture Experts Group (MPEG): DASH and Common Encryption (CENC).

These specs were designed and developed to enable interoperable streaming to a variety of media platforms and devices. This is a long blog, and we don’t want you to miss a topic that interests you. How to replace Flash and Silverlight with HTML5. In the last year, Microsoft has significantly backed off of their Silverlight strategy for Web developers. 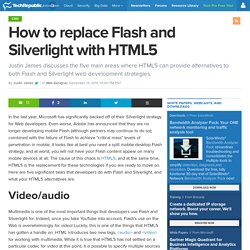 Even worse, Adobe has announced that they are no longer developing mobile Flash (although partners may continue to do so); combined with the failure of Flash to achieve "critical mass" levels of penetration in mobile, it looks like at best you need a split mobile-desktop Flash strategy, and at worst, you will not have your Flash content appear on many mobile devices at all. The cause of this chaos is HTML5, and at the same time, HTML5 is the replacement for these technologies if you are ready to move on. Here are five significant tasks that developers do with Flash and Silverlight, and what your HTML5 alternatives are. Multimedia is one of the most important things that developers use Flash and Silverlight for. Indeed, once you take YouTube into account, Flash's use on the Web is overwhelmingly for video!

Microsoft: Stop using Microsoft Silverlight. (Everyone else has) Microsoft is encouraging companies that use its Silverlight media format on their web pages to dump the tech in favor of newer, HTML5-based media playback systems. 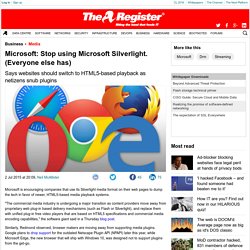 "The commercial media industry is undergoing a major transition as content providers move away from proprietary web plug-in based delivery mechanisms (such as Flash or Silverlight), and replace them with unified plug-in free video players that are based on HTML5 specifications and commercial media encoding capabilities," the software giant said in a Thursday blog post.

Similarly, Redmond observed, browser makers are moving away from supporting media plugins. Google plans to drop support for the outdated Netscape Plugin API (NPAPI) later this year, while Microsoft Edge, the new browser that will ship with Windows 10, was designed not to support plugins from the get-go. Why Browser Plug-Ins Are Going Away and What’s Replacing Them. Browser plug-ins are on their way out. 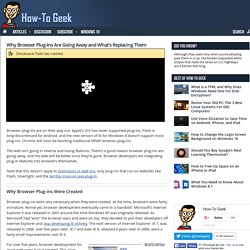 Apple’s iOS has never supported plug-ins, Flash is long-discontinued for Android, and the new version of IE for Windows 8 doesn’t support most plug-ins. Chrome will soon be blocking traditional NPAPI browser plug-ins. The web isn’t going in reverse and losing features. There’s a good reason browser plug-ins are going away, and the web will be better once they’re gone. Client Side Applications (Web Programming)