Chrono Perambulator Full Version. How to Turn On System Restore in Windows 10 to Protect Against Bad Windows Updates. When people came to know about the forced updates policy of Microsoft, people were worried sick about their metered data connections. 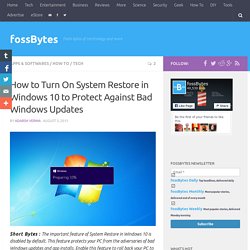 We have already discussed the topic with our readers that in Windows 10 Home version, you can’t disable Windows updates. Apart from the metered data connections, another risk associated with forced updates is that of bad updates PC. If you’ve upgraded your PC to Windows 10, you would be surprised to notice that one of the important features of any Windows OS, System Restore, may not be active.

This feature creates restore points before changes like new app installs, or Windows update. So, this helps you to go back to the previous state of the OS if things didn’t turn out to be as expected. Also read: How to Stop Windows 10 From Spying on You Some of you might be seeing this feature enabled after Windows 10 upgrade. System Retore in Windows 10 could be found in the Control Panel and it’s the heart of any Windows operating system.

Windows 10: Most Important Features You Need to Know. Windows 10 was the major feature of the event. 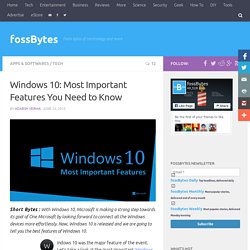 Let’s take a look at the most important Windows 10 features and related to Microsoft’s OS: Our complete Windows 10 guide is here: Windows 10 guide Return of the Start Menu: Microsoft tried hard to make a single operating system for desktop PCs and touch devices with Windows 8, but the absence of the classic start menu wasn’t welcomed. With Windows 10, Microsoft has brought the start menu back. As I’ve written in earlier posts, Microsoft has designed a special feature called Continuum for the convertible devices.

Cortana meets PC: Microsoft has brought the power of voice search assistance to the Desktop. Cortana can be used via voice queries or text. Edge Browser is a reality: Brand-new Microsoft Edge has arrived on PCs along with Windows 10. As I’ve written in earlier posts, Edge has some of the most advanced features ever for a web browser. Cloud is more prominent with OneDrive: Must Read: Our complete Windows 10 coverage. Xbox meets PC: Windows 10 can disable pirated games and unauthorised hardware. According to the Microsoft’s new Services Terms effective August 1st, Microsoft can stop you from using unauthorized hardware or from playing counterfeit games. 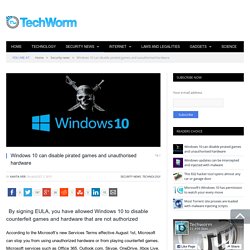 Microsoft services such as Office 365, Outlook.com, Skype, OneDrive, Xbox Live, MSN, and Bing are also covered by the new services terms. The terms are also applicable to software using a Microsoft account, which would mean that it would also have an effect on most Windows 10 users. Majority of the users use Microsoft’s latest OS with an account from the Redmond company, even though when they have an option to use it without an account. Microsoft now clearly states in the terms that the updates released could have some serious effects. In the terms, the company states it might, “download software updates or configuration changes, including those that prevent you from accessing the Services, playing counterfeit games, or using unauthorized hardware peripheral devices.” Non Windows 10 users could fall prey to these new terms. TCPView for Windows.

Introduction TCPView is a Windows program that will show you detailed listings of all TCP and UDP endpoints on your system, including the local and remote addresses and state of TCP connections. 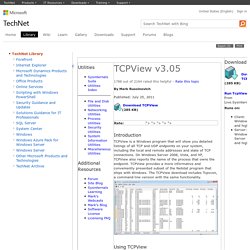 On Windows Server 2008, Vista, and XP, TCPView also reports the name of the process that owns the endpoint. TCPView provides a more informative and conveniently presented subset of the Netstat program that ships with Windows. The TCPView download includes Tcpvcon, a command-line version with the same functionality. Using TCPView When you start TCPView it will enumerate all active TCP and UDP endpoints, resolving all IP addresses to their domain name versions. By default, TCPView updates every second, but you can use the Options|Refresh Rate menu item to change the rate. You can close established TCP/IP connections (those labeled with a state of ESTABLISHED) by selecting File|Close Connections, or by right-clicking on a connection and choosing Close Connections from the resulting context menu.