Professional - Laplink® Software. Important PCmover should only be used as intended and as described in the User Guide. 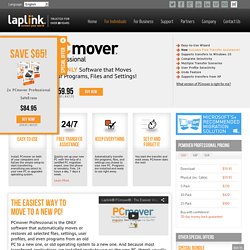 How can I move my files and programs to a new PC? I have just bought a new HP laptop running Windows 10. 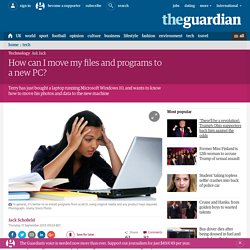 How can I get my pictures, applications, tax returns etc off the old one and onto the new laptop in the right places? Terry. Why can’t I copy large files over 4GB to my USB flash drive? Take control of your files and folders with AB Commander file manager for Windows 10,8,7,Vista, and XP. 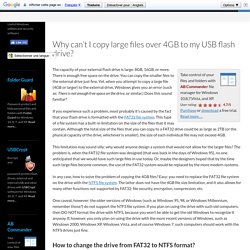 User rating: 4.7/5Purchase or download a free trial. Read more… The capacity of your external flash drive is large: 8GB, 16GB, or more. There is enough free space on the drive. If you experience such a problem, most probably it’s caused by the fact that your flash drive is formatted with the FAT32 file system. This limitation may sound silly: why would anyone design a system that would not allow for the larger files? In any case, how to solve the problem of copying the 4GB files? One caveat, however: the older versions of Windows (such as Windows 95, 98, or Windows Millennium, remember those?) The Windows 10 Anniversary Update Review. Windows 10 - You can now get Android notifications on your desktop. Windows Insiders can now read and reply to notifications from their Android smartphone – from their Windows 10 PCs. 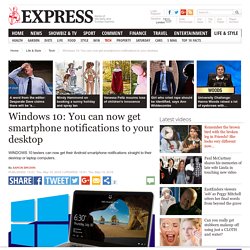 Microsoft announced the nifty new feature at its annual developer conference, Build 2016, earlier this year. But this marks the first time Windows 10 users have been able to use the functionality. Smartphone owners who want to beam notifications between their desktop and mobile need to download the latest version of the Cortana app on Android. Missed calls, text messages, and other app notifications from your Android smartphone will pop-up on your computer within a few seconds of them pinging to your smartphone. Microsoft is putting Cortana everywhere, except in new hardware. SAN FRANCISCO — Ask someone which digital voice assistant they use most and they're likely to mention Apple Siri, Amazon Alexa or even Google Now. 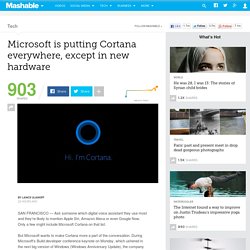 Only a few might include Microsoft Cortana on that list. But Microsoft wants to make Cortana more a part of the conversation. During Microsoft's Build developer conference keynote on Monday, which ushered in the next big version of Windows (Windows Anniversary Update), the company revealed new update to its voice-activated software. Microsoft is adding new features developers will be able to incorporate Cortana into future software, including the ability to work with Skype and Xbox One, as a part of the Windows 10 Anniversary update. While it's unclear if this could lead to a greater Cortana initiative in the future — although we've been told you'll be able to use Cortana to control smart objects in the home ("Cortana, turn off the lights") — this could be the first step. But today's updates provide a glimmer of hope for Cortana's future. How to downgrade from Windows 10 to Windows 7 or Windows 8.1.

Introduction So Windows 10 is finally here. 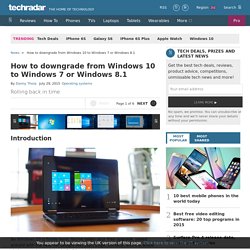 You've taken your free upgrade, poked around with the new flat design, Microsoft Edge, Cortana, and the whole shebang - yet something isn't sitting right. Whether you've run into issues with hardware, incompatible work apps, or just plain don't like the direction Microsoft went with Windows 10, you may want to consider rolling back to Windows 8.1 or 7. Thankfully, what may have been a bit of a pain in the past is now a fairly simple process. 9 reasons not to upgrade to Windows 10. Windows 10 is just about here -- and many users (especially those who have been wrestling with Windows 8) are probably eager to upgrade. 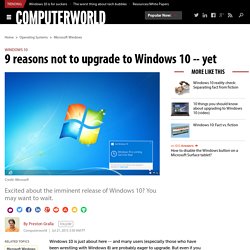 But even if you can get it now -- the upgrade will be sent first to those who signed up for the Windows Insider beta program and then in "slow waves" to everyone else -- you may want to hold off. Windows 10 is for suckers. The press likes to focus on shiny new things and the shiny thing of the moment is Windows 10. 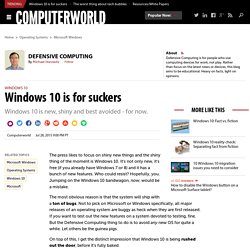 It's not only new, it's free (if you already have Windows 7 or 8) and it has a bunch of new features. Who could resist? Hopefully, you. Jumping on the Windows 10 bandwagon, now, would be a mistake. The most obvious reason is that the system will ship with a ton of bugs. On top of this, I get the distinct impression that Windows 10 is being rushed out the door, before it's fully baked. For one thing, the July 29th release date was picked before anyone could have had a feel for when the system might really be ready. Another hint comes from the frequent beta releases this month. A couple days ago, Preston Gralla noted how much the system has changed recently, writing that "This shipping version ... is much improved over the last time I reviewed it in late May. " It seems Microsoft is rushing so much they can't even tell us what the latest changes are.

Code now, document later. Here were go again. Windows 10 preview: should I upgrade? The removal of the Start menu in Windows 8 prompted a public outcry. 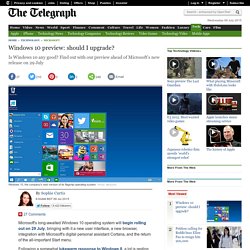 Previously used by millions of users as their first point of access to all software, the Start button was replaced with a shortcut to Microsoft's mobile interface, featuring 'live tiles' optimised for touch-based computing.