Wirify – The web as wireframes 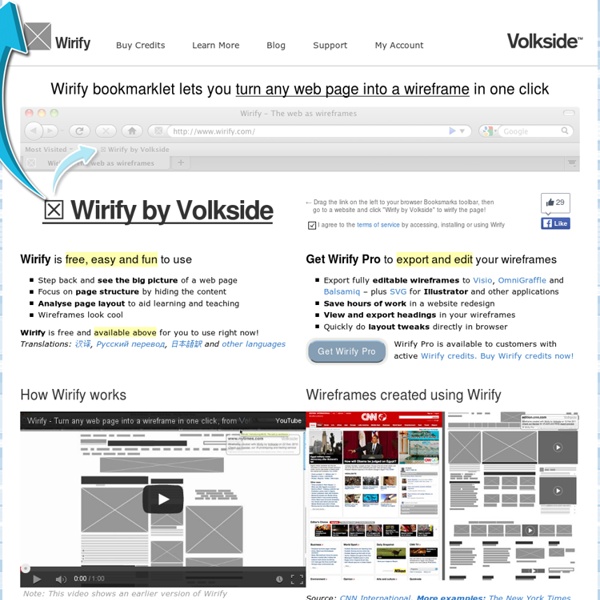 Griddify, a Tiny Photoshop Panel for Guides and Grids Griddify is tiny and fast. It helps you compose custom grid systems, vertical rhythm, and do a bunch of other stuff with guides in photoshop. Watch the short tutorial to learn how it works: Download and Install (Photoshop CC) Download and install ZXPInstaller. It helps you install Griddify and other Adobe extensions easily. Retrieve GMail's "noname" attachments There is a bug in Google Mail that sometimes gives you "noname" attachments, bizarrely encoded (it's called "appledouble"), when sent from a Mac. Google have been made aware of the problem in March 2007 and are... hum... "working on it". Here you can upload those files and retrieve them decoded. If for some reason it doesn't work, send me your noname file *zipped* and I'll see what I can do to make the script better.

Good design Back in the early 1980s, Dieter Rams was becoming increasingly concerned by the state of the world around him – “an impenetrable confusion of forms, colors and noises.” Aware that he was a significant contributor to that world, he asked himself an important question: is my design good design? As good design cannot be measured in a finite way he set about expressing the ten most important principles for what he considered was good design. (Sometimes they are referred as the ‘Ten commandments’.) Here they are. Quality software —12 non functional requirements every app should have If you're new here, you may want to subscribe to my RSS feed. Thanks for visiting! Sharebar When people talk about really great quality software, they usually think in terms of it’s utility, simplicity or aesthetics. But there’s more to it than that.

Mockups – Balsamiq Take a second. Let it sink in. The first impression might be disorienting. 20 Best Photoshop Plugins For Designers Although there are many great and free alternatives, Photoshop is still the most popular and powerful graphics editor, and the default choice of many designers, illustrators and photographers. If there’s a feature you need, but can’t find in Photoshop, don’t worry – countless scripts and plugins are available to help you extend and improve Photoshop’s functionality. Here is a selection of 20 useful Photoshop plugins for designers. Photoshop Plugins For Mockups and Layouts Freelance Contracts: Do’s And Don’ts - Smashing Magazine Advertisement In the world of freelancing, the entrepreneur has to take on a number of tasks for themselves that would normally be handled by a separate department at a bigger company. Most of these tasks are not part of the creative processes that freelance workers are used to, but rather are more tedious, left-brain paperwork. Right-brain creatives often shudder at the thought of these forays into linear domains.

Crazy Egg - Visualize where your visitors click Over 200,000 businesses Convert Better with Crazy Egg, The Original Heatmapping Technology A heatmap is an easy way to understand what users want, care about and do on your site by visually representing their clicks - which are the strongest indicators of visitor motivation and desire. A Crazy Egg heatmap lets you collect more than 88% of the data you would using a traditional eye-tracking process. At a fraction of the price. With no hardware. InRelease - Agile Release Management for TFS > Home By using Release Management for Visual Studio 2013, your development and operations teams can enable additional capabilities in Team Foundation Server 2013 so that they can more easily and more confidently configure and automate complex deployments to a variety of target environments. You can also model release processes, track approvals and sign-offs, and display release status graphically. Each person using the Release Management Client for Visual Studio 2013 for creating, updating, or deleting a release pipeline sequence must be licensed for either Visual Studio Ultimate with MSDN, Visual Studio Premium with MSDN, Visual Studio Test Professional with MSDN, or MSDN Platforms.

6 web design essentials you didn't know you needed Sometimes it's nice to stop thinking about jQuery plugins and responsive web design and treat yourself; even better if it's something that'll help you be a better web designer. And so we've rounded up six things that we think you'll love, but which will also be useful instead of just being pointless designer tat. Check them out!

10 of the Best Lorem Ipsum Alternatives Your website requires text. Few clients provide content up-front (or indeed at any point during the development process), so many of us rely on faithful sites such as Lipsum.com. But we need not burden our lovingly-crafted mock-ups with lousy latin… Blind Text Generator Blind Text Generator is a useful tool which provides Lorem Ipsum and a number of alternatives.