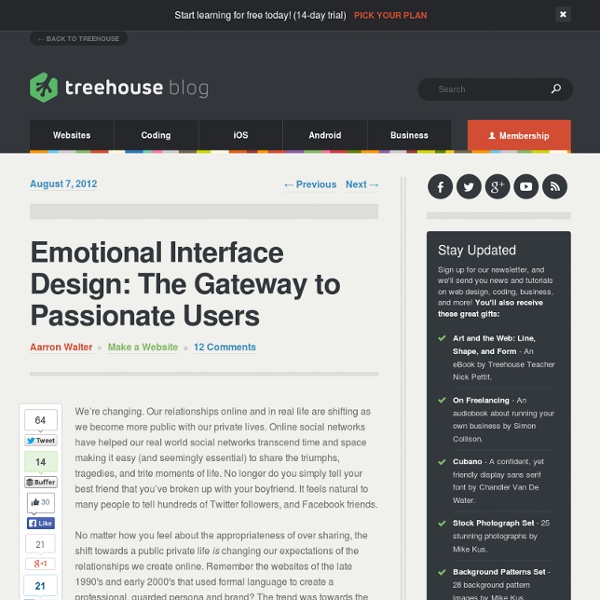 We’re changing. Our relationships online and in real life are shifting as we become more public with our private lives. Online social networks have helped our real world social networks transcend time and space making it easy (and seemingly essential) to share the triumphs, tragedies, and trite moments of life. No longer do you simply tell your best friend that you’ve broken up with your boyfriend. It feels natural to many people to tell hundreds of Twitter followers, and Facebook friends. No matter how you feel about the appropriateness of over sharing, the shift towards a public private life is changing our expectations of the relationships we create online. Figure 1: Kenny Meyers uses humor in his portfolio to connect with his audience. Oh how times have changed (figure 1). Usable = Edible We’ve spent the last decade-plus striving to create usable web interfaces. When we go out to dinner at a fancy restaurant, we’re hoping for more than just an edible meal. Figure 2: Basecamp is usable

Need Game Mechanics? I'm a fairly competitive person. I like to win. And thanks to many hours spent in front of the screen, I find myself pretty motivated when I see an opportunity to "level up." But that being said, I still question the rush lately to add "game mechanics" to every new product and experience. As we've written before, the arguments for doing so are compelling. But does the addition of levels, leader-boards, and virtual trophies necessarily lead to a better user experience? In a recent blog post titled, "Why You Should NOT Integrate Game Mechanics Into Your Service," Gaurav Mishra, CEO of 2020Social points to the ways in which the pressure to add points and badges can obscure some of the other important considerations when developing an application or service. You don't want any game mechanics you implement to distract your users away from your core service. White label game mechanics service Bunchball respond in the comments on Mishra's post with these insights: Have good core content.

The Dribbblisation of Design Only one of these weather apps is attempting to solve the real problem. There are divergent things happening in the product and interaction design community. On one hand, we have some amazing pieces of writing from the likes of Ryan Singer and Julie Zhuo, moving our craft forward. On the other hand, we have a growing number of people posting and discussing their work on Dribbble, the aggregated results of which are moving our craft backwards. This post is not about Dribbble itself, it’s about what the community on Dribbble value. “Looks awesome!” In the last year I’ve reviewed a lot of product design work from job applicants, at Facebook and now at Intercom, and I’ve noticed a worrying pattern. Much of the product design work from job applicants I’ve seen recently has been superficial, created with one eye towards Dribbble. The most important product design work is usually the ugliest In contrast, the best job applicants I’ve seen sent in their thought process. This gives us clarity.

Slow Connection So you have your Next-gen cool Web 2.0 application ready! You have tested it on your LAN environment and on your high speed internet connection – all seems ok and you are ready to deploy it in the ‘real world’. A few hours later, you get feedback that your application does not perform well on slower connections. Well the truth is that real world internet connections are much slower than you think. Now there are many tools that let you simulate slow network connections. Firefox Throttle is an extension that allows you to control download/upload rates and monitor current bandwidth utilization. The plug-in shows the current bandwidth utilization indicators in its Status panel as shown below and lets you quickly turn on/off throttling. You may also want to check out Sloppy Will you give this article a +1 ? About The Author

Frictionless Design Choices No one wants friction in their products. Everyone works to reduce it. Yet it sneaks in everywhere. Frictionless and minimalism are related but not necessarily the same. A design can be minimal but still have a great deal of friction. Minimalist design is about reducing the surface area of an experience. When debating a design choice, feature addition, or product direction it can help to clarify whether a point of view originates from a perspective of keeping things minimal or reducing friction. Product managers need to choose features to add. Therefore the real design challenge is not simply maintaining minimalism, but enhancing a product without adding more friction. When you look back you will be amazed at how the surface area of the product has expanded and how your view of minimalism has changed. There’s an additional design challenge. Low-Friction Design Patterns Decide on a default rather than options. Create one path to a feature or task. Stick with changes you make. Like this:

Adding More Features to the Like Button - Développeurs de Facebook Since it launched in April, the Like button has given you the opportunity to make your websites more social in just a few steps. Today, we’re releasing more features for the Like button to add even more value to your site. Commenting for the iFrame versionPublishing to connected users via the Graph APIMore robust analytics Commenting Now Enabled with IFrame Version Now, when a user adds a comment to the iFrame version of the Like button, a larger, more prominent story will be shared with the user’s friends. Publishing to Connected Users via Graph API We encourage websites with objects that people may want to more permanently connect with, such as a brand or product, to publish relevant updates to its connected users. If you’re publishing to more than a handful of Pages, you now have the ability to publish to multiple Open Graph Pages via the Graph API. First, get an access token for your application: We’ve updated our documentation with these new features. Analytics Frequently Asked Questions

UI, UX: Who Does What? A Designer's Guide To The Tech Industry Design is a rather broad and vague term. When someone says "I'm a designer," it is not immediately clear what they actually do day to day. There are a number of different responsibilities encompassed by the umbrella term designer. Design-related roles exist in a range of areas from industrial design (cars, furniture) to print (magazines, other publications) to tech (websites, mobile apps). Let's attempt to distill what each of these titles really mean within the context of the tech industry. UX Designer (User Experience Designer) UX designers are primarily concerned with how the product feels. "Define interaction models, user task flows, and UI specifications. -Experience Designer job description at Twitter Deliverables: Wireframes of screens, storyboards, sitemap Tools of the trade: Photoshop, Sketch, Illustrator, Fireworks, InVision You might hear them say this in the wild: "We should show users the 'Thank You' page once they have finished signing up." UI Designer (User Interface Designer)

More Transit Agencies Opening Up Their Data We’ve been following the trend of transit agencies providing developer access to timetables, routes and more for some time. Big cities, like New York and Boston are on board and helping fuel new transit applications. There now seems to be more momentum, with organizations and influencers making the call for open data. StreetFilms talked to some of these people, several within transit companies themselves, and created A Case for Open Data (embedded below). One particular case study shows just how fast developers started in on projects when Boston made its data available. “If you take the model of the national weather service and apply it to the transit agencies you realize you can have just as many ways to get transit information as you do to get weather information. When we profiled the developer who is trying to open transit data earlier this year, City-Go-Round showed 91 agencies with public data. But it’s a good sign when big metros get behind open transit data. via Jehiah

4 Reasons Why Design Is Taking Over Silicon Valley Are the fortunes of design on the rise in Silicon Valley? A resounding yes, says John Maeda, design partner at the venture capital firm Kleiner Perkins Caufield Byers. During a presentation at South By Southwest 2015 on Sunday, Maeda argued that not only is Silicon Valley taking design more seriously; design is actually taking over. Moore's Law No Longer Cuts It Starting with Flextronics' acquisition of the design consultancy Frog in 2004, the last 10 years have seen an increasing number of tech companies acquiring creative firms. This trend is only going to continue, Maeda said during his presentation, because "Moore's Law no longer cuts it as the key path to a happier customer" in Silicon Valley. Start With Design, Don't End With It With design capturing more and more venture capital dollars, there's a shift occurring in tech. The happy marriage of technology and design long predates Silicon Valley's rise. Tech Is No Longer For Techies Why Designers Are Important To Startups

ProgammableWeb (Alcatel-Lucent) ProgrammableWeb has seen many notable milestones since our inception five years ago. We were excited when the repository of APIs grew to 100 entries (now over 2000), when the count of mashups hit 500 (now nearly 5000), and seeing the myriad of ways open APIs have become such a phenomenon. And now today we are excited to say that ProgrammableWeb itself is entering a new phase of growth with the announcement of our acquisition by Alcatel-Lucent. This milestone is a great opportunity for ProgrammableWeb and our community to work with a global organization who gets what open APIs are about, who value the independence of ProgrammableWeb, and who want to grow the open API ecosystem both in the world of telecommunications and beyond. In the end this step will bring PW to a whole new level in terms of fulfilling our mission to be the go-to place for open API developers. What does this mean for the future of ProgrammableWeb? Both comments and pings are currently closed.