UI vs UX: what’s the difference? 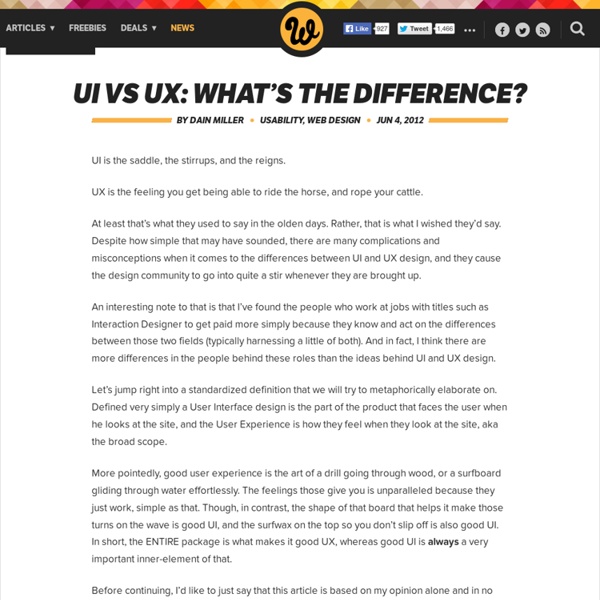 UI is the saddle, the stirrups, and the reigns. UX is the feeling you get being able to ride the horse, and rope your cattle. At least that’s what they used to say in the olden days. Rather, that is what I wished they’d say. An interesting note to that is that I’ve found the people who work at jobs with titles such as Interaction Designer to get paid more simply because they know and act on the differences between those two fields (typically harnessing a little of both). Let’s jump right into a standardized definition that we will try to metaphorically elaborate on. More pointedly, good user experience is the art of a drill going through wood, or a surfboard gliding through water effortlessly. Before continuing, I’d like to just say that this article is based on my opinion alone and in no way is trying to make large grandiose statements on the way anything should be. Let’s break it down Dan Saffer was kind enough to let us use his image. Generalities UX: designing for emotion Related:  UI/UX

Fun Stuff 2011 Here's my annual roundup of all the Fun Stuff items I linked to in the email newsletter in the past year. (Also see past annual roundups: 2010, 2009, 2008, 2007, 2006, 2005, 2004.) 2011 Fun Stuff Winner: Fantastic song made by autotuning Google Translate. You don't even need to know Chinese. Runners-up: Outstanding video: musical remix of footage from Johannesburg. Start the video 38 seconds in: watch "Dot Dot Dot", a dramatization of an online user review. How many 80s movies can you spot? Debbie Downer: funny SNL skit about a family at Disney World. A moth flies into a web. Very catchy song about learning Chinese (which I'm doing, slowly). I don't even watch the show but I loved this video by the cast and crew of Dr. All other Fun Stuff entries in 2011: Brilliant sendup of restaurant websites. A frozen card trick on Craig Ferguson, courtesy past Gel speaker Jamy Ian Swiss. Every Arnold scream from Arnold's film career so far. Entertaining remix of Luke Skywalker. Funny Robocop valentines. Wow.

How To Get Started In UX Design We’ve received quite a few emails lately from readers looking to get started in UX Design—many coming from a print background (Psst: check out our ebook, Get Started in UX, for the most comprehensive guide to launching a career in user experience design ever written). Here’s one such email, which I’ve published here with permission: I’m a traditional print-based graphic designer looking to get into UX design. I’ve a good background in the Adobe Suite and traditional print software (QuarkXpress etc). Currently I’m working within the newspaper industry and am fearing for my future, as the industry is in (probably) terminal decline. In our animated video (embedded below) I mentioned that a career as a UX Designer is interesting, challenging, rewarding, pays well, and has a low barrier of entry. What I didn’t touch on is how to get started as a UX Designer. 1) Get Educated I’m not saying you should go invest in a university degree. 2) Get The Right Tools 3) Get Some Experience 4) Get Connected

15 web sites with excellent UX User experience is greatly important in the development of a website these days. A great user experience makes sure someone visit your site and enjoy every portion of it. User experience also makes sure you can maneuver around a site and find everything you’re looking for. UX (user experience) for web design is a combination of such skills as user interface design and interaction design. Today we’ve found 15 great sites that really understand and take the time out to create a wonderful user experience. Andrew Jackson Andrew is a freelance designer based out of London. Bakken & Baeck Bakken & Baeck is a small agency based in Norway that claims to turn good ideas into great products. David Bastian David is a designer from Chile. Defringe Defringe is a site that puts together a bunch of different creative things. Design Embraced Design Embraced is the home of Art and Creative Director Anthony Goodwin. Eskimo Eskimo Creative is an award winning agency based in Manchester. FS Emeric Harry’s

4 Elements That Make A Good User Experience Into Something Great In the main, entries to this year’s Interaction Awards were good. The apps, the websites, the interfaces, and the games were slick and sleek. For the most part, they checked the design boxes we have all come to expect. Sure, some seemed to have beamed in from the early days of Netscape, but overall, buttons, pushed, sent you somewhere you thought you might go. Screens, swiped, loaded the information you expected to see. So far so good, right? As it happens, some clues about the future of the discipline lay among the category winners in the awards program (of which I was a juror). Building Platforms Best in Show went to "Loop Loop," a musical application for Sifteo, which neatly turns the 1.5" blocks into a tiny interactive music sequencer. Moving Beyond the Screen The People’s Choice award went to "Interaction Cubes" by Fundação Oswaldo Cruz/Museu da Vida, from Rio de Janeiro. Seamlessly Integrating Data Empowering the User

How the touch screen revolution is impacting UX The introduction of Windows 8 saw a massive overhaul of the Windows user interface in line with the Windows Phone interface in order to be more intuitive for people using touch screens, and Apple have subtly been adapting OSX over time, streamlining features that are becoming increasingly shared across their mobile and desktop operating systems. Whilst we have yet to see a touchscreen Mac, it’s obvious that the touch screen revolution is looming upon us with users spending more and more time on their mobile devices than home PCs. With this in mind and an ever increasing proportion of browsing taking place on smartphones and tablets, websites must decide how they will adapt to people accessing their content without a mouse and keyboard. Whilst the default response to this has often been ‘just make a separate mobile interface!’ This article will take a look at a number of sites that have gone down both unconventional and standard site designs to become more touch-friendly. Radial menu

A List Apart: Articles: Responsive Web Design The English architect Christopher Wren once quipped that his chosen field “aims for Eternity,” and there’s something appealing about that formula: Unlike the web, which often feels like aiming for next week, architecture is a discipline very much defined by its permanence. Article Continues Below A building’s foundation defines its footprint, which defines its frame, which shapes the facade. Working on the web, however, is a wholly different matter. But the landscape is shifting, perhaps more quickly than we might like. In recent years, I’ve been meeting with more companies that request “an iPhone website” as part of their project. A flexible foundation#section1 Let’s consider an example design. But no design, fixed or fluid, scales seamlessly beyond the context for which it was originally intended. In short, our flexible design works well enough in the desktop-centric context for which it was designed, but isn’t optimized to extend far beyond that. Becoming responsive#section2 media types