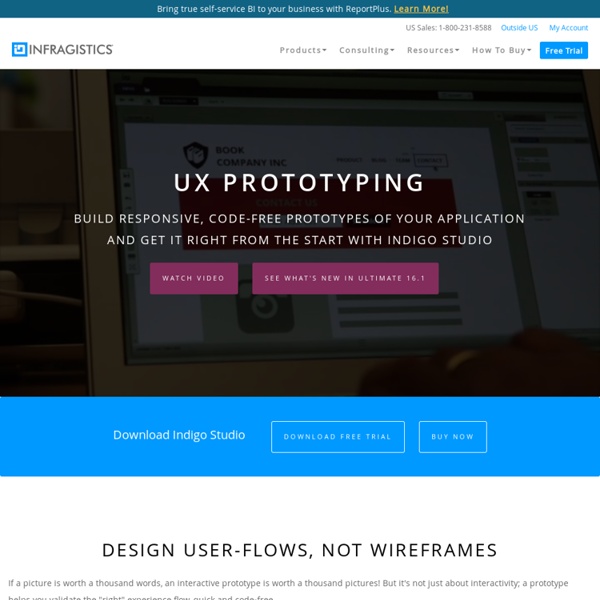 Indigo Studio – the fastest UI prototyping and interaction design tool - helps you quickly and simply explore and create functional, animated UI prototypes while maintaining the focus on user experience at every step. With Indigo Studio you can create storyboards with over 100 different scenes, wireframes with built-in interactive controls, and prototypes for your desktop, web, and mobile apps – all with no coding necessary! With the new features in Indigo Studio, designing prototypes for mobile devices has never been easier. With full support for any device that runs HTML5, including iOS devices, users will now be able to utilize supported touch gestures, document designs with PDF support, design storyboards with real-world usage context, rapidly prototype interactive app designs, and design fully functional, animated UI prototypes. See what Indigo Studio can do for you! Watch Video

annyang! Easily add speech recognition to your site Go ahead, try it… Say "Hello!" Annyang! Let's try something more interesting… Say "Show me cute kittens!" Say "Show me Arches National Park!" 5 of the Best Prototyping Tools to Test Your Web and Mobile Designs Free Bonus Guide: Trying to find the perfect prototyping tool? This comprehensive guide compares more than 10 of the best prototyping tools in the industry — to help make your life easier. Download your copy now. Over the past few weeks, we’ve been sharing some of our favourite resources to help refresh your web design toolkit. So far, we’ve focused on tools that help you discover new design assets for your latest projects — in particular, free stock photography and visually stunning fonts.

Designing For Android Advertisement For designers, Android is the elephant in the room when it comes to app design. As much as designers would like to think it’s an iOS world in which all anyones cares about are iPhones, iPads and the App Store, nobody can ignore that Android currently has the majority of smartphone market share and that it is being used on everything from tablets to e-readers. In short, the Google Android platform is quickly becoming ubiquitous, and brands are starting to notice. But let’s face it.

Blog « Catspaw Dynamics AssignmentEarth.ca Relaunched Gary Seven, Roberta Lincoln and Isis the Cat The web’s most complete site on this back-door pilot from Star Trek gets its seventh major update, with new design and content. A/B Testing: The Complete Guide - Visual Website Optimizer Start here for What is A/B Testing? A/B testing (sometimes called split testing) is comparing two versions of a web page to see which one performs better. You compare two web pages by showing the two variants (let's call them A and B) to similar visitors at the same time. The one that gives a better conversion rate, wins! All websites on the web have a goal - a reason for them to exist.

Prototyping Tools Justinmind is a flexible prototyping tool that supports many devices and works well for simple click-through prototypes or more complex interactions. Prototypes can be created from existing mocks or by building screens out within Justinmind using libraries of standard assets. Update: Justinmind now supports the simultaneous execution of events. Device-specific templates and features. How Smartphone Usage Changes Over Time and By Income Group Jeff Sauro • December 3, 2013 What would happen if you gave a few dozen people a free iPhone AND cell service for one year and then monitored their usage? This isn't some story about the NSA, instead, it's longitudinal research that was actually conducted at Rice University and reported last year [pdf]. Much of the data we have on mobile usage comes from snapshots in time or perhaps from over a few weeks. But as anyone with a smartphone knows, how you used the phone the first day you got it differs from how you used it on the 300th day.

mise-en-scene Sketches of Ridley Scott's work inform his moviemaking By Mike Snider, USA TODAY Directors routinely offer a peek into the filmmaking process on the home video versions of their movies. Ridley Scott opens his sketchbook, too. Guidelines for Building Touch-friendly Sites - IEBlog In Windows 8 Consumer Preview, IE10 enables fast and fluid multi-touch experiences on the Web. Most sites work fine with touch in IE10 with no changes to the site. This post provides four simple guidelines to ensure your customers who use touch can most effectively use your site. We’ve written before about how new input devices and touch screens make the Web more fun, interactive, and immersive. We’ve also talked about the importance of ensuring a no compromise browsing experience in IE10 so the real Web works great with touch. Of the four guidelines below, the first two make sure touch users can access all of your site’s functionality.

Framer & Sketch: An Intentional Workflow — Facebook Design Framer & Sketch: An Intentional Workflow Making Framer prototypes can communicate what a final product will feel like early in the design process. I find working with Framer rewarding because it forces me to think through the logic and flow of a design in a very tangible way. Building a prototype also helps me gain empathy for some of what engineers will go through when building the product. If it’s difficult to figure out the interactions in Framer, there is probably some sort of fundamental flaw or ambiguity in the design. I make a lot of prototypes and they tend to be long flows with many different states. Facebook Code Started over a year ago · Updated on Friday Buck is a build system for Android that encourages the creation of small, reusable modules consisting of code and resources. Because Android applications are predominantly written in Java, Buck also functions as a Java build system. Buck can help you speed up your Android builds. Buck builds independent artifacts in parallel to take advantage of multiple cores.

Temple of the Seven Golden Camels First off, I'd like to say that I apologize for not posting as much in 2012 as I'd like. I will sincerely try to do better in 2013. I still love writing posts, but it takes a lot of time and energy and I've definitely used much of the energy I used to put into the blog to work on my graphic novel over the past two years. Speaking of which, this post is about comic book artwork and observations from someone who is not all that familiar with the history of comic books and comic book artwork in general, so forgive my naivete when it comes to talking about this stuff. Somebody more knowledgeable can correct me where I go astray...The use of black areas in comic books I was never really a big reader of comic books when I was a kid.